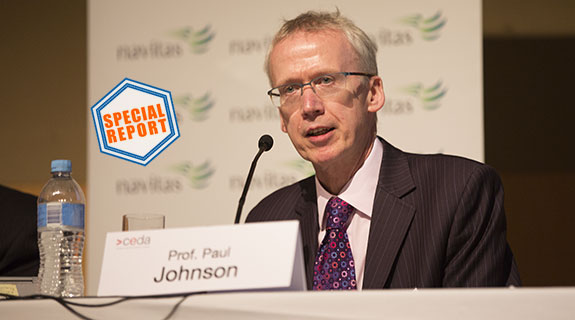 Ever since 1994, when Rod Jones established his first college in Perth, he has been providing services that universities have been unable or unwilling to deliver.

The Navitas chief executive now heads up a global education services business, and he’s worried by what he sees.

“The system is broken in the sense that kids are getting an education that is not preparing them for the future,” Mr Jones told an EY lunch last week

Mr Jones said technological change meant most of the jobs that now existed would disappear during the next 10 to 15 years.

“We need to teach people how to think, how to be critical thinkers, how to act independently,” he said.

“In terms of technological skills, the kids are just not being given what they need.”

Mr Jones said universities were changing but struggled to keep up.

“It’s all speeding up, it’s coming at education like a tsunami,” he said.

“I believe the degree as it exists today will not exist in 10 years’ time, it will be more of a modular system where people will come in and out of education and constantly be upskilled, to deliver the skills that are needed as new jobs develop.”

“Digital disruption and use of technology is one driver of change, but also students and their expectations are changing very dramatically and rapidly,” Professor Leinonen told Business News.

Professor Leinonen said enacting change in large organisations was always difficult but believed the sector in general was keeping up.

“I have witnessed a huge amount of change in the last 10 years and in that time I’ve worked in three different universities,” she said.

Professor Leinonen pointed to the work of Murdoch’s curriculum commission as a good example of forward thinking.

“All students will have an opportunity to study outside their own discipline, and they will all study research methods and data analytics,” she said.

The University of Notre Dame Australia vice-chancellor Celia Hammond believes that has been a strength of the Fremantle based-institution.

“We have a big emphasis on practicums, I think more than other universities,” Professor Hammond said.

She said Notre Dame had been focused from its early years on working closely with industry and professions through advisory boards.

“It doesn’t happen overnight,” she said.

“Universities are not known for their ability to enact change.”

Curtin University vice-chancellor Deborah Terry said although the core role of universities had remained essentially unchanged for centuries, technology was now fundamentally changing the way they engaged with students, collaborators, and industry partners on a global scale.

“The challenge for universities is to embrace this technological disruption and focus on ensuring not only that we deliver on the value-add of the campus experience in the 21st century, but provide students with the skills and capabilities that they will need,” she said.

Professor Terry said this included reconceptualising the campus experience so that face-to-face experiences were genuinely value-add.

“We also need to be in the position to provide study opportunities that are delivered in a way that meets the need of graduates seeking to up-skill and prepare themselves for new jobs and careers,” Professor Terry said.

“In other words, in the future, our face-to-face experiences will need to be seamlessly blended with the digital so that our offerings are flexible, personalised and available both inside and outside the classroom.”

“What you are going to see in future is a blended system, that depends on what quality or what experience you want at university,” Professor Chapman said.

He said traditional university colleges would continue to operate, and students would pay a premium for that, while independent online courses would sit at the other end of the spectrum.

“There will be a massive blend between the two extremes; universities that are flexible enough to adopt all of them will do well,” Professor Chapman said.

He said a relatively young institution like ECU might be better able to adapt and thrive than an older university.

“I can image a university like ECU in 20 or 30 years with, say 30,000 students in Perth but 90,000 students overseas who have never been to Australia and never will come to Australia, but are getting an ECU degree.”

“I believe half of Australia’s universities will not exist in their current form in 10 years’ time,” Professor Johnson told Business News.

Professor Johnson said that unlike most other industries, the university sector had not seen the emergence of global leaders.

He believes existing universities will in most cases continue to be relatively small and localised.

The biggest challenge, he suspects, will come from new entrants, and mulls on the possibility that a company like Google or Apple could be the biggest disrupter.

“What if a high-value brand in the technology space set up a new university?” he asked.

Professor Johnson said a new online university could tap into a global market, using internet-based learning in tandem with local firms that would be licensed to provide face-to-face teaching.

Another possibility is that new entrants would be licensed to use laboratories and other facilities in schools, thereby avoiding big investments in physical infrastructure.

The success stories, he believe, will establish a premium brand and be able to charge a premium price.