Australia’s big four banks could be reduced to one within a decade, in an extreme scenario, as Western countries follow moves in China towards the mass adoption of social media-based payment systems, according to a New York University professor visiting Perth. 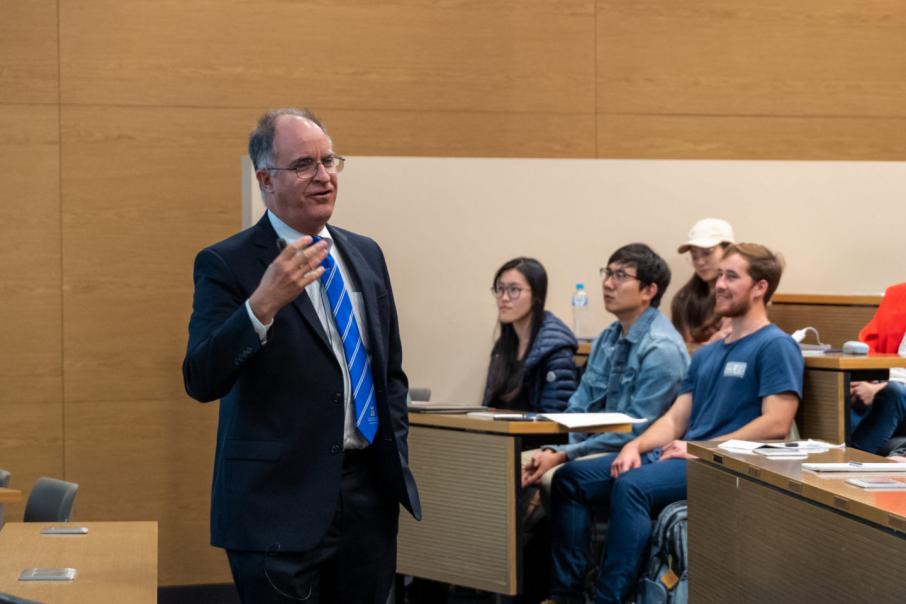 David Yermack says the rise of digital currencies and new payment platforms is one of the most interesting things to happen in his lifetime. Photo: Frank Liu

Australia’s big four banks could be reduced to one within a decade, in an extreme scenario, as Western countries follow moves in China towards the mass adoption of social media-based payment systems, according to a New York University professor visiting Perth.

The rapid uptake of Wechat and Alipay in China showed what Australian financial markets could face in the near future, NYU professor of finance and business transformation, David Yermack, told an audience at The University of Western Australia last night.

In March, China Daily reported mobile payments in China were worth $US41.5 trillion in 2018, up 27-fold from five years prior.

The move to payments through social media platforms would have a big impact on banks, Professor Yermack said, because reserves were effectively being withdrawn from traditional institutions and coming under the control of alternative payment providers.

There was no guarantee how the new platforms might allocate those reserves, he said, meaning there would potentially be an impact on the money supply across the economy.

In China, the draining of reserves added to pressure on traditional banks.

Facebook has been the first mover in this space outside China, having announced its Libra cryptocurrency in June this year.

A cryptocurrency is a digital means of exchange underpinned by a decentralised ledger, or blockchain.

Facebook hopes to make it a global payment system, with transactions to easily flow across borders.

The company has signed up partners to the project, including Paypal, Mastercard, and Vodafone, with an aim to raise about $1 billion.

They form the Libra Association, a not for profit registered in Switzerland.

Libra coin will be live as early as next year.

He said social media businesses may have a comparative advantage in managing electronic currencies and do a better job than central banks .

They would have less incentive to create inflation, they have big user networks with frequent engagement, and they possess expertise in computing infrastructure and security, Professor Yermack said.

Ultimately, it would come down to which organisations were more trusted by customers – traditional financial institutions or new media.

In the case of central banks, Professor Yermack suggested they had persistently managed to generate economic crises through poor monetary policy choices.

On the other hand, social media companies seemed incapable of even filtering fake news.

Central banks would also be concerned about the loss of control of the economy currently exercised through monetary policy, he said, and the ability to earn a fee for printing cash.

Meanwhile, central banks have been thinking about moving to blockchain to underpin their own payment systems.

Research by the Bank of England in 2016 predicted central bank digital currencies would raise GDP by as much as 3 per cent.

China has been an early mover here, too.

The People’s Bank of China plans to launch an official cryptocurrency before the year is out.

All of this will raise a variety of issues, leading Professor Yermack to describe the transformation as probably the most interesting thing to happen while he’s been in the field of economics.

One question was whether a digital currency should have a public ledger, meaning all transactions would be visible, or a private ledger, where nefarious activities might be harder to stop, he said.

Facebook had disavowed implementing its own monetary policy, yet also planned to peg the Libra to a basket of currencies, which would require a level of management, Professor Yermack said.

There was also a question of Facebook’s intentions in creating this currency as a non-profit organisation.

The company might earn interest revenue from investing the system’s reserves, Professor Yermack said, transaction fees, or use the currency as a loss leader for its online shopping endeavours.