Ardiden Limited has pulled out its exploration tool-kit as it ramps up its field program at Pickle Lake in Ontario, Canada. The company is deploying a raft of innovative exploration techniques as it tracks down the hidden gold endowment within its tenure. The program has included the use of drone-based geophysical surveying, surface geochemistry and ongoing drilling over the high-grade Kasagiminnis gold deposit. 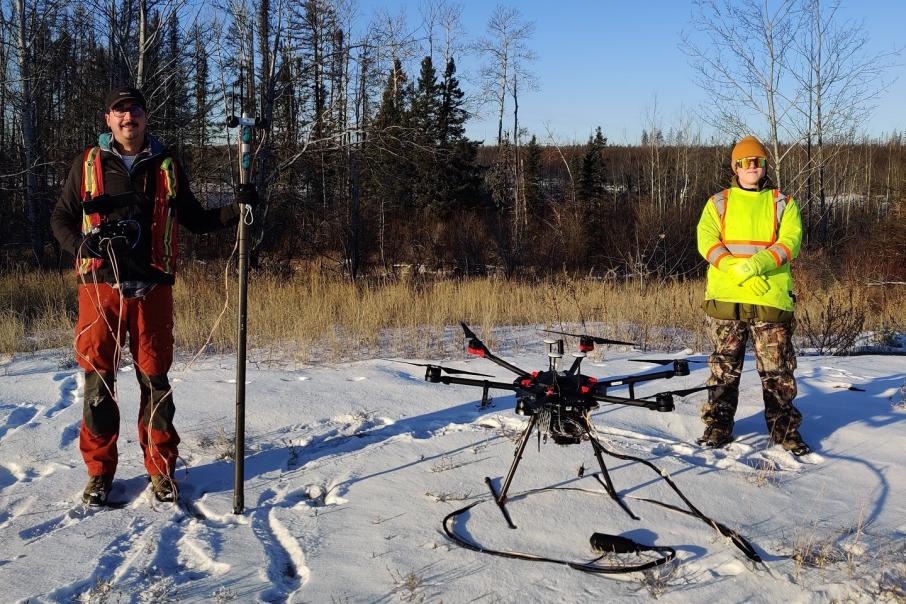 Ardiden Limited has pulled out its exploration tool-kit as it ramps up its field program at Pickle Lake in Ontario, Canada. The company is deploying a raft of innovative exploration techniques as it tracks down the hidden gold endowment within its tenure. The program has included the use of drone-based geophysical surveying, surface geochemistry and ongoing drilling over the high-grade Kasagiminnis gold deposit.

The company is set spread its wings across its nearly 900 square kilometres of ground holdings in the gold-rich Pickle Lake district, with work now extending to the South Limb project, 17km to north-east of Ardiden’s Kasagiminnis deposit.

The South Limb project covers around 9km of south-eastern strike extensions to the Dona Lake gold mine. The historic high-grade operation was run by Newmont between 1987 and 1993, producing more than 246,000 ounces of gold. The underground mine set about exploiting the banded-iron, sediment hosted ores down to 450m below surface. The mineralisation at Dona Lake is reported to have averaged a rich 6.6 grams per tonne gold.

A review of the historical exploration in the district has identified more than 26 prospects requiring investigation within Ardiden’s tenure, with the two key targets at the East and West Blocks being first cab off the rank.

The “East Block” prospect hosts the southern extensions of the Dona Lake mine, whilst the “West Block” prospect is highlighted by a shallow drill result from 1983 which returned a curious 0.5m at 7.8 g/t gold from only 8m below surface.

Ardiden’s preliminary work program over these two prospects has included the innovative use of drone technology, utilising a UAV to reduce costs and undertake a detailed airborne magnetic survey over both targets. The surveys covered more than 73-line kilometres defining a bevy of drill targets over the prospect areas.

Surveying of the East Block has outlined the potential strike extensions of the Dona Lake mine with the surveying tool registering magnetic readings of up to a massive 140,000 nano-teslas, which is indicative of the target banded iron stratigraphy in the region. Interestingly, the readings from the underlying iron units proved strong enough to interfere with the navigation system on the drone, presenting a target now deemed worthy of immediate follow up.

The program at East Block has highlighted three geological trends, each more than 1km long, with Ardiden now planning drilling over these highly responsive targets.

The survey over the West Bloc also bore fruit, outlining buried banded iron targets, that have only been partially tested by the previous drilling, highlighting a 1km long structural trend for future drill testing.

Elsewhere within the company’s Pickle Lake project, exploration has continued over various prospects with work identifying a rash of opportunities to expand upon the company’s ground position.

The uber high-grade Golden Patricia mine lies in the west of the Pickle Lake goldfield and was one of the highest-grade producers in the region, pumping out over 600,000 ounces between 1988 and 1997 at an impressive grade of 15.2 g/t gold.

Ardiden’s new holding along the Dorothy-Dobie Trend, delivers Ardiden more than 50km strike of the gold-bearing Bear Head Deformation Zone, north of the Golden Patricia mine, and is contiguous with the company’s existing tenure in the region.

Diamond drilling also continues at the company’s flagship Kasagiminnis gold deposit, with the next highly anticipated flush of results expected in the coming weeks. These next results follow up on the first round of results from this program, which included 6m at 4.23 g/t gold from 190m, including 2m at 9.53 g/t and 6.5m at 4.28 g/t from 159.5m.

The Kasagiminnis deposit already boasts a high-grade resource of 790,000 tonnes at 4.3 g/t gold, for 110,000 ounces, with the ongoing drilling program aimed at increasing this position as work continues into 2021. The company has put an “exploration target” of 4 million to 5.8 million tonnes at between 3.9 g/t and 6.6 g/t gold, on the deposit as it continues to drill up a storm into the northern hemisphere winter.

In addition to the diamond drilling program at Kasagiminnis, the company is undertaking orientation soil surveys over known gold mineralisation surrounding the deposit as it seeks to expedite the targeting of exploration across the mineralised stratigraphy in the region.

Ardiden’s Kasagiminnis deposit forms the centre piece to the company’s Pickle Lake gold project in northwest Ontario - an established mining jurisdiction in Canada. The company’s tenure covers more than 90km of strike and 897 square kilometres of highly prospective Archean greenstone which has previously demonstrated a rich endowment of gold.

Mining in the region through the 1980s and 1990s produced more than 3 million ounces of high-grade gold, with prominent local operations including the Pickle Crow, Central Patricia and Golden Patricia mines – a trio of high-grade discoveries Ardiden is no doubt hoping to emulate.

With the company continuing to build a solid pipeline of prospects and drill targets through its Pickle Lake gold project, the snow of winter is approaching. Accordingly, Ardiden appears to be picking up speed with a flurry of surveying and sampling set to deliver a growing snowball of results in the lead up to Christmas.