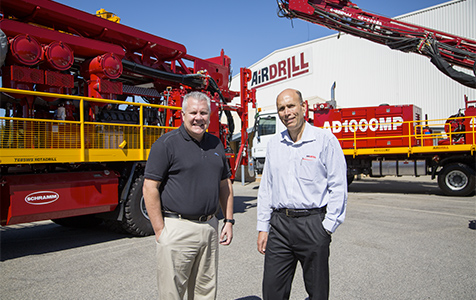 Welshpool-based exploration drilling equipment manufacturer Airdrill says it will reach a broader international customer base after being acquired by global drilling group Schramm, in a deal described by both companies as mutually beneficial.

Financial terms of the transaction, which was finalised in late November, were not disclosed.

Airdrill was established in Bayswater in 1969, and has since grown to lodge annual turnover of about $70 million, employing 50 staff.

The company estimates it supplies about 80 per cent of the mineral exploration drilling market in Australia.

Henceforth the company will be known as Airdrill: A Schramm Company.

Airdrill chief executive Andrew Gilbert said the transaction originated from the two companies’ long-standing relationship, which began around 15 years ago.

“We’re good friends and good partners, we’ve done a lot of business together and this presented as an excellent opportunity to broaden the markets that we could address as a company,” Mr Gilbert told Business News.

“Being in Australia, you tend to be a little bit sheltered, and with Schramm being a global organisation, a much larger market is available.”

Mr Gilbert said the deal with Schramm would also be beneficial for Airdrill clients through increased economies of scale and access to new products, potentially driving down costs.

“The manufacturing costs that you endure in Australia are quite significant,” he said.

“We’re not going to take manufacturing entirely way from Australia because there will still be things that we do well, but it’s an excellent opportunity to get some cost reductions by volume and leverage Schramm’s purchasing power, which is a lot larger than ours.”

One of the new products that will be made available to the Australian market is Schramm’s new T500XD onshore oil and gas drilling rig, which is capable of drilling 4.8 kilometres deep.

The rig has hydraulic feet, which allow it to shuffle along bore holes without having the need to dismantle and reassemble any machinery, as well as remote visual connectivity and reprogramming capabilities.

Airdrill has already sold one of the rigs to an Australian customer, with delivery expected to occur midway through the year.

Under the terms of the transaction Schramm will sell Airdrill-developed hammer and drill bits in new markets in both North and South America.

Schramm president Edward Breiner, who is currently visiting Perth but is normally based in West Chester, Pennsylvania, said the company had a 40-year presence in the Australian market, and the acquisition of Airdrill was a logical next step.

“With Australia being the number one country in terms of revenue for our products, it was an opportunity to expand our presence in Australia and get closer to the customers in Australia,” Mr Breiner told Business News.

“In the case of Airdrill and Airdrill hammers and bits, we will take product that they’ve developed over the years that is innovative and market leading, and introduce it to regions of the world that heretofore they haven’t had a presence in.

“It diversifies our revenue stream and gives us a consumable product that has repeat business to it, unlike the large capital goods like drill rigs.”

Mr Breiner said the acquisition of Airdrill was a good example of partners working together in the market coming more closely together.

“We have collectively introduced newer technologies into markets that we’ve served, focused on worker safety, ergonomics, the use of electronics and hydraulics to provide greater productivity and do things faster, smarter and safer, and this is an opportunity for the companies to get closer on that,” he said.