A galling lack of subtlety

Colin Barnett’s tough talk on iron ore has all the hallmarks of a government fearful of losing control of the narrative. 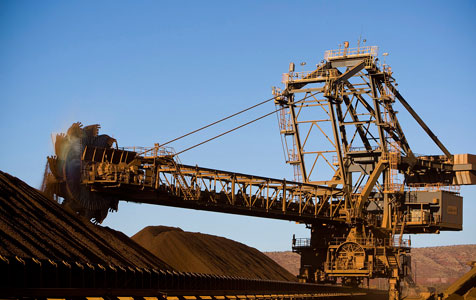 DOWN DOWN: The state government is scrambling to rescue its budget position, as falling iron ore prices hurt the bottom line.

Something closely resembling panic has surfaced within the upper echelons of the Barnett government.

At the core of this nervousness is a miscalculation/overestimation of the world’s iron ore price, which will have a major impact on the 2014-15 budget.

If all these occur, Mr Barnett’s ambition to romp home at the 2017 state election won’t happen.

How then, did the government get it so wrong, and could the current circumstances have been foreseen?

When the premier triumphantly announced the go-ahead for a $1 billion Burswood football stadium and the development of Elizabeth Quay, a contact with longstanding expertise in the Pilbara and in global steel markets described both to me as ‘foolhardy big- spending’.

Since then Mr Barnett has unveiled the $2.2 billion Forrestfield-Perth Airport rail link, which includes an eight kilometre underground segment.

It’s likely the decisions to proceed with these grandiose infrastructure spends were based on an assumption that iron ore prices would remain around $120/tonne for the foreseeable future, rather than slide to the current price around $80/t.

That sort of miscalculation is one reason Western Australia’s public debt has risen from $3.6 billion in 2008 under Labor treasurer Eric Ripper, to the $29 billion expected by 2018 under the trajectory set by the Barnett government – a trend that baffles financially savvy observers, including my contact.

In an update last week, my contact outlined further concerns about the period ahead.

“Australian iron ore sales to China are likely to halve and the price will halve,” he wrote.

“So revenue will be a quarter of what it is now, which is already off a lot.

“Australian governments are still spending like the party will go on forever.”

This followed Mr Barnett’s bombastic warning to BHP Billiton and Rio Tinto, which he says should share responsibility for the price slump from $120/tonne that’s wiping $2 billion off his projected budgetary revenues.

Not mentioned by the premier in his recent broadside was that the slump may be due to declining Chinese steel mill requirements, or Beijing’s highly suspect banking and credit sector.

Instead, Mr Barnett publicly objected to both miners increasing outputs and warned that a higher royalty regimen to help balance his books could result.

“This strategy of the two major producers to flood the market and force the price down, I mean, remember who your landlord is,” Mr Barnett said.

“I think it is flawed in trying to manage the world price of a commodity.

“When anyone has tried that, whether it’s been minerals or agriculture or anything else, it usually ends it tears.

“Right now there are tears within the Western Australian government.”

Mr Barnett’s ‘landlord speech’ didn’t go down too well with BHP or Rio, or with my contact.

What is now happening in the Pilbara, he said, occurred when Japanese mills overestimated their needs.

Consequently during the 1980s and 1990s, right up to 2003-04, the Pilbara’s iron ore sector basically operated at levelled-out outputs with lower margins.

In other words, Pilbara producers cut their cloth accordingly.

The question that therefore remains is whether Mr Barnett is doing likewise, rather than looking around to blame others for his own miscalculations that have led to the shedding of 1,500 public servants and the sale of public assets.

Nor is the Barnett-driven state debt, even though global interest rates are lower than before the GFC.

According to Alberto Calderon, one of BHP-Billiton’s senior boffins during Marius Kloppers’ years as CEO (2007-13), today’s market has entered a “different phase” (Australian Financial Review, October 13 2014).

Mr Calderon said the iron ore price multiplied by a factor of seven from 2002 to 2008.

“We lived through the highest growth of the largest country in the world,” he said.

“We will never see again what we saw in the past 10 years.

“We’re going back to normal … that normalcy means, again, much lower margins.”

That’s precisely what my contact has been warning of for at least two years.

Unfortunately, neither Mr Barnett nor, it appears, his treasury boffins can claim such prescience.

Clearly they, like the federal Labor governments from 2007-13 expected Australia’s era of high mineral prices to last forever.

Landlord-style threats are a sure way of strangling the golden goose.

Wouldn’t cutting your cloth accordingly, as the Pilbara’s miners so stoically did for 25 years, have been the smarter and more civil way of conducting oneself?