A Perth based ASX listed junior has quietly been sweeping up big swathes of lucrative acreage in Alaska’s hottest oil province known as the North Slope with the truth diviner in the form of a drill rig about to be put to the test in coming months. 88 Energy will soon drill a well targeting up to 400 million barrels at its Western Blocks project in the region. 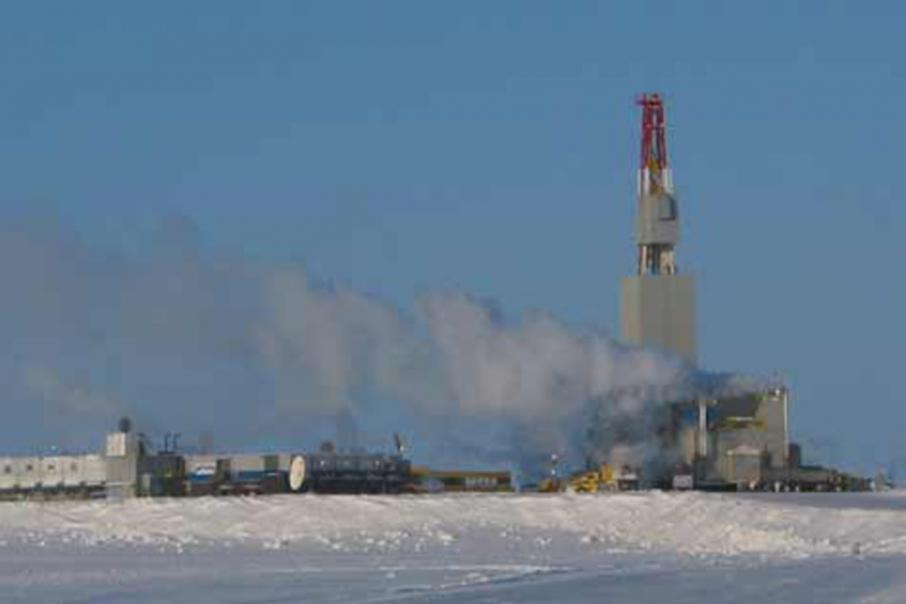 Alaska’s famed “North Slope” oil province has traditionally been the stomping ground of the super-majors who have collectively found and developed multiple billion barrel oil fields in the region, the largest of which is the massive Prudhoe Bay field that has produced some 15 billion barrels of oil over the last 40 years.

Whilst the really big finds were largely made in the early days of the North Slope, recent activity – spurred on by advances in seismic, drilling and completion technology, have driven a renaissance in the area with previously undeveloped finds now being considered for production and new discoveries being made.

88 Energy, a small cap Perth based ASX listed company has been quietly sweeping up large swathes of lucrative looking acreage on the North Slope with a view to applying modern exploration techniques to ground that is known to be prospective for oil in the region.

Whilst a number of truly massive fields have already being found and developed on the North Slope, there remains substantial potential for more discoveries in the area with global information provider IHS Markit estimating that it could still host 28 billion barrels of recoverable oil.

More than 4 billion barrels of oil have been discovered in the last five years alone including the 1.2 billion barrel Horseshoe find by Repsol and Armstrong Energy and ConocoPhillips’ 300 million barrel Willow discovery.

These, and other recent discoveries,  exceed the 2005 United States Geological Survey estimates for North Slope Brookian ‘yet-to-find’ oil resources and indicates that there is overlooked oil resource potential south and in the shadow of the Barrow Arch that is a known oil trap.

According to 88 Energy, modern fracture stimulation techniques that have been refined in the US could unlock the potential of several oil-bearing regions on the North Slope that were previously thought to be uneconomic.

There is also substantial infrastructure in the region with the gradual decline of Prudhoe Bay resulting in plenty of spare capacity on the Trans-Alaska Pipeline System that runs 800 miles from the town of Deadhorse to the port of Valdez.

This exciting climate has drawn one of Australia’s largest petroleum companies, Oil Search, to the North Slope after it acquired an operating interest over the Horseshoe field in March 2018 from Armstrong.

Whilst Oil Search is considerably more cautious than its partners – assigning a figure of just 500 million barrels to Horseshoe, it nonetheless believes there is far more oil lurking around the area and is planning a two well  drilling campaign in early 2019 to prove its point.

Other transactions in the region, including ConocoPhillips’ asset swap with BP in May this year and ENI’s recent purchase of Caelus exploration acreage last month, further highlight the growing activity in the North Slope.

88 Energy has spent the last four years building up its significant acreage position on the North Slope at the unbelievably low price of just USD$30 per acre at a time when oil prices were still depressed.

The company has now acquired four exploration projects across 355,000 net acres in Alaska, all of which is ground that is known to have historic oil potential.

With Brent crude oil prices trending well above USD$70 a barrel now and a treasure trove of new exploration techniques at its fingertips, the stars are starting to align for 88 Energy who has clearly been deploying a countercyclical strategy during the down years on the North Slope.

The company is looking to drill a high impact exploration well on its Winx prospect at the Western Blocks project early next year and it has two farm-outs pending over its conventional and unconventional prospects at the Icewine project.

88 Energy is paying for 40% of the drilling costs for a USD$15 million initial exploration well at its Western Bocks project in partnership with fellow Australians Otto Energy and Red Emperor Resources.

Western Blocks is adjacent to Oil Search’s Horseshoe discovery that is just 4 miles to the west and will no doubt create some nearology excitement for the ASX listed junior.

The Winx prospect was identified by 3D seismic with a similar amplitude signature to that seen at Horseshoe. The Winx-1 well that will be drilled in the first quarter of 2019 will target a gross, best estimate, un-risked prospective resource of about 400 million barrels of oil in the stacked Nanushuk, Seabee and Torok formations.

88 Energy will fund its share of drilling at Winx-1 from its existing cash reserves of USD$11m, as at June 30.

According to the company, Winx-1 has a geological chance of success of 25% to 30%.

Icewine also benefits from easy access to the Trans-Alaska Pipeline System, which runs straight through the project.

88 Energy is looking to farm-out its conventional portfolio, which contains multiple stacked prospects, before the end of the year and the unconventional play in the first half of 2019. The company has an 80% interest in the conventional project at Icewine.

3D seismic shot over only 25% of the project has already allowed the company to upgrade a number of conventional leads into drillable prospects.

88 Energy also has a 100% interest in the existing Yukon Gold oil discovery that was made in 1993 close to existing infrastructure.

Initial mapping from 3D seismic at Yukon Gold has been encouraging and 88 Energy is seeking to work out the project’s prospectivity with minimal expenditure on its part before finding a farm-out partner.

88 Energy is about to undergo a potentially transformative period with a number of its North Slope projects about to be tested one way or another.

With such large neighbours just over the fence, a single discovery in this most lucrative of regions could remake this ASX listed junior.

With plenty of activity to come in the next few months, excitement should start to build around 88 Energy now.