A Western Australian World War II veteran who passed away earlier this year at the age of 103 has donated $3 million to Murdoch University from his estate. 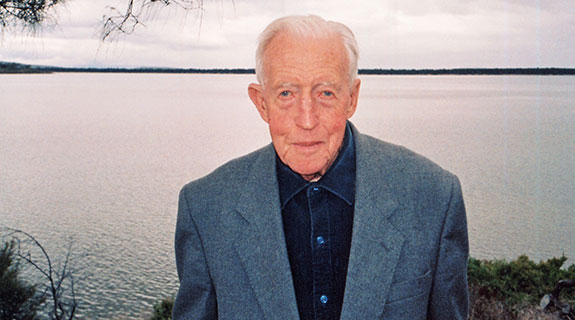 A Western Australian World War II veteran who passed away earlier this year at the age of 103 has donated $3 million to Murdoch University from his estate.

Alan Villiers Peacocke has been acknowledged as a great friend to the university by acting vice-chancellor Andrew Taggart, who said his gift was the biggest single bequest the university had ever received. Mr Peacocke's donation will provide a perpetual income stream for the foundation he set up in 1999 in his and his sister Iris’s names, to provide scholarships to doctoral students in the areas of agriculture, horticulture and medical research.

He said Mr Peacocke, who approached the university regarding a donation, was unlike anyone else he had ever met.

Mr Peacocke said he wanted to use the money he had spent years accruing from astute investments, and from his sister’s estate, to help young people contribute to research in the areas he felt most passionately about.

He chose agriculture and horticulture due to his experiences working in Moora in the Wheatbelt before enlisting in the 2/28 Battalion of the Australian Imperial Force in December 1940.

Mr Peacocke also chose medical research because, after falling gravely ill in the war and despite never regaining his good health completely, he remained grateful for all the help he had received from medical staff after the war and during his time in Tasmania, where he moved post-war for its cool climate.

“He often said to me how he ever got to his age he doesn’t know because he should have died years ago,” Mr Elsegood told Business News.

Mr Elsegood said he once asked Mr Peacocke why he didn’t donate to a tertiary institute such as the University of Western Australia, which had a medical school; Mr Peacocke’s response was that UWA had enough money already.

Mr Peacocke told Mr Elsegood he wanted to give to Murdoch University because he and his father had held Sir Walter Murdoch in great respect for his ability to write and speak about complex topics in an easily understandable and engaging way.

Mr Elsegood said Mr Peacocke had left school at age 15 and never claimed to have any aspirations to go on to university himself, or spend his wealth on personal luxuries; instead developing a passion to help other young people further their education.

“This was a man who was a mild-mannered civil servant. He’d worked in the repatriation office in Hobart for many years since returning from WW II and when I looked at the portfolio (he handed me in 1993) I thought this man was a very, very astute investor, because it was worth even in those days well over $1 million,” Mr Elsegood said.

The Alan and Iris Peacocke Research Foundation has provided more than $300,000 in scholarships to several Murdoch University PhD students so far, and the income from Mr Peacocke’s $3 million gift will now be used to continue funding scholarships for years to come.

One recipient, Caroline Nilson, said the scholarship had allowed her to devote three years to full-time study as well as enable her to support an Aboriginal community owned and controlled health promotion program as part of her research.

“The flow-on effect of his support has mobilised and enabled the community to become proactive and self-determined and make changes for improved health and wellbeing,” she said.

Mr Elsegood said he was happy to see his friend’s life and contributions would continue to make a positive impact for years to come.

“I had no idea what to expect when I went to see him the very first time and even today I can’t get over the fact that he has given so much over so long a period,” he said.