Your move: Gillard to business on quotas

Former Prime Minister Julia Gillard has called out Australia, saying it needs to up its gender equity game at the launch event of her new book, hosted by Business News. 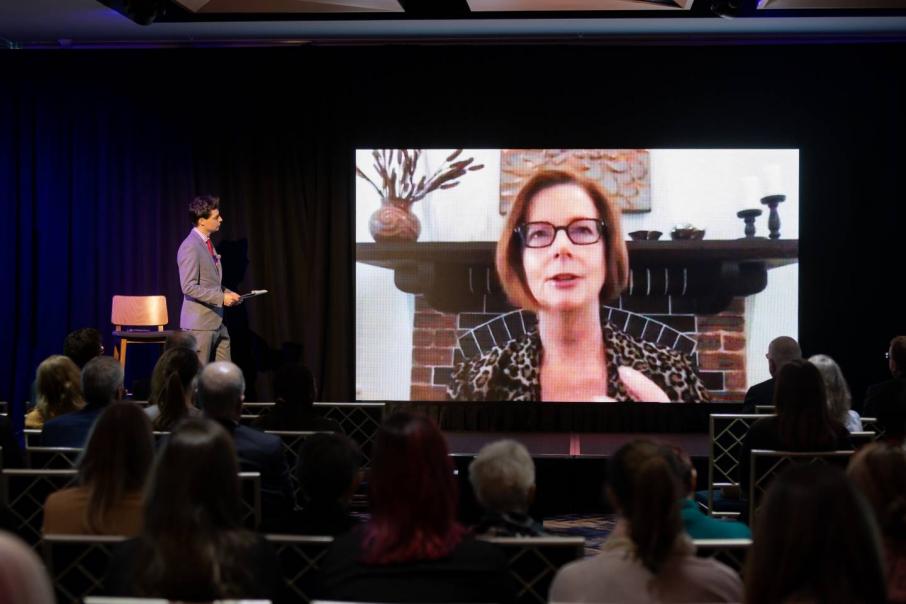 Former Prime Minister Julia Gillard has called out Australia, saying it needs to up its gender equity game at the launch event for her new book, hosted by Business News.

The World Economic Forum’s 2020 Global Gender Index ranked Australia 44 out of 153 countries in the world.

It’s a glaring statistic Ms Gillard did not shy away from when discussing her new book, Women and Leadership: Real Lives, Real Lessons, co-authored by Ngozi Okonjo-Iweala, at the Western Australian launch event earlier today.

“We need to pick up our game,” Ms Gillard told attendees.

“New Zealand comes in at number (6) whereas we’re down in the rankings and have been slipping backwards so we have quite a bit to do on gender equality obviously.”

Ms Gillard said it was time for Australia to roll up its sleeves, discussing a number of initiatives and research highlights from her book that could make a dent on supporting equal opportunity.

Drawing on some of her own experiences during her time in parliament, Ms Gillard also shared some of the insights and stories from women featured in the book, including New Zealand Prime Minister Jacinda Ardern and former United States Secretary of State Hillary Clinton.

“I’ve seen the power of quota targets in the political world, way back when if we looked at the early 1990s in Australia and you looked at the political parties in the federal parliament the conservatives and the Labor Party you would have seen women’s representation down at a level like 13 and 14 per cent on both sides of politics,” she said.

At that time, she said, Labor had adopted an affirmative action target, resulting in a near 50:50 split in 2020.

“It shows you that quotas do make a difference,” she said.

“In the corporate realm I’ve been of the view that businesses should be allowed to sort this out first and if they can sort it out themselves, that’s best; but ultimately government should say if we don’t see enough project or if we see sliding backwards at some point then we are going to step in and regulate.

“I’m not saying we’re at that point yet but I don’t think we should rule out regulating if there’s insufficient progress in corporate Australia.”

Arguments over merit, she said, had been the general criticism against quotas.

“Whenever you talk about targets or quotas people go well what about merit? And that is in my humble opinion the stupidest argument on the planet,” she said.

“If you believe as I do that merit is equally distributed between sexes and you’re looking at any institution, whether its senior management or corporate board or parliament or cabinet and you’re not seeing half men and half women then that must mean there are women of merit who didn’t get to come through because of artificial barriers in their way.

“Quotas and targets are one way of forcing people to clear those barriers aside.”

Ms Gillard said both men and women had equal roles to play in not only championing and supporting more workplace equality, but encouraging more women into leadership roles.

“Men get listened to,” she said.

“The research shows that whether its men in power positions or men who are just colleagues and coworkers, if a man points out sexism people will actually listen to that more and take it more on board than if a woman does.

“A man’s not seen to have any of that conflict of interest; he’s just seen as genuinely raising something that’s troubling him.”

The benefits for men stepping up to the plate and leading the charge against sexism in the workplace, she said, were far-reaching.

“Promotion data from companies show that if a man gets a reputation for being the one that calls out sexism that actually leads to promotional opportunities, because people identify him as a leader and the sort of leader who’s prepared to do things not directly in his self-interest,” she said.

Ms Gillard said it was important to remember that women had also been guilty of perpetuating gender stereotypes and putting other women down.

“For a long time now in business and politics maybe there’s been one two three seats around the big table for women it can be easy for us to get into the mindset that my competitor is the woman there holding the seat – not everybody around the table vying in competition with the other woman,” she said.

“We’ve got to bust out of the mindset that puts us in competition with other women and try and change the rules of the game that women get to come through in fair numbers.

“One of the things that tends to happen when one of these few women (get) on management or corporate board is that male leaders then say, ‘well that gender thing we’ve fixed that’ and they set down the tools on the rest of it.

“And it is that, that is stopping more women coming through.”

The event drew a crowd of more than 250 attendees, including students from host sponsor Guildford Grammar School.

Secure your tickets to the next Business News event, Politics & Policy breakfast with Senator Cormann on Friday August 7 here.