Woodland a man for the times 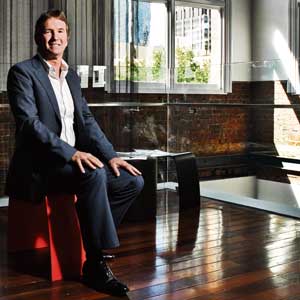 IMAGINE Perth with twice the residential population it has now, or a major university campus in the middle of the city, or a pedestrian bridge linking Kings Park to the city via Parliament House in the form of a landscaped roof over the freeway.

These grand visions of Cox Howlett and Bailey Woodland director, Steve Woodland, provide an insight into how the new government architect would like the city to look in 10 years' time.

In a role that reports directly to the treasurer and premier, Mr Woodland will advise the government on how to improve the design of public buildings and spaces.

Mr Woodland brings not only his 30-plus years of experience to the role, during which time he has won countless awards and worked on iconic Western Australian buildings - including Central Park, Fraser's Restaurant Kings Park and the Fremantle Maritime Museum - he also brings a passion for WA and a desire to deliver high-quality design.

"It's about the standard of all the government works, that every capital work is done on the basis that we get the best possible design brought into those things. That they work properly, respond to human needs properly, that they respond to their context and that they are energy responsive," Mr Woodland said.

"That's the long-term view I believe the government should and will start taking.

"I don't think we can afford any more to just churn out buildings without looking at their impact down the track. If we don't think about them properly and don't do them well, we finish up with buildings that perform poorly or consume too much energy or don't respond to change."

After graduating from Curtin University in the late 1970s, Mr Woodland spent some time working in London before coming back to WA.

Still with a toe in international waters, Mr Woodland and his team collaborate on projects located both interstate and overseas.

Globally, Cox Howlett and Bailey Woodland has maintained a particular focus on the Middle East, recently completing work on a 65-storey tower in Dubai, and is now working on a full university campus in the United Arab Emirates.

"In terms of movement of ideas and material, it's pretty easy these days,'' he said.

''That's just a part of the industry. I think the ability to be multi-geographical is important. It also makes you appreciate your own state and place a little better. WA is an extraordinary place in terms of landscape and setting - it's one of the most extraordinary landscapes in the world, in my view.

''And the city sits in one of the most remarkable settings you could ever get for a city."

As for key priorities in his new role, Mr Woodland wants to help revitalise the Perth Cultural Centre in Northbridge and ensure the foreshore is better utilised.

"I think [the cultural centre] should be a premier space that all Western Australians are proud of and happy to come to, not just a desolate sea of paving. It should be the sort of place people who don't necessarily have any specific business in the city just want to come and be a part of," Mr Woodland said.

"And similarly the foreshore. Those two are ultimately the two key democratic spaces of the city as I see it, the places that all Western Australians should be proud of and want to come to and be proud to send visitors to."

But in a time of major government belt-tightening, Mr Woodland hopes the government will take a broader view and consider the importance of cultural facilities.

"They are critical ingredients, and while I accept the immediacy of the need for health and educational ... I don't think we should be doing that at the expense of keeping pace with our cultural support," told WA Business News.

"I think the health of a society is reflected in the quality and quantity of its cultural facilities. Not just in the high-end formal sense, but also the ability to access a whole range of culture.

"We are as a state an incredibly creative place in terms of music, visual arts, performance, written work; we've got people who are internationally famous.

"It's actually quite a creative culture we have and I don't think we celebrate it enough."

One of the things that really influences me is the Western Australian landscape. I love the whole coastal ethos, and the writings in particular of Tim Winton I find incredibly resonant in that regard. I think our whole character as Western Australians has been very much influenced by it. And I love being in the northern part of the state as a landscape. That, and the quality of light that introduces to the colouration of things, I find enormously inspirational.

Which of your projects are you most proud of?

I still have a great fondness for the [Fremantle] Maritime Museum, not just as a building but I enjoy that whole relationship with the water and the fact that is the place of our first landing, and the relationship back to the harbour itself.

What would you ultimately like to achieve during your tenure as government architect?

I would really like the higher order level (of government) to have a policy of pursuing quality design built into the way it goes about its work. I would like to see government taking strong whole-of-life view on buildings in terms of cost, energy and people. And in terms of the city, I would like to see it re-engage with its cultural centre and the river. If I could get somewhere on those three I'd be happy.