The drives across Australia’s south-east, take in spectacular coastal and mountain scenery, making it very hard to select the best. 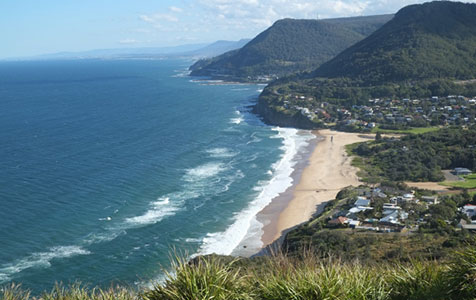 There are many wonderful drives across Australia’s south-east, taking in spectacular coastal and mountain scenery, making it very hard to select the best.

The contenders include the coastal highway that runs south of Sydney through Stanwell Park. Another beautiful drive is the Alpine Way through Jindabyne to the snow fields at Thredbo.

The coastline at Wilsons Promontory, south-east of Melbourne, is also impressive.

But none could match Victoria’s Great Ocean Road, which winds around rugged cliffs, past stunning surf beaches, and through lush forests to the truly impressive Twelve Apostles – even if there are only 11 still standing.

Taking each of these in turn, it’s worth noting that drivers who head due south from Sydney have a surprisingly easy exit from the big city.

Heading south-west to the Hume Highway is much tougher going.

We left Bondi beach mid-afternoon and had a very smooth run along the toll road that goes past the airport and south to Botany.

Before long, we had crossed the Georges River, driven past Sylvania Waters – who remembers that TV show? – and were driving past the Royal National Park.

After a short and very pretty drive through the bush, we emerged at the high cliffs overlooking the coast at Stanwell Park.

This is a popular launching spot for hang gliders, and it’s easy to see why.

The high cliffs also offer spectacular views along the coast, which is dotted with beautiful surf beaches, lush forest and steep hills.

It’s remarkable to think that places like Stanwell Park, Coalcliff, Scarborough and Coledale have retained much of their small-town atmosphere, even though they are situated between Sydney and Wollongong and the busy Princes Highway.

But the effort is worth it, because the coastline further south is also beautiful, particularly around Kiama.

We didn’t go as far south as Ulladulla, Narooma and Eden, but from past experience, I know the coastal drive is very impressive.

Instead, we headed inland to Canberra, which I’ve covered elsewhere, before driving south to the Snowy Mountains.

It was an unusually warm day when we drove south – there was not a cloud in the sky, nor was there any wind. It was T-shirts and shorts all the way to Thredbo, where I was still wearing just a T-shirt when we arrived at 5pm.

The drive to the Snowy Mountains is beautiful at any time of year. It leads through some charming little hamlets to Cooma, before going on to the holiday town of Jindabyne.

We had lunch overlooking the lake at Jindabyne, played a round of Frisbee golf, and even watched a couple of crazy people having a swim. It was sunny out of the water, but not that warm.

Then it was an easy drive to Thredbo, where we spent three enjoyable days skiing.

Mid-September is not prime skiing season but we enjoyed good conditions. It’s been a good season at the Australian fields and consequently there was a very solid snow base.

The weather varied from bright sunshine to a burst of hail on day three, but that’s all part of the experience when you’re out on the slopes.

After Thredbo, we decided to take an untried route to Melbourne. We headed south-east to Bombala, which then leads on to Lakes Entrance.

It was a nice enough drive though rolling farm lands and mountainous timber country, but not something to write home about.

It was a bit strange driving along Victoria’s southern coast, passing through holiday towns and beaches on Bass Strait.

They were all nice enough, but just not the kind of place I’d ever contemplate a beach holiday.

We headed to Wilsons Promontory, a national park that has an abundance of native fauna – wombats, emus, kangaroos and wallabies can all be seen as you drive through the park.

The park has lots of spectacular coastal scenery, but be prepared to go hiking if you want to enjoy the area to its fullest. The roads inside the park are very limited.

If you want to stay at the main camping area at Tidal River, also be prepared for very expensive camping fees.

The park charges $53.50 per night for unpowered camping sites. Having spent the past three months travelling around Australia staying at many national parks and private camp sites, I have never encountered a camping fee that high. The norm is $15 or $20 per night. Even El Questro – a private business operating in the high-cost Kimberley – only charges $40 per night.

I was also disappointed by the hike up Mt Oberon, which is one of the main attractions at Wilsons Promontory.

I was looking forward to walking along a bush trail that meandered through the forest. Instead we had to walk up a dirt roadway.

The width, steady gradient and long straight stretches are no doubt very functional for vehicles that use the road, but served to make it a very dull ‘bushwalking’ experience.

When we finally reached the summit, I was dismayed to see several telco towers and associated industrial equipment. It was certainly not what I expected to find in a national park. Putting that aside, the view in the other direction was very impressive.

A popular nearby attraction is Philip Island, best known for its nightly fairy penguin parade.

This attracts hundreds of tourists every night, which means most people don’t actually get close to the penguins.

They have actually built a type of grandstand to accommodate the crowds. It’s not my idea of fun, so we skipped that one.

After a few days in Melbourne, which I will try to cover elsewhere, we headed south to Torquay and the famous Bells Beach.

It’s impressive to stand at the top of the cliffs and look down at the surfers, even on a day when the swell was relatively small.

Then we headed west along the Great Ocean Road, which winds past beautiful little towns with sheltered beaches, interspersed with cliffs and forest.

The section between Lorne and Apollo Bay is particularly attractive; it’s also quite tiring navigating the hilly, windy roads, but that’s the price you pay.

We found a gorgeous camp spot near Nye River, courtesy of the ‘Wikicamps’ app  – this is one of the most useful apps invented. It has a wealth of information and comments about camp sites across Australia and is highly recommended for all travellers.

The camp site was about one kilometre off the main road, up in the forest, surrounded by tall trees, with the only sound being the occasional possum in the distance. It was bliss.

The Great Ocean Road heads inland across the Otway Range, past lush dairy farms, before coming out near Princetown and The Twelve Apostles – a series of free-standing limestone stacks just off the coast.

This section of coast has lots of other attractions, with sheer cliffs and narrow canyons, and is definitely worth seeing.

From there we drove inland to The Grampians national park, which was also impressive.

The Grampians reminded me of The Porongorups and the Stirling Ranges near Albany – spectacular rocky peaks that rise abruptly from the surrounding farms.

It’s a great spot for bushwalking, rock climbing and camping, and caters for all tastes – those who want an easy stroll from the car, and those looking for a challenge.

We spent one day there, and could easily have stayed for more.

But we are a bit like a horse that has turned for home after a long ride – they get the smell of home in their nostrils and are keen to keep on going.