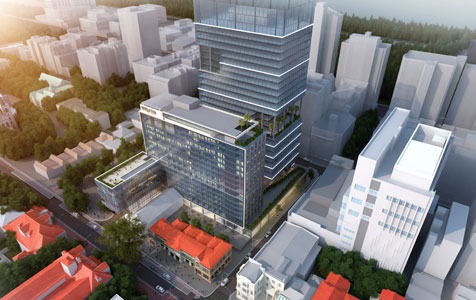 An artist's impression of the completed development.

BGC’s Heritage Precinct project will comprise a 22-story office development with retail and food and beverage facilities as well as a five-star luxury hotel, and will be built on the first parcel of land released under the state government’s hotel development incentive at 480 Hay Street.

The office tower will add 34,500 square metres of office space to the CBD, while the Westin Perth will provide a further 350 rooms.

Construction is expected to be complete by 2017.

“The Starwood Group has more than 1,100 hotels and resorts in nearly 100 countries, including the premium Westin, Sheraton, St Regis and W Hotel chains, and is one of the largest and most successful hotel companies in the world,” Ms Harvey said.

The development is the third major hotel development mooted for Perth, with Crown moving forward with a $568 million luxury resort project at Burswood, while high-end international chain Ritz Carlton is believed to have partnered with Far East Consortium, which is understood to be the front-runner for a hotel and apartment site at Elizabeth Quay.

Brookfield Multiplex was announced in October as Crown’s construction partner for the Crown Towers project.

“This is good state policy, well delivered, starting to get results,” he said.

Ms Harvey said Tourism WA would continue to monitor the level of hotel supply in the city, to ensure development incentives were managed appropriately.

Managing director Julian Ambrose said the development would be a flagship project for BGC.

“This project is the largest and one of the most significant ever undertaken by BGC,” Mr Ambrose said.

“It’s also one of the most exciting because it represents an opportunity to help redefine a prime city location.

“The combination of retail, commercial, entertainment and accommodation options this site will provide is indicative of the changing nature of the CBD and is something BGC is extremely proud to be associated with.”