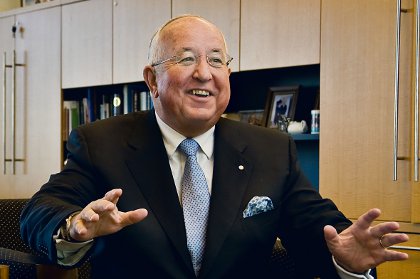 ALL THE WAY: From ballet to boards, Sam Walsh is a strong supporter of the arts. Photo: Grant Currall

SAM Walsh’s eyes light up when he talks about the arts.

As the head of Rio Tinto Iron Ore, a division that accounts for 70 per cent of the company’s earnings, his business acumen over many years is well documented. More recently, however, it’s his enthusiasm for cultural pursuits that is gaining him plaudits.

He speaks with enthusiasm of recently seeing Jandamarra – a stage play currently touring the Kimberley – in Broome, of Tim Winton’s play Rising Tide, and his anticipation regarding the upcoming film about the Pilbara, Red Dog.

Mr Walsh’s involvement in the arts isn’t limited to being a member of the audience; he is chair of the Black Swan State Theatre Company and played a large part in helping to establish the Chamber of Arts and Culture WA.

When it comes to separating Mr Walsh’s personal involvement in the arts from his involvement in his capacity at the head of Rio, the lines are somewhat blurry.

“Certainly I bring the imprimatur and influence that Rio Tinto has as a large player and large business in town with obviously large expenditures, but also employment and community involvement and what have you.

“I suspect that if I step back from it, Sam Walsh is Rio Tinto and Rio Tinto is Sam Walsh, it is a natural fit and it is very hard for me to separate myself from Rio Tinto.”

Mr Walsh said the Chamber of Arts and Culture (CACWA) was established after he had joined the board of Black Swan and became aware of some of the issues for arts organisations.

“Very naively I thought that the arts carried its own weight. If I paid for a seat at the theatre or the opera, the orchestra, the ballet or whatever, then that was covering the cost, that it was self financing,” he said.

“What I didn’t understand was that at Black Swan, when you pay for a seat, that is covering 30 per cent of the cost.”

With 50 per cent of funding coming from government and the remaining 20 per cent from philanthropic and corporate support, Mr Walsh said CACWA was established to provide arts organisations with better access to government.

“Arts organisations are really good in the creative area, they are quite good in administration and governance, but in terms of the broader picture in terms of lobbying government, lobbying the department, looking for support, it sort of drops away,” he said.

“It wasn’t just Black Swan that had that issue; as I looked across a range of performing arts groups and other arts organisations across the metropolitan area and the regions, I noticed there was the same thing.”

After the latest state and federal budgets, CACWA lobbied the state government and the Commonwealth for more funding.

“The lobbying after the budget, state and federal, really relates to whether the arts is getting its fair share and whether the government truly understands the value add associated with the arts,” Mr Walsh said.

He said funding in the arts was a sensitive issue and a slight change in the process could tip the scales, for better or worse.

“The funding is sensitive, it doesn’t take a big change in funding to rock the boat and lead to either a reduction in the number of shows or the quality of the shows,” Mr Walsh told WA Business News.

‘‘That is why the chamber was put in the position to represent 40 arts groups across WA, so that the government understood the importance of the arts and the fact that artists and people who attend the arts are all voters.

“It is important for the creative side of the arts to move from good exhibitions or good theatre to brilliant exhibitions and brilliant performances. It is a self-evolving process,” he said of the development of arts programs.