Volunteers the stars at Burswood

CONTROLLING all the variables and minimising risk is a big part of any business's strategy, but there's not much you can do when one of those risk factors is the weather. 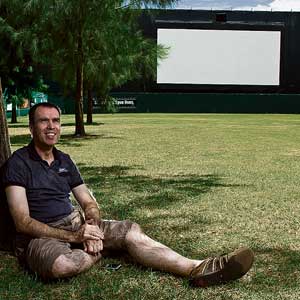 CONTROLLING all the variables and minimising risk is a big part of any business's strategy, but there's not much you can do when one of those risk factors is the weather.

It's a reality faced by all those associated with the outdoor entertainment industry, according to Movies by Burswood founder Ken Gibbons.

"It wasn't great when we opened first night [in 2002] and got rained out. We weren't even able to screen," Mr Gibbons said.

If that was an inauspicious beginning, season's end was worse.

Mr Gibbons and a sponsor paid for the loss out of their own pockets. For the next four years, he financed up front with his credit card and waited for the income stream to come through.

Far from dissuade Mr Gibbons, however, those experiences made him more determined.

"I went in with bright hope that it would make a fortune. It was a strong learning curve but I was determined I would make a success of it. I think most successful business ventures are based on determination, sacrifice and by doing it hard and learning from mistakes," he said.

Always intended as a fundraiser, Movies by Burswood is now a registered non-profit organisation run entirely by volunteers. It supports entities including the Riding for the Disabled Association (RDA), Starlight Foundation, Ronald McDonald House and Youth Focus.

The idea began at a dinner party between university friends, in what Mr Gibbons calls "a classic case of put up or shut up".

"I was complaining there weren't any family friendly outdoor theatres in Perth, and my friends basically told me to cop it," he said.

A lover of movies since childhood, Mr Gibbons approached the Burswood Park Board and requested free use of the parkland with supplied power, water, rubbish and toilet facilities.

"I was naïve, but they agreed. It was pretty awesome on their part to take the punches with no real guarantee on our side that we could carry it off. But they did and the rest is history," Mr Gibbons said.

It is run on a commercial basis where organisers make as much profit as possible in order to donate.

Like any charity, Movies by Burswood is subject to regular auditing, but it also has a business plan and senior management. Nobody but the occasional outsourced contractor is paid.

With a lifetime of small business experience behind him, Mr Gibbons said it was much harder to run a voluntary organisation.

"You have to be careful with your staff because they are there voluntarily. You've got to treat them with a lot of respect because they're donating their time and working harder."

And the level of commitment required by volunteers to prove they are serious is far greater.

Jenny Ward, who works one night a week as a general volunteer and one as an RDA volunteer, said the promotional value of the cinema for the groups it supported was priceless.

"For us, a small organisation, it brings publicity and gets us out there, gets people asking questions about who we are. Most importantly, it gives us those finances that are so hard to get," she said.