Charter vehicle company Uber is consciously breaking Western Australian laws in what it has described as an act of ‘civil disobedience’. 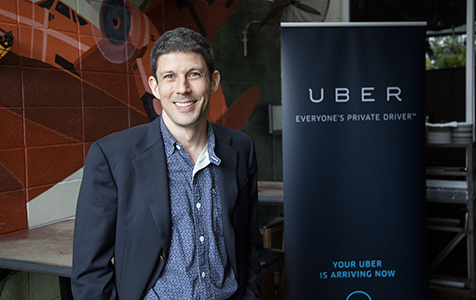 Uber's Mike Brown concedes the company is breaking the law.

Charter vehicle company Uber is consciously breaking Western Australian laws in what it has described as an act of ‘civil disobedience’.

The San Francisco-founded company utilises smartphone technology which enables users to hail a driver through its smartphone application.

A key selling point is that no money is exchanged as the user pays through stored credit card details.

Its high-end service - UberBlack - has been available in Perth for about two months and offers a service akin to that of professional and private charter vehicle services.

However the company is opening flouting state regulation in offering such a service by accepting fares less than $60.

All charter service operators in WA are subject to regulation which limits them to only taking fares above $60.

“We think [that law] is bad for riders and bad for drivers, so we have not set our prices with a $60 minimum,” he said.

“We are not respecting that law, call it civil disobedience.”

Mr Brown said, to his knowledge, no driver had been fined since Uber entered the Perth market in May.

He said the $60 minimum was bad for its drivers because it ruled out significant business.

The regulation is intended to protect the state’s taxi industry, which Mr Brown admitted Uber was seeking to disrupt.

“Uber is completely opposed to monopoly and restrictions that aren’t in the support of public safety,” Mr Brown said.

“The story is that ‘Uber wants to hurt taxi drivers’ … that could not be farther from the truth.

“We want to eliminate graft and corruption and monopoly so that hard working drivers make as much money as possible.”

Mr Brown said that taxi drivers could make much more money by becoming an Uber driver because there were fewer parties trying to take a cut from the fare.

Simultaneously, fares would be less because of the reduced costs, he said.

Uber’s low cost service UberX raised concerns when it launched on the east coast. That service allows any motorist to receive money for transporting Uber users.

The New South Wales government has issued fines of $2,500 to people providing the services on the basis that they did not have appropriate licences or authorisation.

Mr Brown said he believed Uber would also be breaking the law if it decided to launch the UberX service in Perth, but had confidence regulation would change once it proved the value of its service.

“It’s not to say that we don’t have deep respect for regulation and the people who create regulation - we do. However, the regulation that exists … is that no-one imagined this kind of system,” Mr Brown said.

He said that WA’s policy makers had already shown interest and support for the Uber service, and he was confident regulation would change in time.

Mr Brown said Mr Nalder’s concerns would be allayed, along with others who were cautious, once they understood and experienced the service.