Tyranna Resources has picked up a couple of interesting nickel tenements in WA in addition to a NSW nickel-cobalt laterite play. The company will acquire unlisted, Clean Power Resources', prime nickel ground across two states. The WA projects are located in good nickel country with a total prospective strike length of over 30km across structures that link directly to St George Mining’s successful nickel play at Mt Alexander. 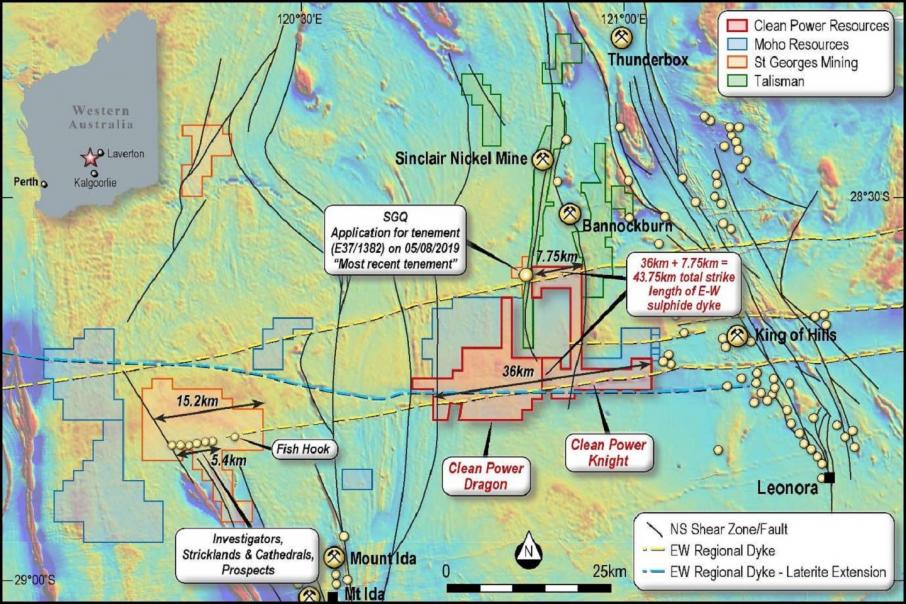 ASX-listed Tyranna Resources has picked up a couple of exciting new nickel tenements in WA, in addition to a NSW nickel-cobalt laterite play. The company will acquire 100% of private company, Clean Power Resources WA and NSW projects in exchange for scrip.

Tyranna’s new flagship projects, Dragon and Knight, are located in prime WA nickel country with a total prospective strike length of over 30km across structures that link directly to St George Mining’s successful nickel play at next door at Mt Alexander.

Tyranna’s Non-Executive Director Joe Graziano said: "our initial focus will be exploring the 36km strike that traverses the Dragon and Knight projects for nickel sulphide mineralisation as this delivers significant exploration upside.”

The company says that St George’s prospective mineralised structures and geological units extend onto its ground, which appears to be confirmed by observations in geophysical magnetic surveys.

St George has been drilling furiously across its ground and it has buckets of impressive massive, semi-massive and disseminated nickel sulphide intercepts on the record already.

The deal also includes an exploration play in NSW known as the Pacific Express project, which is prospective for nickel-cobalt laterite-hosted deposits. This project also comes with a decent historical data set to work with.

Tyranna’s latest acquisitions are timely as nickel supplies dwindle across the globe with prices now most likely set to head north.

The investment dollars are pouring into the region around the WA projects too, with Talisman Mining’s recent agreement to sell its Sinclair mine for $10 million with a 2% net smelter royalty payable to the buyer, mining heavy-weight, Saracen Minerals.

The final transaction for Tyranna is subject to further due diligence and if successful, the Perth-based company is expected to get its boots on the ground in the near future. Tyranna has committed to an accelerated exploration program including mapping, geochemical sampling and geophysical surveys to aid the targeting of its maiden drilling campaign.

The company will issue just over 35 million shares to the project vendors, which equates to approximately 3.16% of its issued capital. Upon reaching performance milestones, it will issue up to a further 123 million shares as and an additional $1 million worth of shares or cash, at Tyranna’s discretion.

With a swathe of impressive nickel intercepts rolling in from St George at the neighbouring Mt Alexander project and a bunch of persuasive exploration targets at Dragon and Knight, it shouldn’t be too hard for Tyranna to add some value to its latest pick up.