Former Communications Minister Malcolm Turnbull said Australia needed a leader who respected the people's intelligence and would advocate for economic change, as he announced a leadership challenge against Prime Minister Tony Abbott. 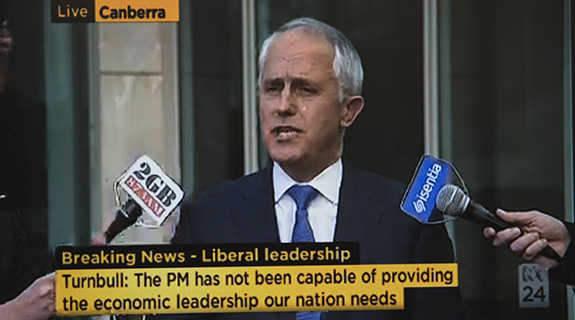 A balllot will be held tonight on the Liberal Party's leadership, after former Communications Minister Malcolm Turnbull lodged a challenge against Prime Minister Tony Abbott.

After stepping down from his ministerial portfolio, Mr Turnbull said Australia needed a leader who respected the people's intelligence and would advocate for economic change.

Mr Turnbull held a press conference at 4pm EST after stepping down from his ministerial portfolio.

The challenge follows an attempted leadership spill in February, when a group of backbenchers, led by MPs from Western Australia, agitated for a new leader.

This time, it has been widely reported deputy leader Julie Bishop is supporting the challenge.

The move follows consistent polling showing Labor ahead of the coalition on a two-party preferred basis.

Mr Turnbull said he had consulted widely before making the decision.

“A few hours ago I met with the prime minister to advise him I’d be challenging for the leadership of the Liberal Party,” Mr Turnbull said.

“This course of action has been urged upon me by many people over a long period of time.”

His pitch was focused on economic leadership and rebuilding business confidence.

“A style of leadership that respects the people’s intelligence, that explains these complex issues, and then sets out the course of action we believe we should take," Mr Turnbull said.

“It is clear that people have made up their mind about Mr Abbott’s leadership.

“Our party, the Liberal Party has the right values … of free enterprise, of entrepreneurship.

“What we’ve not succeeded in doing is translating those values into the policies.

"We're living as Australians in the most exciting time."

New leadership would also mean a greater reliance on cabinet and an end to policy on the run and captain's calls, Mr Turnbull said.

“Dealing with this issue the week before the (Canning) by-election is far from ideal," he said.

“The alternative if we were to wait, is that this issue, these problems will roll on and on and on."

Mr Turnbull fired a shot over the bow of Opposition Leader Bill Shorten, too, arguing that his position on the China-Australia free trade agreement made him unfit to be Prime Minister.

It means that the Liberal Party leadership has almost come full circle from 2009, when Mr Abbott defeated Mr Turnbull as leader of the party by just one vote.

At that time, Mr Abbott had a similar pitch to the party room, opposing Mr Turnbull's own captain's call on the emissions trading scheme.

Today, Mr Abbott said the country was "better than this".

There will be a Party Room ballot for both the leadership and deputy leadership positions later this evening.

"I will be a candidate and I expect to win," he said.

"I have been heartened by the messages of support flooding into Liberal MPs' offices this evening saying most emphatically, "We are not the Labor Party."

"This country needs strong and stable Government and that means avoiding, at all costs, Labor's revolving-door Prime Ministership.

"Since coming to Government, our team has stopped the boats, improved the Budget, cut taxes and increased jobs.

"We have laid the foundation for a better deal for families and for small business.

"You can trust me to deliver a stronger economy and a safer community."