Troy Resources has weathered the challenges of Guyana’s wet season, producing impressive drilling results while maintaining operations at its Karouni gold project in South America. The standout diamond drilling results from underneath the existing Smarts open pit include a 32-metre zone grading 4.29 grams per tonne gold from 168m down hole. At the Goldstar prospect, near surface RC results also include 17m grading 2.21g/t gold from just 3m. 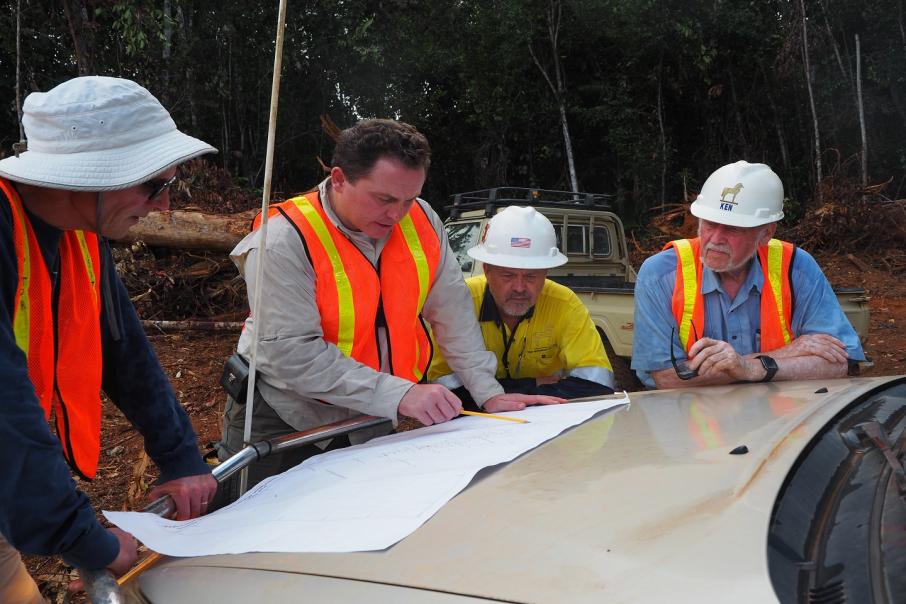 Troy Resources has weathered the challenges of Guyana’s wet season, producing impressive drilling results while maintaining operations at its Karouni gold project in South America. The standout diamond drilling results from underneath the existing Smarts open pit include a 32-metre zone grading 4.29 grams per tonne gold from 168m down hole. At the Goldstar prospect, near surface RC results also include a 17m intersection grading 2.21g/t gold from just 3m.

Another intercept that caught the eye from Smarts included 11m grading 12.36g/t from 251m down hole that also includes a 3m zone running at nearly an ounce per tonne.

Open pit mining at Smarts kicked off in April 2015 and Troy had initially planned to take the mine underground, with an impressive 3 million tonne resource grading 3g/t for around 290,000 ounces defined within the potential underground mining scenario at the time.

Appraisal of the Smarts deposit, during 2013 and 2014, highlighted the geology was far more complex than the models had indicated. In-pit grade control drilling in 2016 also identified north-south trending, high grade gold zones, not previously recognised from the resource drilling.

In a bold move, Troy removed the Smarts underground resource from its production profile in or around 2019, putting the brakes on to get a better understanding of the geology and mineralising structures.

Troy’s patience appears to have been rewarded, with the company now possessing a far more accurate representation of the gold mineralisation, geology, and structures at the Smarts deposit.

The company said that historic drilling into parts of Smarts may have only revealed part of a bigger picture, with previous drilling oriented sub-parallel to the mineralisation - meaning that holes were drilled “down” into the gold zones.

Geologists at Troy have identified the structures host to gold mineralisation at Smarts are oriented near vertically and in some places, are steeply southwest dipping. Smarts is hosted by a nearly 3km long shear zone and up to 60m wide in places.

With the new drill holes now intersecting the Smarts deposit at a more optimal perpendicular angle, the true width and nature of mineralisation has provided Troy with some impressive results. Other notable hits include an 8m zone grading 15.50g/t gold from 290m, including 3m grading over an ounce per tonne gold.

Troy is now planning to infill drill the existing mineral resource and update the model towards the end of August. The updated model will likely enable the company to revisit its underground mine plan for Smarts.

The diamond rig has completed five of eight planned holes at Smarts with the results returned to date all from one hole.

Elsewhere, an RC drilling program at the Goldstar prospect is aiming to update the existing resource of 620,000 tonnes grading 1.3g/t for 25,500 ounces of gold.

Assays for seven of 35 separate holes at Goldstar have been returned to date with other notable results of 6m grading 10g/t gold from 66m, including a 3m interval grading 19.58g/t gold.

The Goldstar deposit, also part of Troy’s Karouni project, is potentially accessible via the existing haul road from Troy’s Ohio Creek mine to the Karouni mill. The company said early development of Goldstar is possible once the drilling is completed and resource updated. This will allow the company to look at the deposit’s economics by constructing a mine reserve.

Despite the dual challenges of COVID-19 and South America’s rainy season, Troy looks set to crank up operations with preliminary production for the June Quarter, including nearly 7,300 ounces of gold recovered.

Troy’s Karouni project is located on the North Atlantic seaboard of South America, with very little modern exploration conducted in the area before 2011. Much of the ground was, and still is, held by small family gold mining syndicates locally known as “Pork Knockers” since the 1960s.