A new bar at Perth’s QV1 is aiming to make a big splash in Perth’s west end. 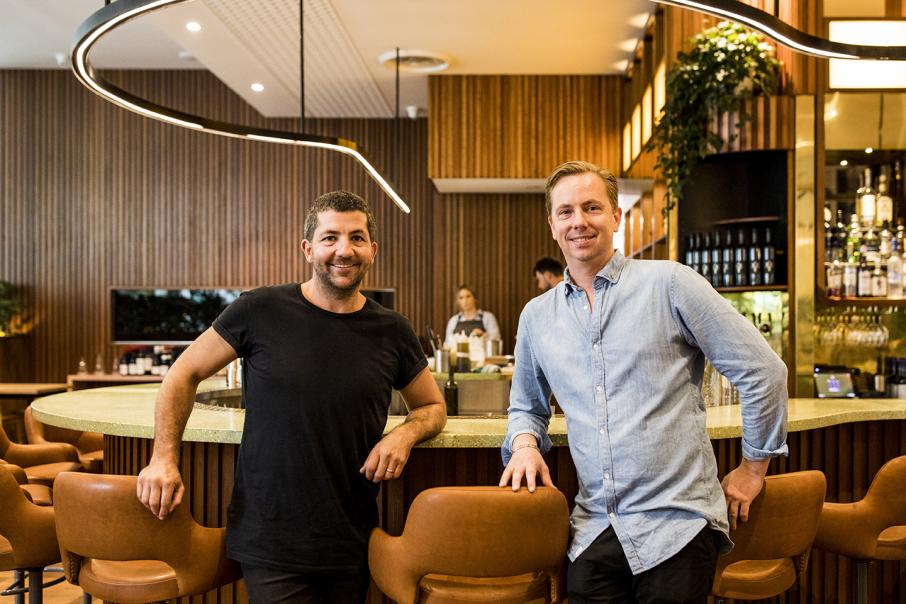 Paul Aron and chef Michael Forde teamed up about seven years ago, and together they have livened up the Mount Lawley strip with the openings of El Publico bar, Ace Pizza, and Mary Street Bakery (in Highgate).

Mr Aron said he loved the space at QV1 and couldn’t pass up the opportunity to create something interesting for an area he described as an under-catered part of Perth.

“We’ve been working on this place on and off for about four years, that’s when the site came up,” Mr Aron told Business News.

“The landlords approached us when Bar One closed; we came in and had a look.

We loved Bar One before, it was an amazing venue and had a great vibe, and thought ‘what can we do here, what sort of style would we want, and does this end of the city need something like this’?

“And we really thought it did, so we grabbed hold of the lease.”

Mr Aron said it would have been a mistake to walk away from a venue with a tavern licence for 260 people.

“The landlord did a lot of renovation work in here so we held off for a while; we didn’t think the market was really ready and we didn’t want to open in a soft market with all this work going on,” he said.

“A lot of people I know say the last six months have been the best they’ve had in the last few years, so we thought ‘now’s the time’.”

With development of the forecourt at QV1 near completion, Mr Aron said several retailers would be opening soon, while Mary Street Bakery’s coffee container would begin moving into one of the permanent spaces in about a month.

Messrs Aron and Forde have previously built up and sold a number of venues between them, including El Publico, Ace Pizza, The Greenhouse, Cantina 663, and Harvest Restaurant.

And while some of these have closed since changing hands, Mary Street Bakery (which they still own) has grown to operate across venues in West Leederville, Allendale Square and QV1, plus a coffee roaster at Hibernian Place.

Mr Aron said that, following the launch of Tiny’s late last month, he hoped to settle in for the long term and build up a community at the venue.

In terms of food, he said the original plan was to run with something Middle Eastern, but as times changed he and Mr Forde settled on contemporary cuisine with wood-fired meats and vegetables picked from the QV1 garden upstairs.

Heading the team in the kitchen is former Rockpool Bar and Grill chef Jacob D’Vauz, who was once the touring chef for Paul McCartney, while former Mrs Brown Bar, Mechanics Institute and Dominion League group manager Brett Robinson has come on as Tiny’s venue manager.

“We want (Tiny’s) to be a venue that can drag people back to the west end of the city,” Mr Robinson said.

“It’s been underserviced for a while and we think this is a great place to bring people into the city to dine and drink, whether it be a weeknight on the way to a show or as a destination on the weekend.”

With a green terrazzo bar with brass fittings serving house-made cocktails, local beer on tap and a fit-out using the original wood panels of Bar One, Mr Robinson said Tiny’s was designed as a lively meeting point, while its liquor store downstairs would have a moodier feel.

Opening soon, Tiny’s Liquor Emporium will feature locally and international sourced whiskeys, wines and beers that can be consumed by the glass as part of a limited tasting list, while decanters, cocktail kits and other alcohol-specific goods will also be available.

“It’s a bit unique, especially the way we want it to play out,” Mr Robinson said.

“There’ll be daily tastings, we’ll have a leg of ham in there so you can have a walk around and a bite to eat.

“That’ll extend to a wine concierge service to people in the building and people in the city; and as well as that we’ll have an online arm and wine club.”