“The Women Should Have a Voice”: Edith Cowan’s legacy of social justice in Western Australia 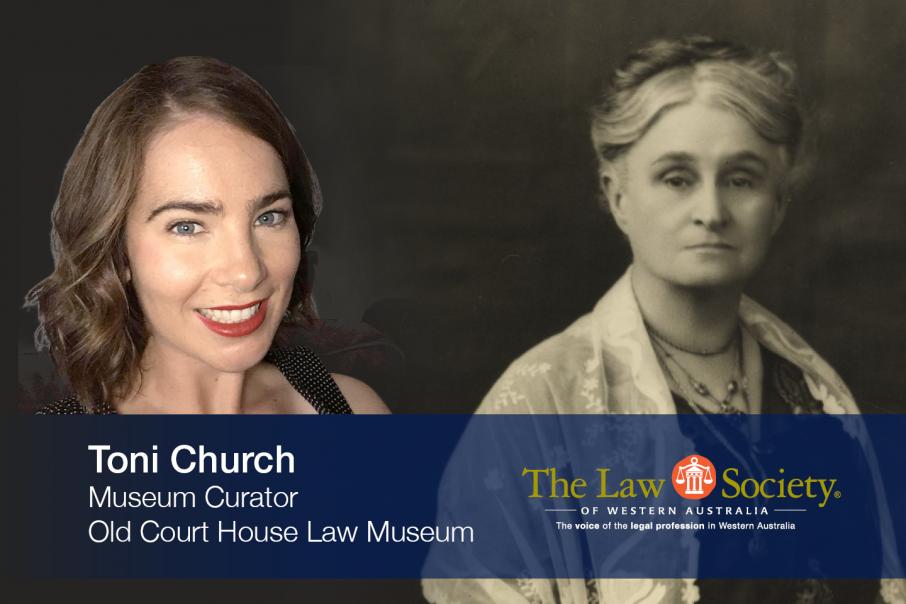 On 28 July 2021, it will be 100 years since Edith Cowan delivered her inaugural speech to Western Australian Parliament – the first woman in Australia to do so. Cowan is well-recognised as a trailblazing politician, but her work and influence stretched far beyond the years of her parliamentary service. Marking the centenary of her admission to Parliament, a new exhibition has been launched at the Old Court House Law Museum to highlight the alternative narrative of Cowan’s legacy of social justice. “The Women Should Have a Voice”: Edith Cowan’s legacy of social justice in Western Australia commemorates Cowan’s enduring influence in her community, displaying objects loaned by the organisations she established and supported that are still operating in Western Australia today. The contribution by these modern organisations was key to communicating to visitors the broad reach of Cowan’s interests and influence on modern life.

Edith Dircksey Brown was born on 2 August 1861 at Glengarry, her family’s homestead on a large pastoral station near Geraldton, Western Australia. The descendant of prominent colonial Swan River families, Brown and Wittenoom, Edith was raised in a well-regarded family and was sent to boarding school in Perth at the age of seven, after her mother died in childbirth.

In 1876, Edith experienced the life-altering personal tragedy of her father’s hanging after he was found guilty of the murder of Mary Ann Tindall, his wife and Edith’s stepmother, at the culmination of what was later proven to be years of shocking and sustained domestic violence by Brown. The emotional effect of such violence and the ensuing fight for justice in her early life had a profound influence on Edith Cowan’s later advocacy work.

Edith’s marriage to James Cowan, a Registrar and Master of the Supreme Court of Western Australia (and the brother of her boarding school headmistresses) on 12 November 1879, appears to have been a very modern relationship. By 1891 they had five children, but both parents worked long hours outside the home. James had been appointed Perth Police Magistrate, while Edith took an increasingly public role engaging with social justice causes, establishing various societies and organisations to advocate for change in the wider community.

As displayed in the new exhibition at the Old Court House Law Museum, among her many commitments and broad range of causes, Edith Cowan worked to provide housing and maternal support to unmarried mothers; established the RSPCA in Western Australia; worked as a Magistrate of the Children’s Court of Western Australia after advocating for many years as part of the Children’s Protection Society; significantly contributed to the establishment and Advisory Board of King Edward Memorial Hospital for Women; and was a foundation member of the Royal Western Australian Historical Society in the lead up to the state’s centenary celebrations in 1929.

Of course, Cowan is most prominently remembered as the first woman elected to a Parliament in Australia. She served as a Member of the Legislative Assembly (MLA) for West Perth, representing the Nationalist Party in Western Australian Parliament from 1921-24. The election in 1921 was the first in which women were eligible to serve as parliamentarians in Western Australia. Notably, Cowan was one of four women to run for state Parliament in 1921 but only the second to become a female parliamentarian in the British Empire.

During her election campaign and parliamentary career, Cowan received public admonishment from newspapers and commentators about the abandonment of her wifely duties at home, as well as from her political colleagues who frequently interrupted her addresses to Parliament. In her inaugural speech, Cowan emphasised the necessity which existed for women to support one another and serve in positions of power in Western Australia, stating that “the women should have a voice”. Against custom, her inaugural speech was regularly interrupted by her parliamentary colleagues with sexist remarks. When addressing additional costs required to install a women’s toilet in Parliament for her use, Cowan was interrupted by Mr Lambert suggestively asking “Will you invite us to see how the money was spent?”. Cowan’s dignity prevailed in this moment and she continued with a speech that foretold her parliamentary service; steadfast dedication to promoting migrant welfare, infant and maternal health centres, and women’s rights. 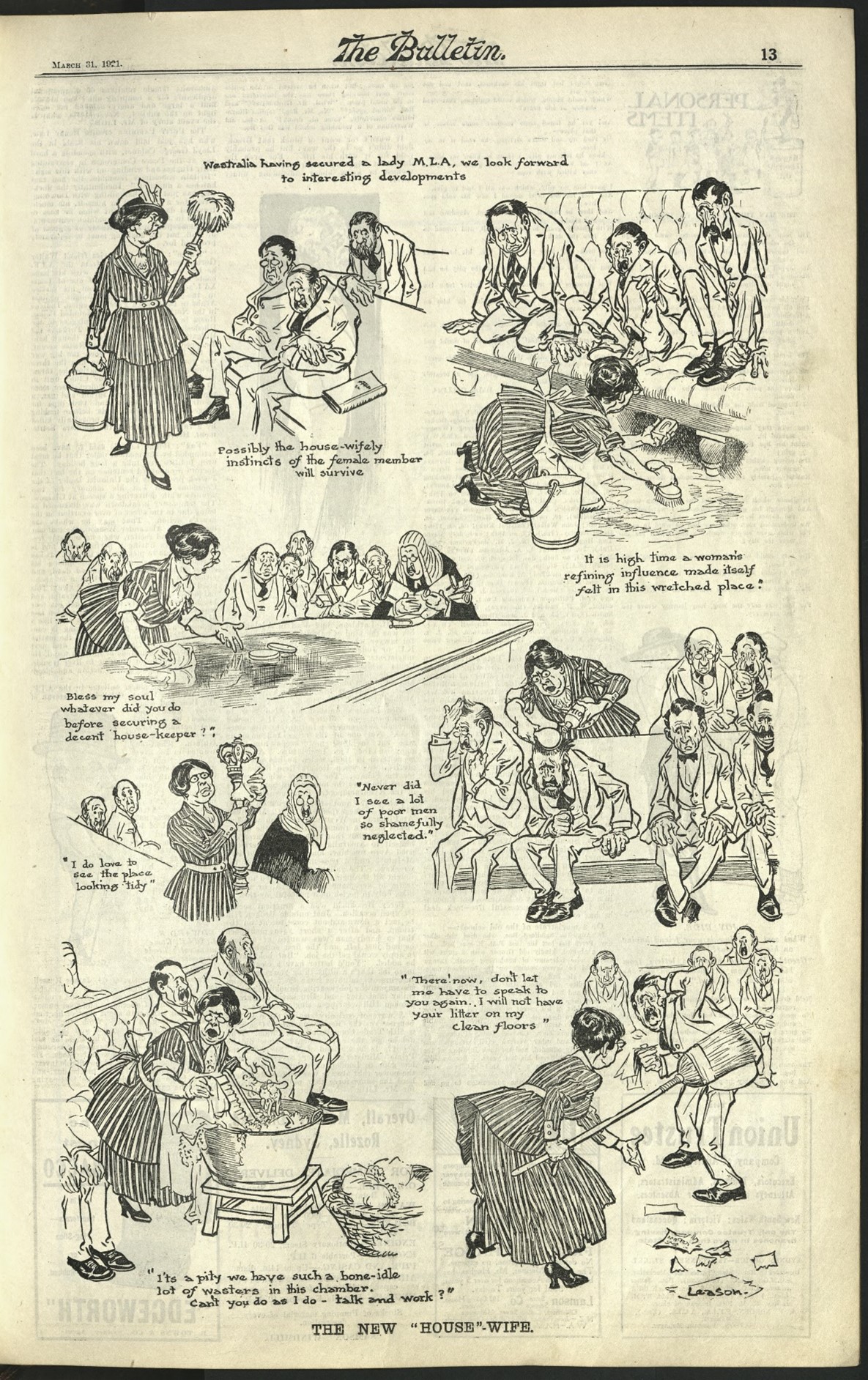 ‘The New “House” Wife’, The Bulletin, 31 March 1921. Courtesy of the National Library of Australia.

Upon her death, aged 70 in 1932, Cowan was remembered as a trailblazing feminist who dedicated her life’s work to the welfare of women and children in her community. Her likeness adorns the Australian $50 note, her name given to Edith Cowan University and her memorial clocktower stands at the entrance to King’s Park, Perth. Cowan’s legacy is her social justice advocacy; work that is carried on by the organisations and institutions she established across her lifetime which continue to serve the Western Australian community today.

Inspired by Cowan’s service and continuing legacy of social justice advocacy in Western Australia, the Law Society is holding a panel event during Law Week 2021 to look ahead at the work still to be done. Cowan’s legacy of social justice advocacy is vast, but incomplete. While Cowan vowed to represent the interests of women and children during her time in Parliament and her community work from the 1890s reflects her advocacy for the protection of mothers and children, in 2021 the panel will reflect on the silences of history and give voice to those who were not protected. As the groundswell of the modern women’s movement rises again, it is a timely reflection of Cowan as a woman of her time, what she achieved, who were excluded and how much is yet to be addressed and achieved today. Facilitated by Deputy Lord Mayor, City of Perth, Sandy Anghie, this panel will present the voices of leading advocates working in the social justice arena advocating for change, law reform and equality for all women.

“The Women Should Have a Voice”: Edith Cowan’s legacy of social justice in Western Australia is on display at the Old Court House Law Museum until early September 2021. The Museum is open 10.00am to 4.00pm, Tuesday to Friday. Entry is free.