The Terrace right at home in the city

The Terrace Hotel Restaurant is steadily making a name for itself as a dining destination among Perth’s business community, despite a number of setbacks. Shanna Crispin reports. 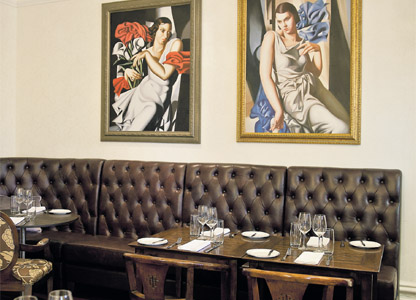 The Terrace Hotel Restaurant is steadily making a name for itself as a dining destination among Perth’s business community, despite a number of setbacks. Shanna Crispin reports.

LAST year didn’t go to plan for developers of The Terrace Hotel and its adjoining restaurant on St Georges Terrace - development costs escalated, opening date was delayed, and then a freak wind storm forced its temporary closure just weeks before Christmas.

Little more than two months on and the business is settling into routine operations, slowly but surely bringing in more clientele.

The venue officially opened in early November following three years’ work restoring the heritage St Georges House - built by the Anglican Church in 1982 - into a restaurant and adding new upper storeys to house a 15-room hotel.

Western Australian families the Perrines and Pyes are the partnership behind the venture; one with a history in architecture, the other experienced in WA hospitality, accommodation and cinemas.

General manager Michael Collins was recruited at the start of the development process, which he says was an eventful period.

“There’s a lot of red tape for all hospitality businesses to go through, but the red tape we experienced set back the timeframe and increased the cost to build and restore significantly,” Mr Collins says.

In some ways the delays were a blessing in disguise for executive chef Shannon Wilson, as it afforded him an additional month to prepare his English-style menu with Asian influences.

Things were going well in the restaurant’s first fortnight, but then the roof of the heritage building-section of the venue was lost in a severe storm.

“We’d been open two weeks ... and we would have just started the day and there was a big crash, the whole roof just tipped over and took one of the heritage chimneys with it,” Mr Collins says.

Despite the venue reopening just eight days after the incident, Mr Collins says there have been significant ramifications for the business.

“A lot of bookings were cancelled because we couldn’t give them a guarantee that we were going to be open, and that had a flow-on effect down the line,” he says.

“And also people thought we were closed; when your roof comes off I don’t think anyone expects you to be open again in eight days.”

But Mr Collins says business is now settling into a routine with word of mouth slowly spreading among the business community as 2013 gets into gear.

“As every day goes by, and we see the corporate world go back to work, we are seeing an increase in patronage,” he says.

“Word of mouth is still a big feature in this city; once people taste Shannon’s food and realise they’re not having to go to the bank to get a loan for it, they’re really pleased.”

The perception that The Terrace Hotel sits among the more expensive restaurants in Perth has been problematic for the business, and is an issue management is attempting to rectify with avid social media marketing.

“There’s a misconception that we are out of reach to the normal consumer. To be honest I’m not sure how that has got out there,” Mr Collins says.

The restaurant has just launched a fresh menu, which includes cheaper burger and salad options (both under $30) for corporate lunchtime clients who may not have the luxury of extended midday breaks.

It’s just one in a number of venues springing up on The Terrace, but Mr Collins says he’s not concerned about the level of competition from nearby restaurants such as 9Marys, Bar One, or even those in Brookfield Place.

“I think those guys all do a fantastic job, and I think we’re working with them to try and create a food and beverage precinct for the city,” he says.

“For us it’s all about bringing more business to The Terrace, I don’t think we’re all competing with each other.”