The Burswood experience is all about Yú

Fresh produce and a mix of traditional and modern cuisine are on the menu at Yú. 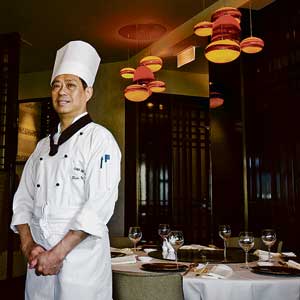 THE Burswood Entertainment Complex has had an Asian flavour since businessman Dallas Dempster and Malaysian casino operator, Genting Berhad, built it in 1984.

In the 25 years that have passed, Burswood has become an entertainment precinct with a 24-hour casino, Burswood Dome, eight bars, a nightclub, two international hotels, a convention centre, theatre, and eight restaurants.

In its latest transformation, the entertainment complex has unveiled an expansion of its restaurant and bar offering, revamped the gaming floor, upgraded facilities, and modernised the interior décor.

"Burswood has undergone a massive transformation and will continue with plans for major and minor refurbishments to ensure the vision to create a world-class entertainment precinct comes to fruition," Burswood spokesperson Denise Cheir told Gusto.

"The expansion of the facilities and improvement of existing areas ensures that the complex is constantly evolving and providing new venues and entertainment services to Australian and overseas guests."

Chef de cuisine Pat Cheong has seen Yú evolve over that time, having brought his culinary skills to the complex from Hong Kong during the 1980s.

Speaking through a translator to Gusto, Cantonese-speaking Mr Cheong said although Burswood has changed significantly over the past 25 years, three-quarters of his staff have been long-time contributors in the kitchen.

"There have been a lot of changes; the management and the CEO has changed quite a few times, and then the restaurant changed from Genting Palace a few years ago," he says.

"But most of the team are experienced staff from a long time ago, so very few staff changes have been made."

Sought after by top hotels and restaurants across the world, the highly regarded chef has more than 25 years' industry experience, and worked at the prestigious Diamond Restaurant in Hong Kong before joining Burswood's Genting Palace in 1986.

Transforming the restaurant into the premium dining offering in May 2006, Mr Cheong and his team played an important role in the award-winning success of Yú.

"I love the opportunity to introduce people to new tastes but to retain the traditional ingredients," he says. "Quality is my philosophy - I only cook with the finest and freshest WA produce available. At Yú, our team philosophy is simple yet sophisticated - the ingredients speak for themselves.

"Burswood has given me the platform to launch a long and interesting career. I have had to move at times, but at the same time I have retained old favourites on my menus."

"The most important thing is the team in the kitchen. Everybody works together, everybody is enthusiastic and feels pride about their work. The processes we use in the kitchen are very advanced and powerful, and these two important ingredients help me perform the best," Mr Cheong says.

Yú Restaurant manager Daniel Man says while several renovations have occurred during his 17-year career at Burswood, the transformation of Genting Palace to Yú has been the most exciting.

"The team is committed to ensuring that our guests receive only the best, most efficient and friendly service and that they come back time and time again," he says.

"We have many regular diners who love to eat with us and that is why we have won so many awards and accolades - working as a team and adapting to changing times."

The Burswood Entertainment Complex rebranded in 2005 to coincide with the opening of the Holiday Inn, the Burswood's second international hotel.

Sirocco Restaurant and Bar and the formerly named Genting Palace, were also transformed around this time.

In 2006, (A)lure Dining Room and Bar was opened, and refurbishments commenced at the Burswood Convention Centre, namely the meeting rooms called The Studios.

The redevelopment of the meeting rooms and Windows Restaurant also included the opening of the Pearl Room, Burswood's VIP international gaming facility.

Throughout 2007, work was completed on MINQ Bar and Lounge, an indulgent, New York-style bar. The Riveria Room located below MINQ was also redeveloped in the space previously occupied by Burswood's VIP international gaming room.

Last year, the complex underwent further expansion, with the Carbon Sports Bar completed inside the gaming room, and the new Mesh Bar opened at the casino's new-look entry.

Further refurbishments took place on the main gaming floor in the space beside Champions Bar to create the Poker Room, which was also launched in late 2008.

"The continuous revamp has provided a wider variety of food, beverage and entertainment offerings to guests and the consistent improvement in these areas means that they are afforded the best possible services," Ms Cheir says.

"The diversity of restaurants and bars also caters to a wider cross-section of people, ranging from those after a casual experience to those seeking a more premium experience."