Take the politics out of GST debate

A tax rise is not tax reform, but an increase in the GST rate or a widening of its base could be part of a worthwhile package. 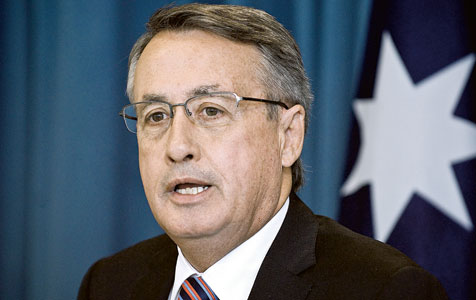 A tax rise is not tax reform, but an increase in the GST rate or a widening of its base could be part of a worthwhile package.

THE man who may be Australia’s next treasurer, Joe Hockey, kicked off some lively debate this week after agreeing that a future Liberal government would include the GST in its proposed tax review.

Mr Hockey’s stance was a big change from the current Labor government, which would not allow the 2010 Henry tax review to consider changes to the GST.

At first glance, that seems all wrong – the Liberals being open to a tax increase but Labor opposed.

The reality is far more interesting and takes a brief history lesson to fully appreciate.

When the GST was first proposed, the idea was that introducing a single big new tax would pave the way for the abolition of many smaller, inefficient taxes.

That plan went awry for a number of reasons, including the famous deal where the Democrats agreed to support the GST only if food was excluded.

That immediately took a big chunk out of the expected revenue and crimped the ability of the states to scrap other taxes such as payroll tax and stamp duty.

Their exclusion was driven by equity concerns, but that logic breaks one of the basic principles of tax reform – an acceptance that different taxes serve different purposes.

The role of a GST is to raise large amounts of revenue in a relatively efficient manner.

Equity objectives can be pursued through other taxes, such as capital gains and income tax, or through government spending programs.

The amount of revenue raised through the GST can be lifted in two ways – broadening the base to include currently exempt spending, or lifting the rate.

Most countries that have introduced a GST have subsequently lifted the rate, and that was one of the concerns raised when the introduction of a GST in Australia was first debated.

But think about what could be achieved if the GST tax-take did increase.

Think of all the compliance hassles and paperwork and disputes that would disappear if the states had the capacity to abolish more of their annoying taxes.

The prospect of the GST ever being increased is fairly remote. It needs the support of all the states, followed by national legislation.

Opposition leader Tony Abbott has agreed the GST will be part of the tax review he will commission if, as expected, he wins the September election, and any changes would be put to the people at a subsequent election.

Among the states, any debate over lifting the GST rate or broadening the base is likely to descend into a fight over the distribution of GST.

Western Australia currently gets a raw deal from the GST carve-up, but other states have no interest in giving up some of their revenue.

Nor, it seems, does Mr Abbott, judging by the advertisements he has run in Tasmania declaring that he will protect that state’s large (per capita) share of GST revenue.

One of the risks from a GST review is that it will simply result in Canberra, and the states, presiding over a hike in their overall tax take.

That would be a tempting way for them to tackle their current budget woes. All around the country, governments are struggling to find sufficient savings to bring their budgets back into balance.

In WA’s case, the danger is that a projected budget surplus will fall into deficit if remedial action isn’t taken.

This outcome partly flows from changed economic circumstances, including a fall in mining royalties.

More significantly, however, it reflects a structural imbalance, with growth in government spending in WA consistently outstripping revenue growth.

The best way to address that is through a brave government being prepared to make the tough decisions.

Having dealt with spending, the next step would be a comprehensive review of the tax system and ideally a package that leaves Australia with a simpler, more efficient tax system.