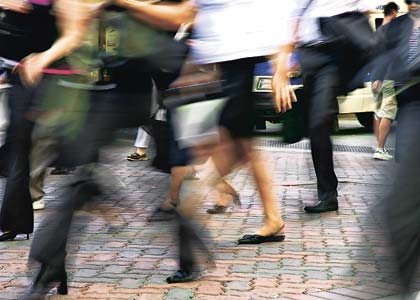 OLDER: The ABS projects the percentage of over-65s in WA will increase from 13 to 22 per cent over the next 40 years.

The document focuses primarily on managing the state’s expanding population and sustaining economic growth, in contrast to the previous strategy focused on land-use planning.

Planning Minister John Day said Western Australia was undergoing a period of transformation, both in terms of economic development and changes to the state’s demographic makeup, which would demand strategic management in order to ensure sustained growth.

“This growth brings both opportunities and challenges, especially in the areas of housing, infrastructure and amenities,” he said.

The Australian Bureau of Statistics projects that on current trend WA’s population will increase from 2.4 million to 3.5 million by 2056. (The bureau’s ‘high-growth’ scenario projects a population increase to 5.4 million that year.)

Overseas migration accounted for almost two thirds of the state’s population growth from 2000 to 2011, according to the Committee for Perth, with interstate migration representing just 2.5 per cent of growth.

Urban Development Institute of Australia WA chief executive Debra Goostrey said with population growth creating strong demand for new dwellings, the challenge for the government was “getting on with the job”.

“With rental vacancy rates at less than 2 per cent and homelessness increasing, we seem to spend a lot of time planning rather than addressing the core issue of the demand for affordable housing,” she said.

While WA’s population continues to become more ethnically diverse, it is also ageing. The ABS projects that the proportion of the WA population aged 65 or over will increase from 13 per cent to 22 per cent over the next 40 years, creating challenges for government as well as the private sector.

As the resources industry continues to drive the state economy, a key challenge will be to attract more skilled workers. With an estimated 1.5 million to 2.2 million Western Australians expected to be in the workforce by 2051, an additional 700,000 skilled workers may be needed to service the demands of the state’s anticipated economic development.

“Attracting and retaining skilled people will be critical yet also increasingly difficult, as these people will have greater choice about where they live, work and develop business,” the strategy document says.

Creating greater levels of liveability in regional centres is highlighted as an essential move for the government in the years to come as it aims to retain skilled workers, with Royalties for Regions-funded initiatives such as the SuperTowns program likely to drive such investment.

The strategy also identifies tourism as a key area of focus, with targeted investment required to ensure regional areas continue to attract visitors.

Figures released last week by the ABS reveal WA’s regional tourist spots are continuing to struggle, with accommodation occupancy in the regions well below that in Perth.

“WA has the second lowest level of funding for tourism promotion of any state,” he said.

“As a result, hotels are booming in Perth and mining towns from business travel, while regional tourist towns are struggling.”

The draft strategy is open for public comment until late March.