An emerging pipeline of apartment developments could shape a new look for Perth’s western suburbs, but ongoing community consultation will be needed. 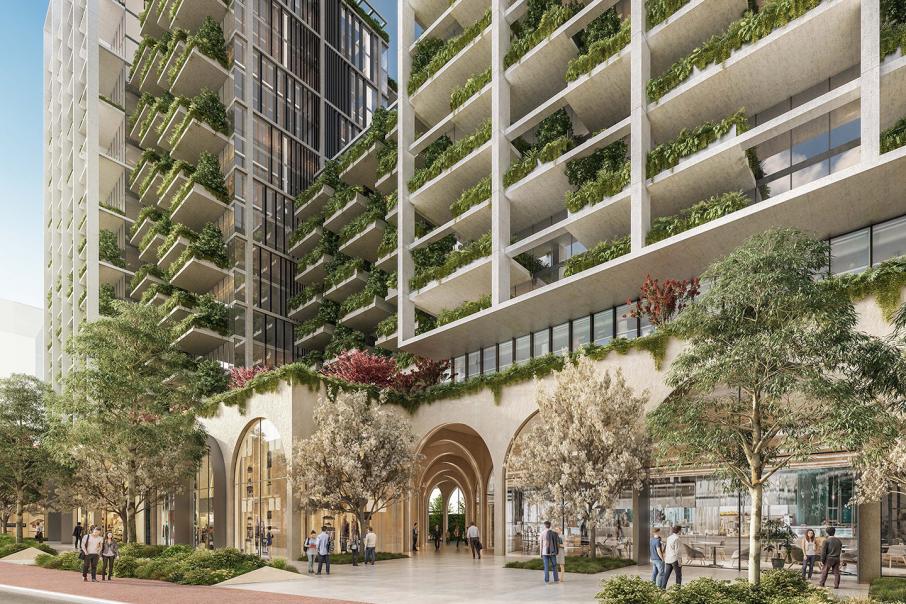 An emerging pipeline of apartment developments could shape a new look for Perth’s western suburbs, but ongoing community consultation will be needed.

Opposition to multi-storey, multi-dwelling developments in Nedlands has echoes as far back as 1936, when a local newspaper summed up the suburb’s sentiments as: ‘Nedlands dreads them’.

Residents at the time rallied to oppose duplexes and tenements of more than two storeys, resulting in the adoption of a by-law so that: “Nothing approaching slum conditions may be encouraged in the Nedlands district,” the article explained.

Eight decades have passed since that article, but the area remains comparatively vertically challenged. In 2020, however, community concerns focus on apartment projects five to 10 times that two-level height. 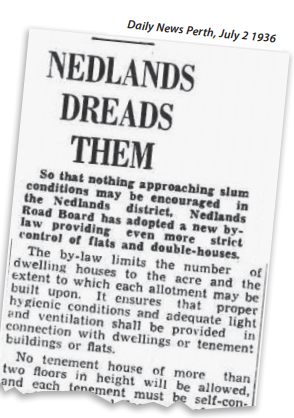 Image: Courtesy of the City of Nedlands.

The tallest of these is Grange Development Consulting and Costa Property Group’s proposed mixed-use development on 97-105 Stirling Highway, comprising 301 apartments as well as commercial office, retail, and hospitality tenancies – spread across four towers ranging in height from eight to 24 storeys.

It’s the biggest residential proposal the City of Nedlands has ever received, and could be the first of many large-scale apartments projects, following a new local planning scheme that replaced Nedlands’ previous iteration, which had not changed since the 1980s.

The council had been working on an updated scheme for the better part of two decades, amid state government calls for more urban infill in and around inner-city locations.

Using the powers under the Planning and Development Act, Lands Minister Rita Saffioti stepped in to develop Local Planning Scheme 3 (LPS3) in line with density targets, which was gazetted into law in April 2019.

Part of the new scheme involved significant rezoning, contained to ‘key corridors’: up to seven storeys permitted along Broadway; 10 storeys plus along Stirling Highway; and up to three to five storeys within some streets off Stirling Highway.

City of Nedlands Mayor Cilla De Lacy inherited the new scheme, and its associated community consternation, when she was elected in October 2019.

Ms De Lacy said it had opened the door to a tsunami of development applications as the result of pent-up demand for redevelopment, leaving the community feeling as though it had no say in Nedlands’ future.

“It has created a feeling of powerlessness and helplessness,” Ms De Lacy told Business News.

“Nedlands council also failed to develop a local planning framework during the time the minister was developing the scheme, and hence when the scheme was gazetted there were no locally based policies to guide development in areas rezoned.

“It’s been described by some as a developers’ dream and a community nightmare.”

Part of this ‘dream’ stemmed from a clause under LPS3 governing building height, which Ms De Lacy said had no restrictions on height in the designated ‘mixed-use zone’ on Stirling Highway.

Grange and Costa’s four-tower development falls within this zone, the land additionally noted as a logical landmark for a town centre.

Ms De Lacy said she had received 576 community submissions for the project, with fewer than 50 supporting it.

There was no local context for the proposal, she added, comparing South Perth as an established apartment neighbourhood.

Grange managing director James Dibble said context had to be considered in future terms, with the first development in any activity centre in transition to bring about changes in height.

He said Grange had undertaken significant community consultation before the design process, surveying locals on fundamentals including bedrooms, amenity, and building material preferences to help guide the project’s architects.

Based on those discussions, it was clear that, if the project were exemplary in all aspects, there would be demand, which had subsequently translated to significant off-market interest.

“What we understand from residents is that they agree there is a need and somewhat an inevitability of density in Nedlands. It is how that density is spread that was concerning to most,” Mr Dibble told Business News.

“I have to agree with residents that density for density’s sake is not a logical urban planning or architectural outcome, nor is it a good thing for the community.”

Mr Dibble said good urban design principles globally had dictated that activity or town centres should be centralised, with neighbourhoods to benefit from the amenity development brought, such as new hospitality, retail, entertainment and commerce offerings, all currently proposed for the Nedlands site.

“By locating density in the heart of a suburb, one can alleviate almost all density from fine grain streets and thus preserve the streetscape and architecture that has taken generations to develop,” he said.

“We will never develop in fine grain streets of suburbs, and never have for this reason.”

Urbanista Town Planning co-founder and director Petar Mrdja has been involved with several development proposals since the scheme change, with one five-storey 15-apartment project on Vincent Street receiving four pages of written refusal.

The biggest issue he said was community and council opposition.

“This where the City of Nedlands has dropped the ball a bit unfortunately; they’ve been so focused on fighting the new zonings that they’ve probably taken their eye off actually having good policies in place to encourage good built-form outcomes,” Mr Mrdja told Business News.

Mr Mrdja said most development proposals so far had reflected the area’s existing affluent standards in terms of design, but unlike other councils, Nedlands still lacked a design review panel that could further ensure consistency.

Additionally, he said Nedlands now had a greater opportunity to improve its dilapidated housing stock and diversify, by providing short-stay accommodation and options for those otherwise priced out from the area.

“When you throw in the new planning document, a council that doesn’t have much of a policy framework, community opposition … it’s a pretty complex process,” Mr Mrdja said.

“In 50 years’ time we’ll look back [and think] while it was far reaching at the time and a real sort of change, it was well worth it.”

Edge Visionary Living managing director Gavin Hawkins understands what it takes to get projects out of the ground in the western suburbs, having developed Botanical Subiaco and with Eden West now under construction in Floreat.

Mr Hawkins said some level of conflict was healthy in order to hold developers accountable to high standards and eradicate past poor development.

The real underlying issue, he said, had been Perth’s immature apartments market, compared to the east coast, where apartments generally made up close to half of all housing types.

“The challenge for us as developers is probably getting better at communicating the benefits of well designed-infill projects with the local communities,” Mr Hawkins told Business News.

“We’re all worried about what we don’t know much about.”

Mr Hawkins said while community opposition needed to be considered, there seemed to be plenty of support in terms of sales.

He said owner-occupiers accounted for 98 per cent of Botanical Subiaco buyers, with 70 per cent previously living within four kilometres of the site.

“The majority of our buyers will be people from the western suburbs who want the convenience of apartment living … that’s the irony,” Mr Hawkins said.

“Our average age of buyers is around 62-65 years. There’s a financial incentive for them to downsize, security of apartment living …these people want an easier, communal lifestyle where they can lock up, leave and go travelling.”

Subiaco is on the cusp of another growth spurt, with the development of Blackburne’s $280 million, 242-apartment ONE Subiaco reaching 24 storeys.

Managing director and founder Paul Blackburne recently lodged a development application for an additional western suburbs project at the intersection of Stirling Highway and 1 Airlie Street in Claremont, bordering Peppermint Grove and Cottesloe.

The $300 million project will transform the rundown Sundowner centre site into five buildings featuring 245 apartments, as well as parklands and hospitality offerings accessible to the broader community.

“The WA market has a substantial shortage of larger high-end apartments in prime locations and a lot of smaller low-quality apartments in B-grade locations,” Mr Blackburne told Business News.

Mr Blackburne said multiple demographic shifts had driven demand for his projects, including Baby Boomers looking to downsize, and young professionals who had grown up in the area.

He said initiatives like Design WA, a comprehensive design policy suite introduced in 2019, would help to ensure more high-quality projects were developed in the right locations.

“The Perth apartment market is at its most exciting time yet,” Mr Blackburne said.

“Prices are cheaper than ever, and with construction prices so low we are able to deliver quality.”

The state government’s Directions 2031, released in 2010, which set an urban infill target of 47 per cent, helped generate momentum for more high-density developments.

Urban Development Institute of Australia WA chief executive Tanya Steinbeck said that, for Perth to sustainably accommodate population growth to 3.5 million people in the coming years, it was imperative that a diversity of housing was provided in both new and existing areas.

“It is not just the growing number of people that we need to accommodate, it is the different lifestyles and evolving needs of people,” Ms Steinbeck told Business News.

“The western suburbs are well located between the beach and the river, [are] close to the city and well serviced by infrastructure such as the train line.

“There are various locations throughout the western suburbs that are appropriate for medium- and high-density infill development. It is important to understand that we are not talking about blanket density. This is about choosing the right locations for quality development and positive outcomes for the community.”

To achieve the best outcome for communities, Ms Steinbeck said, local governments needed to update their local planning schemes appropriately to develop a shared vision for the future of their area.

“This is when meaningful community consultation should occur; early in the planning process rather than debating individual projects,” she said.

“This provides the community and developers with greater certainty.

“There are fantastic opportunities to provide quality redevelopment that adds vibrancy, choice and, importantly, affordability to these areas, and that will lead to positive outcomes for current and future residents in the western suburbs.”

Ms Steinbeck said decision-making needed to be based on the needs and perspectives of the majority, with most local residents supportive of quality medium- and high-density developments in the western suburbs as long as they were located appropriately.

“Considering the conversation around future development in the western suburbs has been volatile in recent years, there is no doubt that we still have a bumpy ride ahead when it comes to planning and delivering a greater diversity of choice in these areas,” she said.

“It is imperative that stakeholders come together and agree on a shared vision of the western suburbs.

“Local governments need to be leaders in this space and advocate for a sustainable, vibrant future for their neighbourhoods that is inclusive of a range of people’s housing needs.”