Spectrum hits six ounces to the tonne at Penny North

Spectrum Metals’ Phase II drilling campaign at the Penny West project near Youanmi, WA, has returned top results of 1m @ 180.3 g/t gold from 206m down-hole and 11m @ 11.7g/t gold from 229m from the first holes drilled at the Penny North prospect. The results have already doubled the down-dip extent of the Penny North lode on this section while results are pending for two up-dip holes on the same drill section. 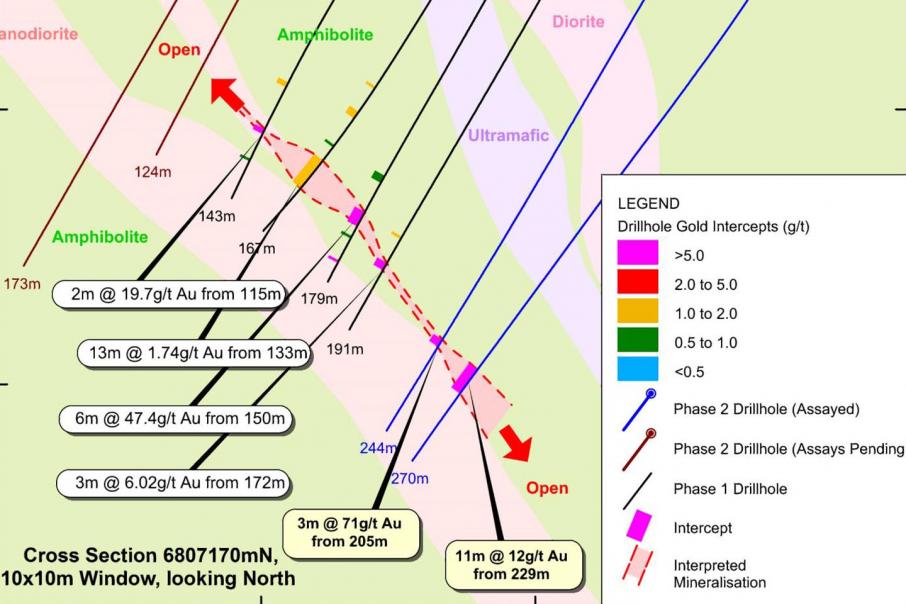 Spectrum Metals’ Phase II drilling campaign at the Penny West project near Youanmi, WA, has gotten off to a rousing start with the first holes at the Penny North prospect returning a metre at more than 6 ounces of gold to the tonne.

The top two results are located down-dip of a Phase I intersection of 6m @ 47.4g/t gold from 150m and add about 80m to, and effectively double, the down-dip extent of the Penny North lode on this section.

Results are currently pending for two up-dip holes on the same drill section.

Together with the Phase I drilling results that included such zingers as 4m @ 105.2g/t gold from 151m down-hole and 11m @ 25.8g/t gold from 120m, the Penny North prospect is certainly stacking up.

Spectrum Managing Director Paul Adams said: “We are very excited to see the high tenor and high width of gold mineralisation continue in our Phase II program, particularly within hole SPWRC040 which is the deepest hole yet assayed at Penny North.”

“It appears that the Penny North structure again widens at this location and remains open down-dip and along strike.”

The Penny West gold project is situated on two granted mining leases about 25km south from the Youanmi mining centre in the Murchison district of Western Australia.

Penny West currently has a JORC-compliant mineral resource estimate of 230,000 tonnes grading 4.8g/t gold for 36,000 ounces below the historical pit.

Given the numerous high-grade hits returned from the drilling at Penny North to date, Spectrum could well be looking at a sizeable upgrade to this resource in the not too distant future.