Spectrum Metals has added a bit of polish to its Penny West project near Youanmi in WA discovering 14 metres of mineralisation grading 14.4g/t gold and 4.11g/t silver from 124m down-hole. The zone is north of the historic Penny West open cut, that produced 85,000 ounces grading 21.8g/t gold in the early 1990s. The company said it would expand its drilling to follow up the new find. 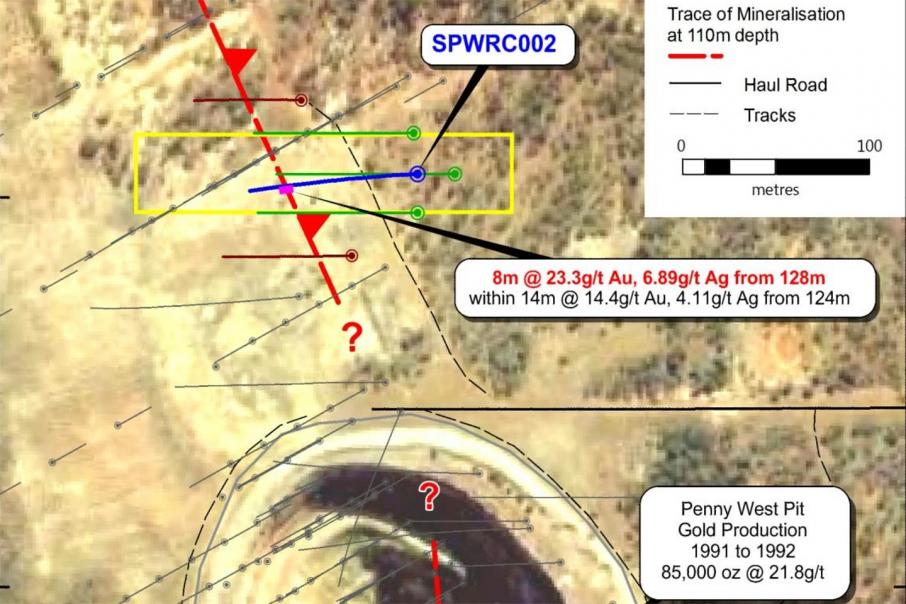 More importantly, the thickened ore zone is 40 metres down-dip from a historical hole that returned a narrow, but anomalous metre interval at 6.47g/t gold.

The new intersection is open in all directions and crucially, has similar geological characteristics to the Penny West high-grade ore lode mined from an open pit to the south, inferring it may be part of the same mineralised system.

Managing Director Paul Adams said: “This intersection, in the first hole submitted for analysis in our maiden program at Penny West, has exceeded our highest expectations at this location, both in terms of tenor and width.”

“The fact that the mineralisation style and grade is essentially the same as was mined previously gives us confidence that the newly discovered zone is contemporaneous with the original high-grade mineralisation that made Penny West such a famous name in WA mining history”.

Based on the impressive assay results, Spectrum will immediately expand its present drilling program at Penny North to follow up the significant wide intercept.

The touted 4,500 metre maiden drill campaign is aimed at defining and extending the mineralised envelope below the Penny West open pit, but the discovery to the north will now give the company cause to rethink its short-term drilling strategy.

As so often happens at abandoned mining operations in the WA Goldfields, some lateral thinking has turned up an unexpected discovery and with the gold price nearly quadrupling since the early 1990s, the new results could not have come at a better time for the company.

With that in mind, the new extension to the north looks very promising for the company as it starts to build critical mass and consider re-starting mining operations at Penny West, which already sits on a granted mining lease.

The Penny West gold project is located just 30km from the mothballed Youanmi operation in the under-explored Murchison mining district of Western Australia.

These areas will also be drilled with exploratory drill holes during the current campaign on-site.