WA companies are still facing a challenge to find staff despite reduced mining construction and a rise in unemployment. 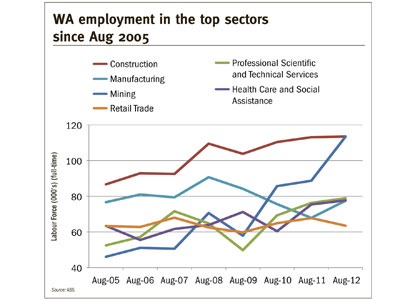 WA companies are still facing a challenge to find staff despite reduced mining construction and a rise in unemployment.

RECENT cutbacks in Western Australia’s mining industry following a drop in iron ore prices may have boosted the number of people looking for work, but it’s of little benefit to the big employers increasingly looking for those with specific skills.

Since 2005, the construction sector has been the backbone of the state’s employment market.

It is the biggest employing sector in the state - accounting for 12.2 per cent of WA’s total workforce - and has undoubtedly been helped by the mining boom in recent years; construction of resources projects has replaced declining demand for housing and commercial construction.

The rise of the mining sector is evident in the number of people it now employs. Mining rapidly caught up to the construction sector in the past three years and now employs about the same number of staff.

Both industries account for about 113,000 full-time workers, which, when combined, represents just less than one quarter of the state’s total full-time workforce of 926,000 workers.

In the past year the mining sector has grown its share of the workforce by 27 per cent -showing its increasing role as a significant employer compared to construction.

The construction industry has stagnated, however, with a rise in employment of only 0.3 per cent in the year to August 2012.

That slowdown in construction has continued in recent months as decisions by big miners to pull back on capital projects cascaded through to construction contractors.

A key example has been Fortescue Metals Group halting construction of the Kings mine in the Solomon hub - laying-off about 1,000 staff and contractors in the process - when the iron ore price fell to a two-year low in early September.

While that decision, and a flurry of other mining pullbacks, prompted commentary that the mining boom was over and labour shortages would not be as severe, that analysis is far from the truth.

Construction activity may have slowed, but commentators suggest it could be a very different story in 2013.

Pitcrew Consulting director Peter Dyball says potential mining projects such as Hancock Prospecting’s Roy Hill mine and Rio Tinto’s continuing expansion in the Pilbara have the potential to employ thousands of workers.

Even if the outlook for iron ore producers doesn’t improve and projects don’t get off the ground, projects already under way and the state’s growing oil and gas sector will I keep the number of available workers low.

Such projects have prompted a forecast from the Chamber of Minerals and Energy that the state will require a further 9,000 resources-focused workers in the next two years.

While the coming years appear promising for employees, it’s post-2014 that may be problematic as it’s then that employment in the sector will reduce thanks to construction projects giving way to operations.

From 2018, the total resources workforce is expected to reduce to below the current number

Pitcrew Consulting, which specialises in labour market analysis, has stated that labour availability has improved in the past year, but warned this was a result of training and up-skilling programs starting to make an impact, rather than reduced demand.

Mr Dyball said the outlook was far from rosy for employers looking to increase their workforce.

“I wouldn’t say there’s an abundance of people ... the projects that are currently under way have the best chance of finding their workforce,” Mr Dyball told WA Business News.

He said a threat to that recruitment lay in increasing activity on the east coast potentially drawing needed construction workers away from WA.

“The amount of work that’s already committed in Queensland is going to increase over 2013 before it eases, so one of the tilings that might happen in WA is that maybe those people working here might be enticed to go back to work on better projects,” Mr Dyball said.

There are currently three significant LNG projects under construction in Queensland, while Inpex’s Ichthys project in the Browse Basin off Darwin is forecast to need 3,000 workers during construction and 700 permanent operations staff once construction is complete.

Chamber of Commerce and Industry WA chief economist John Nicolaou agreed there had been some easing in the market, but that was unlikely to continue in the long term.

“When you look at job creation it’s important to take a longer-term perspective ... it’s fair to say that there has been some easing in demand from resources as a consequence of a more uncertain environment in key commodities, but I suspect that that easing is not going to be a permanent fixture,” Mr Nicolaou said.

“With the pipeline of activity that’s already under way and the likelihood of it continuing to grow, demand for workers will continue to grow.”

The influx of about 5,000 people a month to the state has helped to fill these roles, but has also been partly responsible for the state’s unemployment rate increasing to 4.6 per cent in October.

Despite increased migration, both internationally and interstate, employers were still finding it difficult to recruit workers with the level of skills and experience required.

The future transition in the oil and gas industry from construction to operations will be a prime example of a recruitment scenario where operations staff are required to have at least some level of experience - especially given the WA industry’s infancy and, hence, lack of experienced staff locally.

However other sectors are also facing an uphill battle in recruiting suitably qualified and experienced staff.

A study by Monash University has predicted that the health and social care sector will be the most active employer up until 2015; it forecast an annual growth rate of 4.8 per cent and total recruitment of more than 24,000 workers by the end of 2015.

Significant demand for these workers will come from the opening of both the Fiona Stanley Hospital and St John of God Health Care’s Midland Health Campus in 2014 and 2015 respectively.

St John of God is looking to recruit about 1,000 medical staff to fill roles across all its hospitals by the end of 2015 - a number impossible to be met by current or future staff in the WA market.

Mr Dyball said taking advantage of migration schemes, such as the temporary 457 visa (for more see Short-term focus hinders migrant work flow) will come in to play for St John of God.

“At the moment we need medical and health workers but that’s a sector that’s going to continue to suffer from skills shortages,” he said.

“There’s a misconception that all the overseas workers that come here on the 457 visa are coming to work up north, but actually that’s not the case.”

According to the Monash study, electricians were in greatest demand in terms of occupation growth in the 2010-11 financial year, with 7,200 jobs having become available for electricians.

National Electrical and Communications Association WA general manager Ray Harris said that demand, and the impending retirement of many baby boomers, meant emphasis needed to remain on training and the sector should not become complacent in the current quiet period.

“It’s a very patchy economy and some are struggling, so it’s not so much of a difficulty getting skilled staff at the moment but it seems the heat has come off a little bit,” Mr Harris told WA Business News.

“But there are a lot of workers who will be looking at retirement in the next five years so training and apprenticeships are still important; it’s probably the same with teachers and other industries whereby you have a large cohort of workers in that near-retirement age.”

However it was that commitment to training that Mr Dyball said was in jeopardy due to persistent claims WA’s labour shortage was nearly over.

The downside is that if the result is a downgrade in investment in training and education then the industry will suffer,” he said. “It would be nice to see all the strategies that have been developed over the past few years to combat all of those skills shortages continued, because if we don’t we’re just going to continue going through these cycles.”

The CCI’s prediction is that the state will experience a shortage of 180,000 workers across all sectors by 2020 - a predicament Mr Nicolaou said needed federal government guidance if it was to be overcome.

“The real challenge that we face is that at a decision-making level with government a lot of decisions are being influenced by the politics of the day and are short-term in nature,” he said.

Mr Nicolaou said policy needed to address productivity issues not only in the resources sector, but also in sectors that are labour intensive and struggling to compete alongside wealthy resources employers.

“The big challenge faced by other sectors, particularly where labour is such a key input, is that labour is a scarce commodity and one that we need to ensure continues to grow in terms of the overall capacity of the labour force,” he said.

“We don’t want to see a situation where our wage pressures are growing well beyond the capacity of other sectors to finance.”

The increase in wages growth has been most significant in the resources sector where companies in the same space have been competing for like-for-like labour.

But similar increases have occurred in the professional services sector with wages increasing by 5 per cent in the past year.

“It’s been an issue now for some years and the origins of those pressures are labour shortages,” Mr Nicolaou said.

In contrast to professional services and resources, the retail and hospitality sectors have languished with employers in this space increasing wages by 2.9 and 2.6 per cent respectively.

The effects of this could be seen as associated with a decline in the number of retail trade employees; that sector lost 6 per cent of its workforce in the year to August 2012.