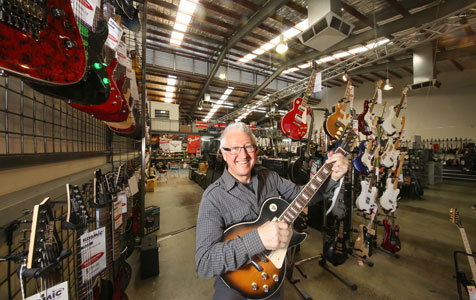 From building PA systems for the Rolling Stones to rebuilding the business after a massive fire, Kosmic Sound managing director John Goldsmith has faced some big challenges in his 40 years at the helm of the sound and lighting retailer.

However, there have been few greater challenges to the business than that posed by the rise of online sales.

It’s a familiar tale in the retail industry, where local sellers have scrambled to cut costs in order to remain competitive.

Like many other sections of retail, the exposure of consumers to a highly competitive global online market has forever changed the way musical instruments and equipment are sold.

Receivers Ferrier Hodgson said the group had been “severely impacted by the downturn in consumer sentiment and discretionary spending in Australia” in recent years.

An 11th-hour buyout by businessman Con Gallin, owner of the rival Gallin’s music chain, kept the brands alive in capital cities across the east coast but was not enough to save the Billy Hyde store in North Perth.

Mr Goldsmith said the discounted offerings of online retailers had proved to be an attractive lure for spendthrift musicians looking to make big purchases.

“A lot of people make it in the industry, but for every one who makes it there’s a thousand who don’t, so it’s an industry where money is always relatively tight but people always desire their dream guitar or something like that.

Kosmic has also invested heavily in its own online sales division, being named ‘best overall user experience’ at the 2012 Australian Web Awards.

While online trade accounted for only around 10 per cent of total sales, Mr Goldsmith expects that figure to grow as customers capitalise on next-day delivery and free shipping options.

While some of its prominent competitors have collapsed, Kosmic remains a visible home-grown presence in the Perth music industry.

The key to survival, Mr Goldsmith said, was in making the business more efficient.

It also meant lowering prices in order to compete with the online market but identifying opportunities for higher turnover, particularly in adding accessories to transactions.

“Whereas 10 years ago we would have bought our guitar stands, microphone stands, all of those things from a wholesaler, we don’t do that now,” Mr Goldsmith said.

“We’ve gone directly to the factories in China.

“You’ve got to buy it by the container-load, so there’s more cost and overheads but there’s still a big difference in the actual margins.”

Kosmic’s efficiency drive hasn’t translated to scaling back operations or cutting staff, however.

In fact while it may seem like an unusual time for an expansion given the forces at work, this is precisely what Kosmic Sound is currently undertaking.

Renovations currently under way at Kosmic’s flagship Osborne Park store will triple floor space to 2,500 square metres, placing it among the largest music stores in the nation.

The new layout has been devised to allow for each major department to have its own separate room, all anchored by a sound design centre demonstrating high-end PA and lighting equipment tailored for business clients.

In addition to its stores in Osborne Park and Cannington, Kosmic owns a distribution division, Galactic Music.