Despite ruling out a run at state politics, Stephen Smith has been vocal about WA’s role in Asia of late. 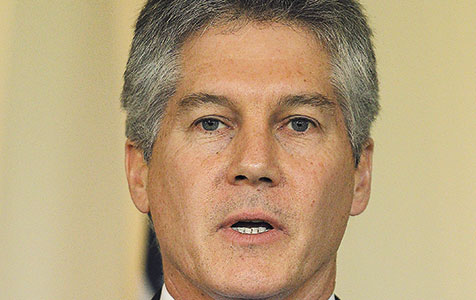 He described the move as "inexplicable".

Mr Smith urged the government to reassess its priorities, calling for resources at the agent general's office in London to be scaled back in order to keep the Indonesian office open.

He said the closure decision coincided with the point in the cycle when a direct Western Australian presence was required in Jakarta to position the state's trade, industry and commercial investment interests in Indonesia "for the enormous opportunities of the future".

Mr Smith's views were included in his wide-ranging 2014 Reid Oration at the University of Western Australia, which honours the late governor and academic, Gordon Reid.

Although he retired at the last federal election after a 20-year career as MHR for Perth, Mr Smith has remained in the public eye with comments on both government and Labor Party issues. This has led to speculation the 58 year old has not ruled out extending his political career by adding a stint in state politics, despite having previously thrown cold water on the possibility.

Mr Smith, who also served as defence minister, said Indonesia – which would have a population of between 350 million and 400 million by 2050 – was vital to Australia's, and especially WA's, economic future.

"This is all part of the international trade and investment engagement skills that our state now needs to take to a higher level," he said.

"And we must get our locations for the future right. Our state Singapore office is widely recognised as working well. Western Australia suffers now from the lack of a representative office in Kuala Lumpur, at the same time as Victoria's presence in KL is very successful.

"Resource constraints are always issues for government, so invariably priorities count. For the long term ... a better allocation of resources would be a full-time presence in India rather than a substantial ongoing presence in London, where the need for government assistance and advice to nurture Australian businesses is substantially less by a considerable margin."

Mr Smith, who is the third longest serving federal Labor MP (20 years) from WA – only Kim Beazley senior (32 years) and junior (27 years) have served longer – said education, tourism, agriculture and public administration were all areas in which closer ties could be developed with Asia, adding there was significant potential in irrigated agriculture.

The former member for Perth, who has avoided getting caught in the Kevin Rudd-Julia Gillard crossfire in recent months, told a testimonial dinner attended by 250 guests that he harboured one great regret in politics. He pointed to the party "losing its nerve in 2006-7" and dumping Kim Beazley as leader, replacing him with what proved to be the fractious Rudd-Gillard leadership team.

He said that, after the 2007 election, "Kim Beazley would have been leader and we would have had a mainstream Labor government as a consequence".

Mr Smith did not take a high profile in the poisonous Rudd-Gillard conflict, although it has been reported he was not a supporter of Mr Rudd being dumped in 2010. But his comments with regard to Mr Beazley indicate he believes that government under the current ambassador to the US would have been far more effective.

Failed federal leadership contender Anthony Albanese, who was guest speaker at the function, said he would have backed Mr Smith as Labor leader if he had stayed in politics.

It's a tortuous process, but it seems Western Australia's case for a better financial deal for the redistribution of revenue generated by the GST is gaining ground.

The twisted logic of piling on lead weights in WA's productive saddle bags, and redistributing revenue to less enterprising states – and then expressing concern about sluggish national economic growth – seems to be slowly getting exposed.

Mike Nahan, who has slipped seamlessly into the treasurer's role this year, and Premier Colin Barnett should take much of the credit. But so too should former state treasurer and Pearce MHR Christian Porter and Liberal Senator Dean Smith, for pursuing the issue, at last, in Canberra.

Mr Porter and Senator Smith are part of a new wave of younger, switched-on politicians who want to do more than warm a seat in the national capital and ask 'how high?' when prime minister Tony Abbott and Treasurer Joe Hockey say 'jump', if they don't think it is in WA's best interests.

The GST reforms may not come in time to save Mr Barnett from his bullish promise in 2009 to never preside over a deficit state budget, but there are signs that the GST wheel is slowly starting to turn. And that is in the national interest, as well as that of WA.