Serving it up in style

A long-time resident of the area, Stephen Hollow knows the market for his Vic Park restaurant, The Silver Spoon. Carolyn Herbert reports. 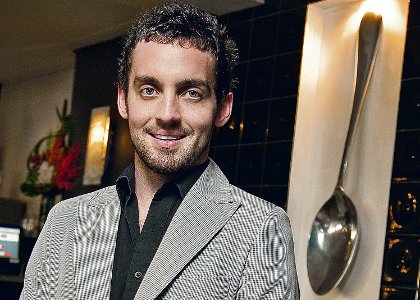 ADJACENT to a 24-hour-deli and across the road from a car yard and pizza shop, The Silver Spoon is located between the old and new of Albany Highway in Victoria Park.

The bustling cafe strip starts a bit further down the highway, and the popular Victoria Park Hotel is a couple of blocks up the other way; sitting in between is The Silver Spoon, which offers brasserie-style lunches, modern fine-dining dinners and a Tuesday night degustation menu.

Principal Stephen Hollow says Tuesday’s degustation has been compared to the likes of Balthazar and Amuse.

Born and bred in the area, Mr Hollow (24) has been managing restaurants since the age of 18, but told Gusto that he initially had concerns about starting a career in hospitality.

“After finishing high school I did a few weeks of computer programming and I hated it, I just walked out of class one day and called my mum and she said ‘what about hospitality’,” Mr Hollow says.

“I said ‘well that’s not really a real job’ ... but I knew it would make me happy, so I managed a restaurant called Farrell’s in Vic Park and I decided to study business and hospitality.”

After completing his diploma and gaining managerial experience at Farrell’s, Mr Hollow was appointed as assistant manager at Deco in 2006, the Raffles Hotel’s new fine-dining restaurant.

“I always said I would give myself two years at the Raffles then try and buy my own restaurant,” Mr Hollow says.

“So one morning I was flicking through the newspaper and saw that an Italian restaurant called Matilda’s was up for sale.”

Mr Hollow used his savings and a bank loan to purchase Matilda’s in October of 2008, around the time the GFC hit.

He told Gusto that he wanted to revamp the business to offer something new to local diners.

“There are 78 restaurants in Vic Park ... and I couldn’t understand why you would have to go to Subiaco or Mount Lawley if you wanted to enjoy a good bottle of wine, a cocktail and fine-dining food ... there was just nothing here that offered that,” Mr Hollow says.

The Silver Spoon opened at the start of 2009, which Mr Hollow describes as ‘ballsy’ considering the effect that the GFC was having on many businesses.

“In light of what was happening of the time, we started off very busy because people could see that we were doing a renovation and we had couple of reviews which were positive,” he says.

However, the menu at The Silver Spoon took some customers by surprise.

“Because we are in Vic Park, people would sit down, order food then ask ‘what is this’,” Mr Hollow says.

“They were confused, they would have dinner and say ‘we used to come here and the food was twice the size’. I would agree, but add that the restaurant used to be called Matilda’s and it’s now The Silver Spoon.”

“Michael is unbelievable, we change our menu every six weeks and we’ve never repeated a dish,” he says.

“And we’ve done that for a few reasons; a definition of modern Australian fine-dining is six entrées, six mains and six desserts so when we have some people coming here two or three times a week ... you have to change it regularly.”

To further grow the customer base of the business, Mr Hollow says he has made a conscious effort to keep the menu as affordable as possible.

“I could charge more and make more money, but at my age I’m more concerned with building a reputation, as I would like to open another restaurant in the near future,” he says.

“It’s about exposing ourselves to as many people as we can at the moment and it’s more about copping the costs now to ensure success later on. If I charge extortionate prices we wouldn’t be as busy as we are.”