Sayers makes it happen with passion

The latest addition to the Sayers business family continues the tradition of local food and good coffee. 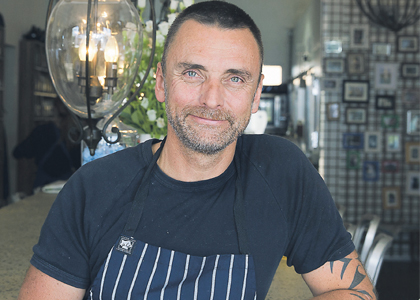 PRIORITIES: Mark Sayers doesn’t put passion before profit, but says the latter is essential if his business is to achieve the former. Photo: Annaliese Frank

The latest addition to the Sayers business family continues the tradition of local food and good coffee. Clint Jasper reports.

WITH their newest cafe venture, Sayers Sister in Northbridge, Mark and Stephanie Sayers have created a trendy space at the top of Lake Street that’s already attracting crowds of eager customers every weekend.

The city space has much in common with the pair’s other business, Sayers Food in Leederville, particularly its focus on fresh, local produce.

“I thought this would be a nice modern day, trendy interpretation of what I believe a cafe should be,” Mr Sayers told Gusto.

“It should be vibrant, the food should be good, it should be locally produced; we were doing this six years ago, so that’s how we came about (in Northbridge).”

Arriving in Perth from the UK in the late 1990s, Mr Sayers soon recognised the good weather and popularity of early morning exercise among the populace provided a business opportunity.

“I noticed the way we operated in this climate, the way we exercised in the morning around the six o’clock mark, and being a bit of an exercise freak used to say 'where do we go for coffee?’ and 'what do we after we’ve trained’,” Mr Sayers says.

Sayers Food in Leederville opened in 2006 and immediately set about offering produce of the highest quality.

“It’s always been a thing of mine, making sure that we buy direct from local businesses,” Mr Sayers says.

“I believe there’s no point in importing or bringing stuff into the state when it’s out of season here.”

It took time and careful consideration before the Sayers decided to take the leap and expand the business to Northbridge.

“It would have been very easy for me to rush in and open another business, but this isn’t about generating more, it’s about making sure you do the job correctly,” Mr Sayers says.

Food and coffee are the essence of the cafe, which is open for breakfast and lunch every day of the week.

“Your staff members are a reflection of the way you present your business. You want your staff to be proud of where they work,” he says.

“I want my staff to come to work and know I appreciate the work they do. I’m the same, every day I work in the kitchen, on the floor, I do all the jobs I expect my staff to do.”

Mr Sayers says he tries to ensure new staff members are a good fit with his existing team.

“If you can get staff enjoying where they work, then it’s not a chore, it’s actually fun, and most of my staff have been with me a long time,” he says.

Dealing with the local council and red tape was one of the most difficult aspects of opening the new cafe, however.

“I think if I wasn’t financially secure from the first venture, opening the second one would have been a complete nightmare,” Mr Sayers says.

Mr Sayers says running two cafes means that he has to be scrupulous with costs.

“Large volumes of people doesn’t mean large volumes of profit, it just means more overheads to achieve the same goal; that’s why a second business can be unsuccessful... because the costs can overrun the second one,” he says, adding that the key to keeping costs down while maintaining the highest possible quality of produce is sourcing food locally.

“I go to market three times a week, and I buy produce that’s available fresh all the time.

“Excess in business is profit, but the first driver has to be passion,” he says.

“Because even when the chips are down, and things aren’t going quite how you want, you’ve still got to make it happen, and that’s business.”