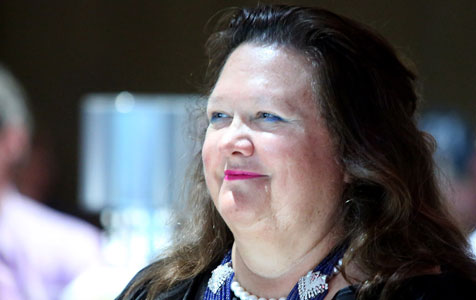 If a fortune valued at $20 billion is not enough for Australia’s richest person, Gina Rinehart, then perhaps she will be happy with $37 billion that is likely to be her net worth at this time next year.

Two events are coming together to boost Mrs Rinehart’s wealth by 85 per cent, a better-than-expected profit from her 50 per cent-owned Hope Downs iron ore mine, and the fact that construction of her 70 per cent-owned Roy Hill mine has passed the halfway mark.

Capping off the future flow of cash from part ownership of two mines is the steady flow of royalty payments from her share of the revenue generated by the Hamersley Iron mines operated by Rio Tinto.

Those three sources of revenue are creating a cash mountain that will catapult Mrs Rinehart up the pecking order of the world’s richest people, from her current status of 46th on the list compiled by Forbes magazine to around 12th.

She will soon be ahead of people such as former New York mayor Michael Bloomberg (16th with $US33 billion) and Amazon founder Jeff Bezos (18th with $US32 billion) but behind the rich-list leaders, Microsoft founder Bill Gates (first with $US76 billion) and Mexican telephone tycoon, Carlos Slim Helo (second with $US72 billion).

What’s driving Mrs Rinehart up the list of the world’s richest people is a combination of iron ore prices, which remain comfortable for high-grade, low-cost, producers, and the start of exports next year from Roy Hill.

The first piece of the puzzle of understanding how much richer she will soon be was in last week’s half-year profit report from Rio Tinto, which lifted underlying earnings by 21 per cent to $US5.1 billion.

The major contributor to that profit rise was a 10 per cent increase in iron ore earnings, a surprise result achieved at a time when lower iron ore prices were offset by increased tonnage shipped and cost cutting, which delivered a boost to overall productivity.

Increased output by most of Rio Tinto’s iron ore mines in the Pilbara means higher royalty payments to Mrs Rinehart and the other beneficiaries of the Hamersley royalty, most notably the Wright and Bennett families.

At current rates of production and current prices, the annual royalty is approaching the $US500 million mark, with Mrs Rinehart annual payment in the vicinity of $US240 million.

If sold tomorrow, her share of the royalty would fetch at least $US2.4 billion, assuming a 10-times multiple on a long-life cash stream. It might even get a lot more.

The royalty, handy as it is as a source of petty cash, pales in terms of serious wealth when Rio Tinto’s profit margins on iron ore production are applied to Mrs Rinehart’s entitlement to 22.5 million tonnes a year of ore from the jointly owned Hope Downs mine.

Thanks to higher levels of productivity and lower costs (and despite a fall in the average iron ore price), Rio Tinto’s gross profit margin on ore produced at its Pilbara mines is around $US58 a tonne.

Because Hope Downs is part of Rio Tinto’s Pilbara system Mrs Rinehart’s gross margin will also be around $US58/t which, on her share of 22.5mt means she is earning before tax, interest and other charges, around $US1.3 billion from Hope Downs. If sold tomorrow this would fetch at least $US13 billion.

Roy Hill is where the next big uplift occurs, and while it has been hard to put a precise value on her 70 per cent of that mine, it is in the final months of construction; which means it will soon be assessed as a profit generator and not just an item of capital works.

With an annual target of 55mt of high-grade iron ore, the stand-alone Roy Hill mine will probably operate at a gross margin somewhat less than the Rio Tinto average with $US50/t a reasonable assumption – meaning that the mine (at current iron ore prices) should generate pre-tax earnings of $US2.75 billion.

Mrs Rinehart’s 70 per cent share of that estimated Roy Hill profit will be about $US1.9 billion. Profit in the early years will be less, but $US1.9 billion is the profit target she is aiming for, and assuming a 10-times multiple, her stake in the mine could be sold for at least $US19 billion.

Combined, the royalty, Hope Downs and Roy Hill mean that Mrs Rinehart’s share of iron ore profits should hit $US3.44 billion a year, and any private business earning profits at that level could be easily sold for $US34.4 billion (or $A37.4 billion on conversion at current exchange rates).