In his history of Rottnest Island, Laurie O’Meara looks to how the popular holiday destination’s future can be settled. 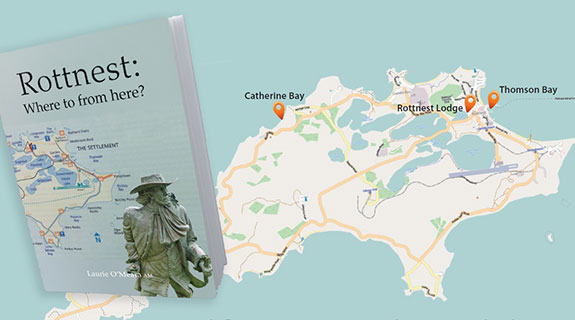 In his history of Rottnest Island, Laurie O'Meara looks to how the popular holiday destination’s future can be settled.

Regular readers of this column will know of my fascination for Rottnest Island, a family favourite annual holiday destination that usually provides plenty of food for thought, and a column or two.

Over the years I have been critical, full of praise, and completely obtuse in terms of writing about Rotto.

It’s always nice to know someone is taking notice, so it was with some amusement I found my thoughts on the island’s modernisation earning a brief mention in a new book, Rottnest: Where to from here?, by tourism industry guru Laurie O'Meara, who was on the resort’s governing body, the Rottnest Island Authority, for 12 years, including eight as chair.

His book is a very broad work covering the island’s history, including periods as an Aboriginal prison, its use as an internment camp during two world wars, a key role in Fremantle’s defence, and even various efforts to subdivide it, initially for land development.

This history covers the island’s governance, including many the characters associated with the island. Often, because it was used as an official summer retreat by a significant contingent of the state’s governors and their officials, the names of those involved read like a who’s who of those who shaped Western Australia in its first century of European colonisation.

The book, launched last week, also covers Rottnest’s extensive use as a holiday destination – both official and unofficial.

Most interesting to me is the colourful business connections to the island, especially those of the modern era. There was Jimmy Woods, the owner of Woods Airlines (eventually shut down by the authorities in the 1960s), and Jack Turner, the ferry owner who was found dead of a heart attack near the scene of a failed sabotage on an opposition vessel.

And let’s not forget the heady days of the 1980s. The book is littered with numerous vignettes from a period now known for the murky depths of WA Inc past. In that time, the island’s board was overseen for a period by premier and tourism minister Brian Burke and, after him, businessman Dallas Dempster, the board’s first chair of the RIA’s predecessor, the Rottnest Island Board, who was not a state minister.

Older readers will recall the controversies around the demolition of a reef to widen the entry to Catherine Bay for bigger pleasure craft, namely that owned by the late merchant banker Laurie Connell. He also earned adverse media attention by being the only private citizen to take up an offer to pay for the renovations of a Rottnest chalet in return for certain exclusive use of the accommodation for a few years.

Entrepreneur Alan Bond also generated significant attention around that time when he secured a 35-year lease to the Rottnest Lodge.

There’s a lot of fun in these stories, but I believe they are only a backdrop to the true issue the author seeks to highlight with the publication of this book.

Mr O’Meara bemoans the long-term lack of progress in fixing up the island’s dated infrastructure, which, despite five serious reports since the early 1970s has received little attention. He believes this is due to the island’s governance structure, which leaves it with all the challenges of a remote regional location without being considered one when it comes to government policy.

He also acknowledges the dichotomy of views on Rotto – those who want it to be frozen in time as some form of museum of egalitarian nostalgia, while others want to develop this rare holiday paradise on the doorstep of a modern city.

Mr O’Meara is critical of 1980s Liberal opposition leader Bill Hassell, for many years a lone voice on the dangers of what became WA Inc. Mr Hassell used the redevelopment proposals in the 1984 Parry and Rosenthal report to savage the Burke government.

Perhaps, in isolation, it was unfortunate to opportunistically use such a report for political purposes, but Mr Hassell was within his rights to beat Mr Burke with anything he had.

Furthermore, as the anecdotes above highlight, there was every chance the legitimate intentions of that Rottnest plan would have been subverted by the murky players of the WA Inc era.

The great regret is that concern about unfettered development on Rottnest was cemented hard in that period. And no matter how much time goes by, how many new plans are created, or how much transparency is improved, the island remains stuck fast by political indecision.

For those who want to purchase it, you can find the book here: http://www.trybooking.com/KBYX

Listen to a podcast interview with Laurie O'Meara at https://www.businessnews.com.au/article/Rotto-s-last-resort