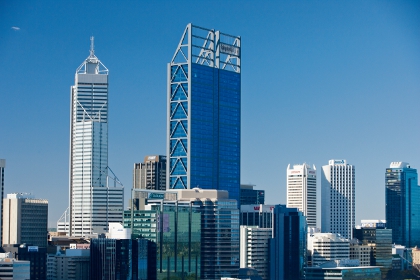 Perth is Australia’s second fastest growing city, behind only the Gold Coast, but the new housing sector is not keeping up with demand, according to a new report.

The city’s occupancy rate was 2.75 people per dwelling in 2011, while 9.12 per cent of Perth dwellings were vacant.

The report also showed Perth hotels have average occupancy rates of 85 per cent, which is forecast to grow to 89 per cent by the end of 2014.

Sea levels on the Perth coastline are rising at three times the global average, the report also found.

In a statistic that federal Infrastructure Minister Anthony Albanese described as "disturbing" and "extraordinary", readings since 1993 have indicated sea levels are rising by between nine and 10 millimetres per year.

The global average is around three millimetres per year.

With temperatures rising and rainfall falling, environmental changes are having little effect on the numbers of people moving to Perth.

That expanding population was having little impact on transport habits, with almost 80 per cent of people still travelling to work by car and only 12 per cent by public transport.

Perth also has the lowest proportion of people walking to work of Australia's capitals, with only 2.6 per cent of people leaving their car or bike at home.

In 2011, Perth also experienced 50 days over 35 degrees, which was the peak of a three-year spike in temperatures.

Perth mayor Lisa Scaffidi said the report highlighted major issues the city would deal with in the next decade.

"The worsening traffic congestion we are experiencing should act as a wake-up call to us all," Ms Scaffidi said.

"And of particular concern in the State of Australian Cities report is the observation that Perth has experienced a reduction in average annual rainfall between 1952 and 2011, so obviously we all need to be smarter in terms of building design and water efficiency."

The report said the gap between population increase and housing supply had reached its highest level in a century.

Despite this, the report found Australians are building the largest houses in the world.

The report highlights a decline in the number of new housing lots being produced, particularly in Sydney.

The new houses being built, however, are possibly the largest in the world, eclipsing the US, though the report says there has been little or no growth in their size for a decade and the number of units has fallen.

"I think too often these issues have been impeded by local or state governments failing to take those (environmental) interests on," he told reporters in Melbourne this morning.

"We need to have a debate about these issues (of housing density).

"There is of course a role for greenfield development, but we need appropriate densities, particularly around transport corridors."

Mr Albanese said it would take "courage" from governments to take on environmental interests standing in the way of developments.

The report found the outward spread of major cities is putting pressure on fresh food production at urban fringes, and that some cities face an increased risk of bushfire damage because of climate change.

It says morning travel peak periods in capital cities have significantly increased in the past 30 years, putting pressure on public transport networks.