Perth’s Pawsey Supercomputer is supporting scientific research into quantum computing and will soon process data from the world’s biggest telescope. 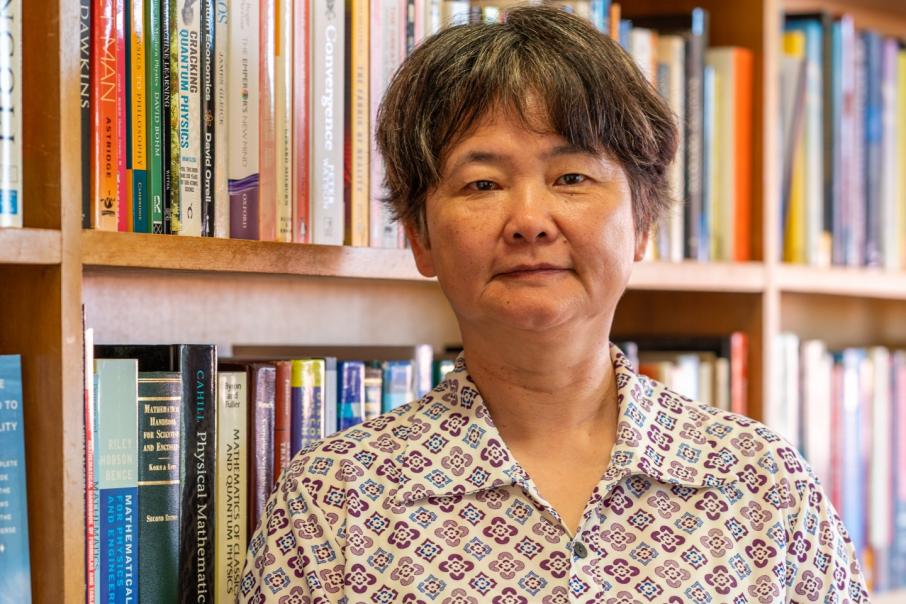 The University of Western Australia’s Jingbo Wang has joined scientists around the world on a voyage of discovery at the vanguard of quantum computing.

“All my life, all my [motivation] is to explore the unknown,” Professor Wang told Business News.

“That part really excites me.” Professor Wang has been a pioneer in aspects of quantum computing and has been a world leader in demonstrating the ability of the emerging field to solve problems.

Quantum computing potentially offers a substantial advantage over even the biggest existing supercomputers.

The science uses quantum mechanics, where particles can hold multiple properties at the same time until they are measured.

The quantum computers use qubits.

Qubits can represent more states than a classical computer’s bits, which are only on or off.

A small number of qubits can explore an enormous range of pathways to find solutions to complex problems much faster than a traditional supercomputer.

The difference can be significant. Finding one item in a list of 1 trillion, if each item takes 1 microsecond to check, would take one week with a classical computer or only 1 second with a quantum computer, according to IBM Australia.

There’s a long way to go before quantum computing becomes widespread, however.

Already pharmaceutical companies and banks have recognised the benefits, with cryptography and code-breaking another potential use.

Woodside Petroleum has a small team of people in Perth learning quantum programming and has a partnership with IBM to use its quantum network.

In that case, it could be used to assist with predictive analytics at the company’s big oil and gas processing operations.

Professor Wang has used a quantum emulator at the Pawsey Supercomputer in Bentley for her research, and new quantum computing kit is being installed in the facility.

“Our research is trying to develop quantum software for the future quantum computer,” she said.

“There’s a lot of discussion, a lot of hype, a lot of enthusiasm around.

“What a quantum computer can do is still in its infancy.

“With classical computers, there are millions of software [programs], we don’t have that at all in the quantum domain.

“Our process is to explore the possibility.”

Her research team has developed a code compiler and optimiser for quantum computers, which can map an algorithm to a quantum circuit.

That will help researchers implement quantum algorithms in laboratories.

An algorithm is a set of rules to process information or undertake a calculation.

“For certain problems, even if we build a million Pawseys, we won’t get a solution in our lifetime,” she said.

“The premise and the prospects are just huge, the sky’s the limit.”

But there are big challenges in the physics of quantum computing that make it difficult to scale.

“Uncertainty is enormous in front of us,” Professor Wang said.

“We’re still very much like we were in the 1940s with electronics.”

Sovereign quantum computing capability would have benefits beyond the economic, it said.

“Since 2017, at least five nations have committed to billion-dollar scale quantum technology initiatives or funding packages,” the CSIRO said.

“China is also investing heavily, including a reported $14.7 billion for the world’s largest quantum research facility.

“These national initiatives recognise quantum technology as both a valuable long-term investment and an important sovereign capability due to its potential applications in secure communications and defence.”

Google, Lockheed Martin, IBM, Microsoft and the US government had all given funding support to Australian researchers, the CSIRO said.

In 2018, University of New South Wales professor Michelle Simmons was named as Australian of the Year for her services to quantum computing.

In a very different field of science, Pawsey has been processing data from radio astronomy produced through the Murchison Widefield Array telescope and Square Kilometre Array pathfinder telescope.

Those are precursors to what is next.

WA’s Murchison region will likely soon be home to part of the world’s biggest radio telescope, the Square Kilometre Array.

There will be 131,000 antennas in WA’s part of the array, capable of sensing incoming radio waves from 13 billion light years away.

Because of the time required for the light to travel that distance, gathering the data effectively represents a look back to the beginnings of the universe.

The SKA will be a €2 billion project involving 16 countries, with Australia and South Africa hosting the two main sites.

In April, the federal government committed $387 million over 10 years to the SKA’s international consortium, an organisation established by treaty which formally began operations in January.

It is intended the international organisation will approve a construction plan for the SKA by mid-year, with the build to get under way by early 2022.

Tendering will take place towards the second half of this year.

The big telescope will create big data. Partly for this purpose, Pawsey is installing a new supercomputer with about 30 times more power than its existing units, at about 50 petaflops.

To give an idea of the computing power, a person would need to make one calculation per second for 1.5 billion years to achieve what the new supercomputer can do in one second, according to CSIRO.

Perth’s International Centre for Radio Astronomy Research, which is a collaboration of UWA and Curtin University, will be preparing to contract three major components of the SKA project.

Those include: the infrastructure for the SKA low telescope in the Murchison, including signals and power distribution, with the CSIRO; and the signal and time synchronising system for the SKA mid telescope in South Africa.

The third is the data system, which ICRAR has spent five years prototyping and testing.

The Australian SKA telescope will collect huge amounts of data, which will need to be processed in real time through a high-performance computer.

Pawsey will be embedded into the telescope system through a fibre optic cable.

ICRAR executive director Peter Quinn said this would represent a change in the way science was done, because the processing would happen in real time.

Once the data is processed, the next phase will be for it to be analysed by scientists, which is where the Australian SKA Regional Centre will be involved.

The centre will be part of an international network, having secured $64 million in funding through the government’s recent SKA package.

The network will store, publish, and curate data from the SKA.

“There’s enormous amounts of data that someone has to search through to do their [research],” AusSRC director Karen Lee-Waddell said.

The funding for the SRC will help build the infrastructure for scientists to undertake this research and provide the software and human resources to make it work.

“It’s not just computing power and storage we need, its actual algorithms … they don’t always scale up,” Dr Lee-Waddell said.

“Some [algorithms] will scale, but we’re talking about thousands of calculations for a single pixel.”

The big project was also helping bring some of the world’s brightest minds to Australia and developing WA’s STEM skills.

Dr Lee-Waddell said she had come from Canada to be able to work with some of the best telescopes in the world.

“The experience here, it has attracted so many people,” she said.

Another Pawsey user, UWA Associate Professor Michael Wise, is studying the evolution history of SARS-CoV-2, the virus that causes COVID-19.

There is a range of viruses in the beta-coronavirus family, including the viruses which casued SARS and MERS, and about 20 per cent of common cold viruses.

Associate Professor Wise is focused on computational biology and is hoping to uncover the evolutionary links between the viruses.

The protein structure of the viruses are complicated, and there are hundreds of millions of data points involved in the research.

The analysis also needs to be performed repeatedly in order to find which outcomes are most likely.

All of this requires high-level mathematics in the fields of probability and statistics, requiring a huge amount of computing power.

But the research could be highly informative.

While most research under way is analysing the links between different strains of the SARS-Cov-2 virus, this will look over a long-time scale.

That’s because the viruses circulate in species other than humans.

“I need to do a lot more work,” Associate Professor Wise said.

“But my hypothesis is that the coronavirus that causes the cold was distributed by rats, perhaps on ships. The other ones are via bats.”