Workplace injury rates in WA have fallen despite the heavy influx of workers to construction projects. In fact, mining is behind retail trade in terms of injuries. 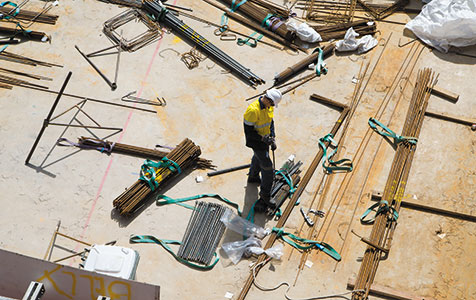 IMPROVING: Despite fewer workplace injuries there is a divergence of opinion about the next step. Photo: Attila Csaszar

Workplace injury rates in WA have fallen despite the heavy influx of workers to construction projects. In fact, mining is behind retail trade in terms of injuries.

Several recent high-profile prosecutions for workplace injury and death have to some degree taken the gloss off a steadily improving safety record in Western Australia during the past decade.

Against this backdrop, and amid the unveiling of draft safety laws by the state government, come statistics from Worksafe indicating that injury frequency rates in WA have fallen more than 30 per cent since 2003.

Manufacturing and arts and recreation services were the two sectors reporting the highest levels of injury frequency, with mining in the middle of the pack behind retail trade.

The Worksafe figures come as the state government released a draft of its new workplace safety laws, which are based on the national model designed under the previous federal government.

Partner at international law firm Ashurst, Marie-Claire Foley, said the model bill was designed to harmonise laws across states, but Victoria and Western Australia were yet to pass the legislation.

She said one major change would be that officers of a company had a positive obligation to prove they had exercised due diligence on safety matters.

“It does mean that officers are going to be very concerned about what steps they should be taking and what their organisation is doing.

“It will certainly elevate safety further into board rooms.”

The state legislation won’t be identical to the national model, particularly entry for safety inspections, which the state government said should be covered under workplace relations law.

The proposed law does have its critics, however, with Mike Goddu of JMJ Associates and Sidney Dekker of Griffith University, who were in Perth to host a series of safety briefings, suggesting the legislation was a step in the wrong direction.

Mr Dekker said the legislation was about being more punitive, whereas the move should be towards performance-based regulation.

“Increasing punitiveness does not support honesty, openness or disclosure,” he said.

Mr Dekker said recent research showed that increasing bureaucracy could inhibit improvements and that the current approach led to blame shifting and creation of paper trails, rather than a focus on positive outcomes.

Both Mr Goddu and Mr Dekker said the benefits from continuing to pursue increasing restrictions and compliance measures diminished as restrictions increased.

The focus should now be to restore fiduciary relationships that were broken, rather than punishing people who made honest mistakes, they said.

Asking what is responsible for a safety issue, rather than who, was more likely to get sustainable results, they said.