SPECIAL REPORT: Business News looks at what’s holding up and what’s contributing to electricity price reductions, reviews the players in WA’s wave energy and waste-to-energy industries and reports on allegations of market manipulation by a Synergy-owned business. 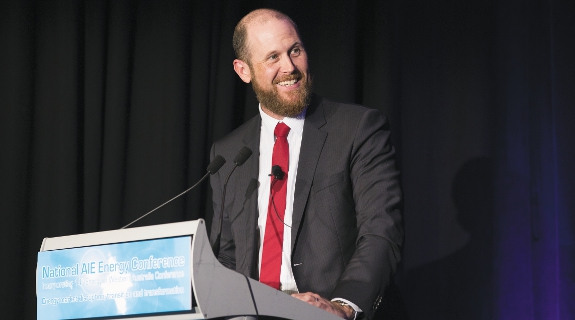 Despite cost cutting in the state’s oversupplied electricity sector, concerns remain about the government’s control over a root-and-branch review of a market in which it is a major player.

Concerns about the dominance of state-owned generator and retailer, Synergy, show no sign of abating, six months after the first major changes to the state’s electricity sector since 2006.

In March, Energy Minister Mike Nahan heralded the beginning of reforms that are expected to overhaul Western Australia’s electricity sector, which operates under very different arrangements to the National Electricity Market (NEM) across the entire eastern seaboard.

The reforms aim to reduce electricity prices and increase competition, however, market participants have complained the state government is conflicted due to the fact it is running the reform while also being the dominant player in the industry, through its ownership of Synergy.

Investigations into the industry are still considering a range of major changes including joining the NEM, which covers every state and territory except WA and the NT as well as considerable reform to the state’s two-tier electricity system.

Under the existing scheme in WA, electricity users essentially pay twice – to the generators that supply the power used (energy market), and for a back-up system (capacity market) that pays separate generators and ‘demand side management’ facilities to standby should extra power be needed.

One recommendation already dismissed by the state government is to split up and sell Synergy, the dominant force in both retail and generation following a contentious merger with fellow state-owned entity Verve Energy.

Despite the government’s position, however, this pathway remains the sector’s preferred option. 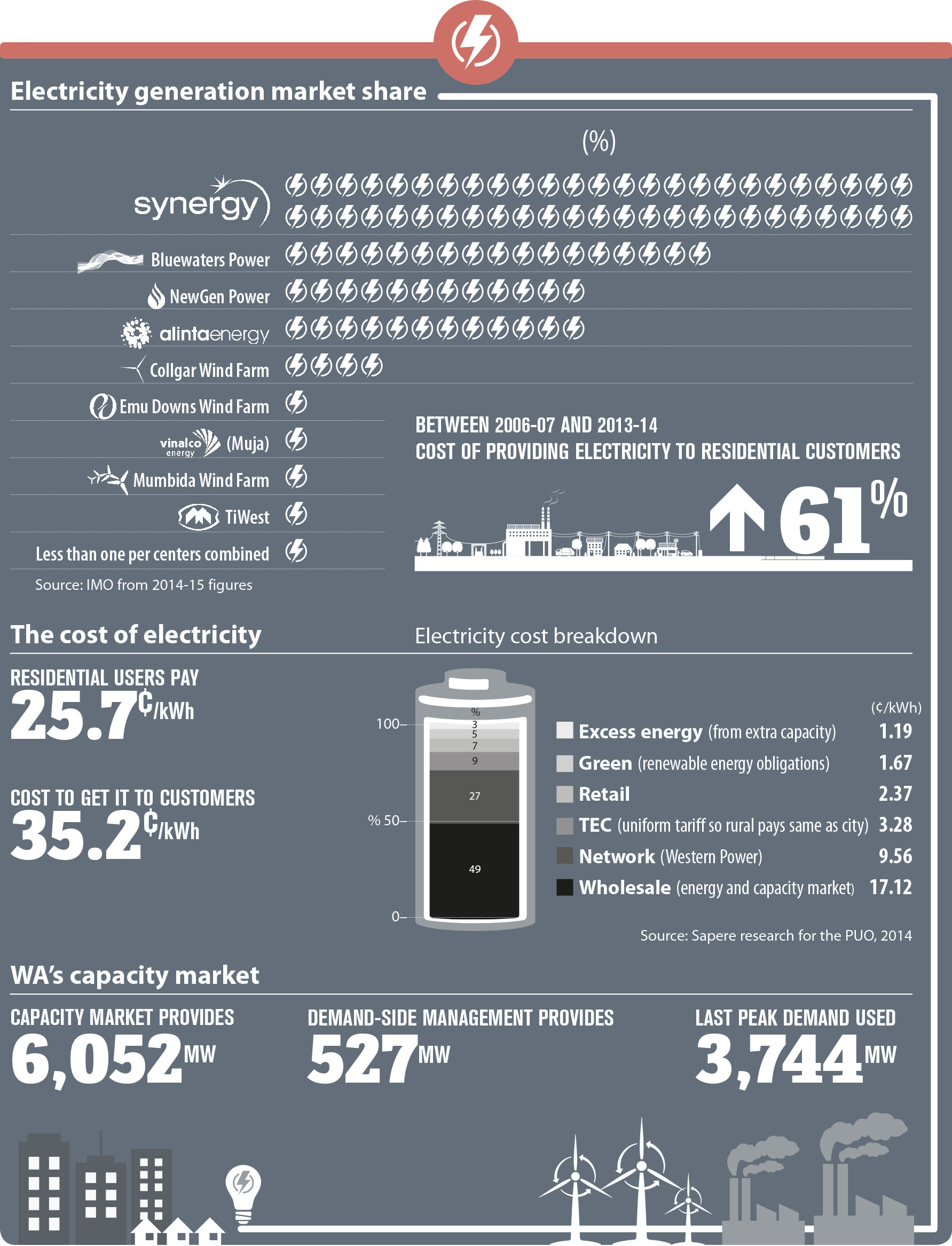 Major changes promised by the state include a pledge to move to ‘full retail contestability’, which will allow retailers other than Synergy to sell power to households and other small energy users from mid-2018.

This change hinges on the state also reducing the current $500 million-plus annual taxpayer subsidy that counteracts artificially lowered electricity bills (see table on the cost of electricity and the breakdown of these costs).

Dr Nahan said that, as part of ongoing market reforms and hundreds of millions in cost cutting at Synergy, the government was on track to reduce the subsidy to zero over the next three years, in time to bring in greater retail competition.

Another change under way is one that could pave the way for more interaction with the NEM.

It involves transferring the regulation of WA’s electricity network, run by Western Power, to the national body, the Australian Energy Regulator.

The first is the ongoing criticism of state ownership and control of the sector through Synergy’s dominance in retail and generation, and Western Power’s 100 per cent ownership of the network.

The second is uncertainty over what potential changes to WA’s massive oversupply of contracted power will look like (see WA’s capacity market figures in the table).

Dr Nahan and others have blamed the price paid for capacity energy as the culprit.

This has led to disagreement between the two parties that contribute to the capacity market: demand-side management facilitators (large users that shut off power when needed), and generators (that fire up when needed).

Ky Cao, managing director of Perth Energy, whose business makes money from having generators within the capacity market, said by targeting only the price paid for capacity the government was missing the true cause of excess.

Mr Cao told Business News demand-side management and Synergy’s behaviour were responsible for the excess capacity and costs in the system.

He said this stemmed from Synergy over-contracting 1,000 megawatts of power, much of which he said was old, inefficient, and unreliable.

“What has also hidden this cost of keeping old plants on the book is the fact that Synergy is allowed to bid into the ... energy market as a portfolio (with) its entire fleet of generators,” Mr Cao said.

“All other participants must bid in by plant. Bidding in as a fleet masks the poorly performing plants.

“Requiring Synergy to bid in by plant like everyone else will reveal which plants should be closed down or mothballed.”

“As with all electricity retailers, Synergy has an obligation to source an amount of capacity that is based on the electricity needs of its customers during peak periods,” Mr Waters said.

He said Synergy retired assets in the best commercial interests of the business, and in the past two years had shut down the Kwinana power station and Geraldton gas turbine.

WA Independent Power Association chairman Richard Harris told Business News that, until a lower price was set for capacity payments, Synergy and others would not have an incentive to shut down old, inefficient plants.

He said Synergy’s dominance in the market was still causing unease.

While Mr Harris complimented Synergy on its drive to cut costs, he said there were concerns Synergy was seeking to increase its market dominance in the contestable retail market.

While Synergy has reduced market share based on its own assets – to 55 per cent today compared with 86 per cent in 2006 – in conjunction with power purchase agreements, it controls about 80 per cent of the generation market.

“As an outcome of these reforms, we do want to see a slimmed down Synergy,” Mr Harris said.

“We didn’t get Synergy being split and sold ... we’re concerned that Synergy isn’t allowed to grow and become absolutely massively dominant in the market.”

“The risk emerging from the review is that Synergy will become even more dominant, as the government uses policy and regulation to stymie the private sector,” Mr Wilson said.

“This will raise electricity prices and cost businesses and consumers.”

Dr Nahan rejected the claims, telling Business News Synergy was not trying to increase its market dominance. Instead, he claimed Synergy was in some instances losing out to other players within the contestable market.

Mr Waters said allegations Synergy was seeking to increase market share were nonsensical and without foundation.

However, just as Dr Nahan butted heads with Premier Colin Barnett last year when he went off-piste and said he wanted to see Synergy split up and sold, Synergy has also argued for its own carve up.

In its submission to the discussion paper on the electricity market review, Synergy argued for the “appropriate structural separation of its business”.

Whether this will happen eventually remains to be seen, but Dr Nahan told Business News the latest decisions on WA’s electricity market structure, including announcements on the capacity market, would be rolled out over the next six months.

“Some of them will take time to implement but the announcement and decisions will be within the next six months,” Dr Nahan said.

Mr Harris, who is also a director at WestGen, which plans to build a 40MW biomass plant in Manjimup and a 30MW solar plant near Byford, said a key market reform he wanted to see was the transfer of risk for new projects to proponents; this would encourage new investment, particularly in renewable energy, and increase competition.

“At the moment the risk is on Western Power, and being government owned they’re conservative and cautious and it takes a long time (for them to provide access),” Mr Harris said.