If the GST rules are not changed, WA risks perpetuating its status as a cash cow propping up inefficient east coast manufacturers and retailers. 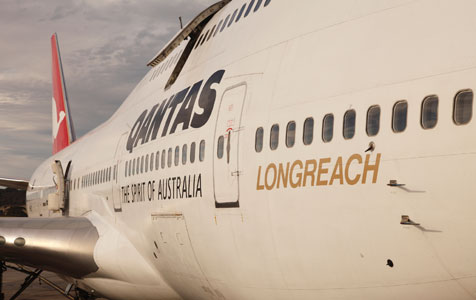 The request from Qantas for financial assistance is another example of the hand-out mentality which has developed in eastern Australia.

It’s not often that thinly populated Western Australia holds two aces in its perpetual game of financial poker with the politically more powerful eastern states and the Australian government.

However the looming re-run of the Senate election here, and demands from other states for an increase in the Goods and Services Tax on overseas purchases, means that WA is of added importance to Canberra as well as the manufacturing states of NSW, Victoria and South Australia.

The Senate election is critical for the prime minister, Tony Abbott, if he is to win control of that chamber in the national parliament, meaning that now might be a good time for Canberra to pay more attention to WA.

The GST situation is even more interesting, because the manufacturing states are clamouring for a change to the tax as a way of raising extra revenue.

Given that WA does not have a big manufacturing base, there is not a lot to gain by agreeing to the GST changes – unless there is also a change in the way GST revenue is allocated and WA gets a fairer share of what’s raised.

It’s a difficult point to prove but it seems likely that lowering the GST threshold from its current $1,000 on overseas purchases would have a disproportionately negative effect on WA while protecting inefficient eastern states manufacturers.

What the other states want with the proposed GST change is the equivalent to re-erecting a form of tariff protection of the sort that propped up high-cost industries such as carmakers for decades.

Admirable as it might be to have an Australian car manufacturing industry, it is decades since there was any benefit in it for WA – though taxpayers here have been forced to continue providing handouts to foreign carmakers with factories in Melbourne and Adelaide.

Another example of the handout mentality that has developed in eastern Australia is the request from Qantas for financial assistance. Given that the airline has severely pruned its international services out of WA, it’s reasonable to assume that any taxpayer help will go into states other than WA.

And then is the request from the fruit and vegetable processor SPC Ardmona, which is arguing that it, too, is a special case and needs a $50 million handout to prop up a failing operation based in the Victorian country town of Shepparton.

If the world were a kinder and gentler place it would be lovely for governments to dish out taxpayers’ funds to everyone who asked for a helping hand.

Unfortunately it’s not a nice world, which is why WA was forced in the 1960s to dig itself out of a deep financial hole by encouraging the development of its mining and oil industries. Over time these have become world-class businesses that rarely require any government assistance – though the occasional royalty discount helps.

The rest of Australia, foolishly as can now be seen, imagined that tariff protection and other forms of government assistance could maintain manufacturing industries that were demonstrably uncompetitive in a globalising world.

Worse still, the previous federal government thought it could extract more tax from WA via its mining super-tax in order to expand its artificial life-support mechanism for failing manufacturers in Sydney, Melbourne and Adelaide.

It also thought it smart to encourage a system that extracts an unfair slice of GST revenue to prop up states that have done nothing to encourage their own globally competitive industries.

WA is the region of Australia most intimately linked to the rest of the world. Quite simply, we are plugged in, generating the lion’s share of the country’s export revenue because we have competitive industries.

Being internationally focused also means many people here are happy to do some of their shopping in the international market because the goods are often better, the service often slicker, and delivery often faster.

Lowering the GST threshold is a proposal being pushed by retailers and manufacturers who cannot compete internationally, something they must learn to do or risk travelling the same road as the failed domestic carmakers.

The GST debate is providing WA with a lever to demand fairer treatment and avoid the likely crisis should this state’s share of the tax drop to the forecast 9.2 cents for every dollar generated by 2017, rather than the $1-for-$1 once promised.

While tempting to use the proposed GST change as a way of lecturing other states about the importance of encouraging the development of globally competitive industries, there might be more to gain by agreeing; but only if the revenue-sharing rules are changed at the same time.

If the rules are not changed, WA risks perpetuating its status as a cash cow – propping up inefficient east coast manufacturers and retailers.