Lifting national productivity is a goal that is universally supported, but it seems our leaders in Canberra either haven’t really thought through what it means in practice, or just don’t care. 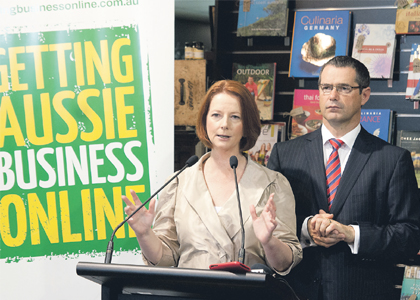 Lifting national productivity is a goal that is universally supported, but it seems our leaders in Canberra either haven’t really thought through what it means in practice, or just don’t care.

IT’S an easy line to drop into a speech or media statement -“Australia has to be more productive and efficient”.

Politicians of all persuasions have used this line, to the point where it has become a motherhood statement.

And it has done so in a way that is at odds with some of its key reform goals.

One week ago, Environment Minister Tony Burke announced the federal government would get more involved in the approvals process for coal-seam gas and coal mining projects.

The stated goal was to protect water supplies, and the move was championed by independent MP Tony Windsor.

Amazingly, Mr Burke claimed that this would not add another layer of regulation, and would not slow approvals for new projects.

Yet it flies in the face of widely supported moves to reduce regulatory overlap between Canberra and the states.

Our political leaders have rolled out grand phrases like ‘cooperative federalism’ and professed their support for more streamlined approvals processes, yet examples like this show how easy it is to backslide.

Planned changes to the 457-visa program are another example.

In a speech to the ACTU congress last week, Prime Minister Julia Gillard laid the groundwork for increased regulation of skilled migration.

She spoke alarmingly about foreign workers taking jobs ahead of Australians, and claimed the IT industry was riddled with rorts in its use of foreign labour.

Nowhere in her speech did she acknowledge the flexibility and efficiency that comes from having access to overseas workers.

The government followed up this week with the announcement that the Fair Work Ombudsman would be given new powers to monitor and enforce compliance.

Yet it has done this without consulting the Ministerial Advisory Council on Skilled Migration - the business group that was set up for the express purpose of advising on these matters.

The government’s supporters would argue that, if the business sector was doing the right thing, why should it be worried about this change?

A better question is this: if the government hasn’t substantiated a real problem, then why do we need more regulation?

A third initiative was the prime minister’s support for enshrining penalty rates in awards, a move designed to help what she called the two million “insecure” workers in Australia.

One again, the government is assuming there is a problem and that more regulation is the best solution.

Ms Gillard’s focus was on the ‘rights’ of casual and part-time workers, but no consideration was given to the cost of this change.

It may be simplistic to say “higher wages equals less jobs” but that is the reality facing most businesses in sectors like hospitality, retail and tourism, which are looking to employ more low-skilled people on weekends or out of normal hours.

A fourth example was Communications Minister Stephen Conroy’s proposed media reforms, which include the appointment of a new government regulator to oversee the industry.

This gave rise to some rather extraordinary ‘double speak’, with the prime minister saying she supported industry self-regulation, but in the same breath that the government needed to have oversight of the process.

How is that self-regulation?

In all of these areas, political analysts have had a field day speculating on the government’s real motivation.

It is widely, if not universally, accepted that the prime minister is seeking to shore up support among key independent MPs and in Labor’s union heartland.

That is not the path to higher productivity.