Podium Minerals has upped the ante at its Parks Reef platinum group metals project in WA, having secured a government grant to co-fund the drilling of two holes to test for continuity of the existing mineralisation at depth. The holes will be drilled to more than twice the depth of any previous drilling at the deposit with a third hole also on the cards. 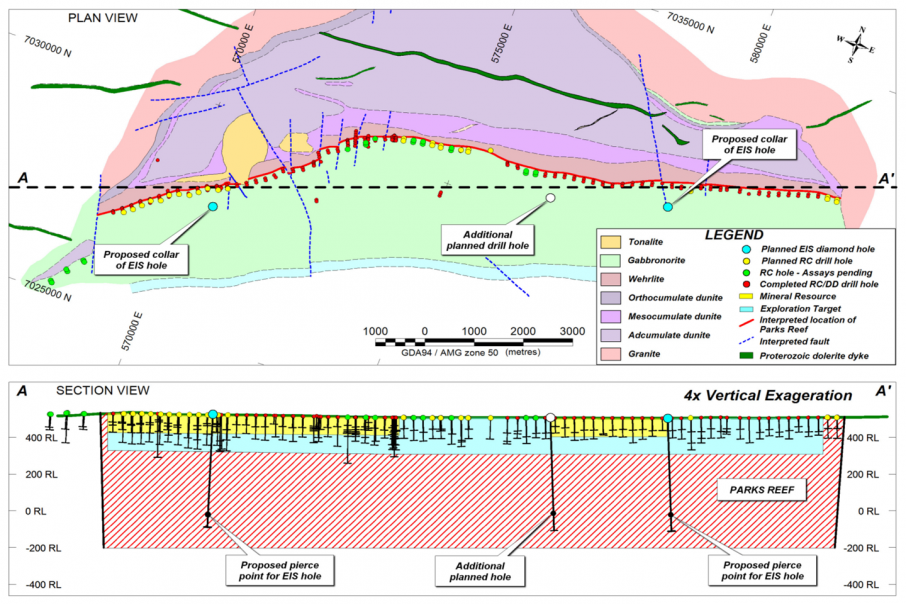 Podium Minerals has upped the ante at its Parks Reef platinum group metals project in WA, having secured a government grant to co-fund the drilling of two holes to test for continuity of the existing mineralisation at depth. The holes will be drilled to more than twice the depth of any previous drilling at the deposit with a third hole also on the cards.

Parks Reef already boasts an impressive 1,390,000 ounces of combined platinum, palladium and gold together with base metal credits for 53,900 tonnes of copper within the project tenure in the mid-west region of WA.

The existing resources stretch over 8.5km and dip to a maximum depth of 100m along the reef that extends for 15km of total strike length.

The rods are already turning at the project as Podium looks to define continuity of high-grade zones of PGM mineralisation. Results of the ongoing drilling campaign are pending in anticipation of a mineral resource upgrade due to be released to market in the coming weeks.

The company is looking to unlock further value at the project having secured the government grant to drill two holes at Parks Reef to 750m depth. The holes will aim to test continuity of mineralisation at around 520m below surface.

$150,000 has been awarded to Podium under the WA Government’s Exploration Incentive Scheme that has been instrumental in supporting exploration companies pursuing new mineral discoveries in the state – particularly those lurking at depth.

Around 50 per cent of the drilling costs of the 2 holes will be covered by the grant, whilst a third deep hole not included as part of the grant is also on the cards at Parks Reef.

“The Company would like to express its gratitude to the State Government in particular the Minister for Mines, Industry Regulation and Safety for selecting Podium as a suitable applicant and for the financial assistance to drill an exciting new dimension to the Parks Reef PGM project.

By successfully intersecting the reef at such depths would clearly demonstrate the vast dimensions of the mineralised horizon and any variability in PGM grades and may provide invaluable vectors toward higher grade sectors along the extensive 15km PGM strike length of the reef”.

Podium is looking to better develop the interpretation of the intrusive complex at depth and to define the continuation of grade and thickness of the reef at deeper levels courtesy of its drill campaign.

The drilling will also look to enhance the understanding of the magmatic stratigraphy of the lower section of the mafic zone.

Intriguingly, Podium says the campaign will also test for high-grade reef style mineralisation in the hanging wall mafic stratigraphy, similar to the mineralisation at the renowned Merensky and UG2 reefs located at the Bushveld Complex in South Africa and the J-M reef located in the Stillwater Complex in the US state of Montana.

Drilling of the deep holes will test around 450m of the mafic stratigraphy and is projected to commence in July.

Podium aspires to become Australia’s first PGM producer and things are looking good at Parks Reef with the project continuing to be peppered with drilling and a resource update due just around the corner. The company will likely be holding its breath as the drilling at depth looks to deliver a potential wealth of PGM mineralisation yet to be discovered.