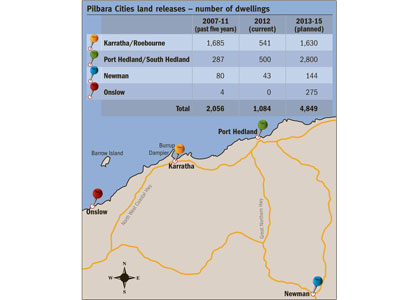 The state government plans to release land for 4,849 new dwellings across the Pilbara by 2015 to cater for increasing demand for housing in the region and to improve affordability.

The number of dwellings in the major centres in the north-west is projected to soar in 2013-15 from a much slower 2012 as more land is released.

This follows a period of stronger growth in dwelling development in most centres over the five years to 2011.

Population growth has been a major driver in land development in the Pilbara, with Karratha and Port Hedland both expected to reach 55,000 residents in the next 25 years.

The state government established the Pilbara Cities program to facilitate what was needed to cater for the forecast growth.

Mr Adams said that since lands minister Brendan Grylls took over the portfolio, the focus had been on creating normality in the land development market to speed up the process of development and create more diversity.

“Up until two or three years ago, the only land developer in the region was the state government, primarily through Landcorp but also through the department of housing,” Mr Adams said.

“That is not a normal situation so, through the Pilbara Cities program in conjunction with Landcorp, we have been actively trying to normalise the land development market so people have choice.

The government has been constrained in its ability to release land in the past because of native title claims and lack of access to services such as water and sewerage.

But, according to Mr Adams, these constraints have eased in recent times.

“A lot of time and effort have gone into getting these constraints out of the way, so we are really confident that land availability won’t be the major issue going forward,” he said.

“The bigger challenge will be getting enough builders to the region to actually build on all the land that is available.”

Port Hedland and South Hedland have experienced relatively low land releases since 2007 compared to plans for the next three years. From 2007-11 only 287 dwelling sites were released (175 lots) and in 2012, 500 dwellings (eight lots) will be released.

Mr Adams said native title had been a major constraint to development in the region until now.

“The primary constraint for land development in South Hedland has been native title. In October last year Mr Grylls signed a letter of agreement with traditional owners resolving native title around 1300 hectares around South Hedland,” he said.

In Karratha, the government has focused on other opportunities like infill development to attract a diverse range of developers with smaller lots.

“Of course, you also have the larger developments like the Mirvac one at Mulutaga which is 168 hectares. So it is about providing that choice,” Mr Adams said.

According to the department of regional development and lands, 11 of the 32 Karratha landholdings for development between 2009 and 2014 are privately owned, compared to 20 out of 36 in Port Hedland and five out of eight in Newman.

Mr Adams said 93 per cent of land in the Pilbara is crown land and the focus is on improving freehold ownership in townships.

“Our aim is to create affordable living in the Pilbara. At the moment it is clearly difficult for people to relocate when housing costs are high and purchase costs are very high,” he said.

In recent years, property has delivered a 20 per cent year-on-year capital growth in some cases in Pilbara markets and 11 per cent rental yields, which is driven by the low 34 per cent rate of owner-occupiers. The government is aiming to nearly double that in the next few years.

Managing the conflicting interests of land developers and investors who are looking for good returns and the population looking for affordable housing can be challenging, according to Mr Adams.

“It is challenging, because we are definitely trying to decrease housing costs,” he said.