Finbar Group has gained planning approval for a new apartment project that combines a 38-level tower with restoration of two former ABC buildings on Adelaide Terrace. 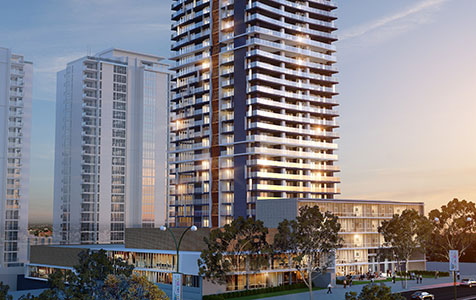 Finbar Group has gained planning approval for a new apartment project that combines a 38-level tower with restoration of two former ABC buildings on Adelaide Terrace.

Finbar announced late on Friday that it has received approval from the City of Perth’s Development Assessment Panel (LDAP) for the project, which will complete the redevelopment of the former ABC site.

It has substantially reworked the project since then, increasing the number of apartments and the height of the new tower while also integrating the heritage buildings into the development.

With an estimated $220 million end value (up from $175 million last July), the Concerto project will be Finbar’s largest.

That will include 17 studio and one-bed apartments in the former ABC administration building, which will also become an entry to the apartment tower.

Finbar had argued last year it was not feasible or prudent to restore or retain the administration building because of the significant works and cost required to bring it up to current health and safety codes.

As a trade-off, the developer had proposed conserving the ABC studio building and gifting the studios for WA's performing arts and music community to use.

That plan has also changed, with Finbar now seeking commercial uses for the 3-level building, which will be subdivided onto its own title.

Finbar said it is already in discussions with interested parties seeking various commercial uses for the studio building.

The centrepiece of the project will be the Concerto tower, which will have 209 apartments.

It will be the third tower on the site, which is being developed by Finbar and its joint venture partner, Singaporean company Ventrade Australia.

They have already completed the 23-level Adagio tower and are currently building the 22-level Toccata apartment project, both fronting Terrace Road.

Finbar has also developed the 27-level Fairlanes building on a neighbouring site.

“Whilst the former studios will be on a separate title to the new development, we will be working very hard to make sure that the ultimate use respects its heritage but also complements our development plans next door and the East Perth area as a whole,” he said.

“We believe that this outcome is the best result for all involved and one that we will be very proud of in years to come.”

Finbar said it would immediately start work for a marketing launch in July 2014 with a view to gaining sufficient sales to enable commencement of construction early in the 2015 calendar year.