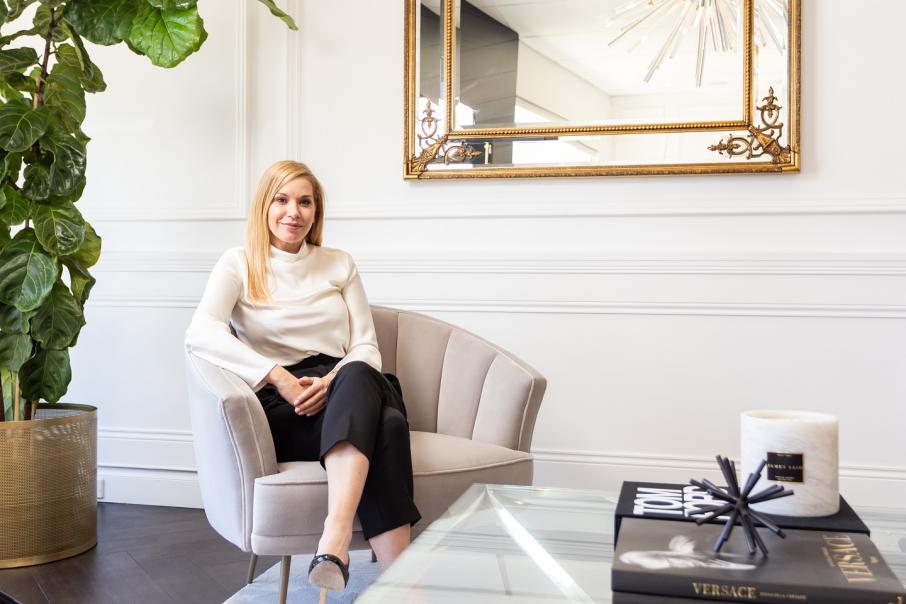 Bethany James says the new store presents her vision of how the shopping experience should be. Photo: Gabriel Oliveira

James Said founder and managing director Bethany James said the business she started in 2012 was first and foremost an online store, but the galleries (stores) allowed customers to browse the products and the style they were after.

“The galleries are places where you can do a bit of a sampling and touch and feel and understand the quality of the pieces,” Ms James told Business News.

Customers then make selections at the ‘browsing bar’, a set of computers at the back of the store where they can browse the online catalogue and put together looks with interior designers.

“We would select the products for the bedroom and then one of our tech staff would put together mood boards in real time; that would come up on the computer so then you would be able to see the room coming to life,” Ms James said.

She said the business started as a distributor, Regency Distribution, selling furniture directly to interior designers, and had grown to sell products online and instore to the public, with annual sales of $8 million.

With the Melbourne store’s recent opening, Ms James said sales could be pushing $12 million in the next 12 months.

James Said is not Ms James’ first business project, having launched Bethany Cosmetics in 2002 and achieving sales to the UK and Japan, as well as nationwide across Australia through Myer and Target stores.

She was recognised with a 40under40 award in 2004 for the brand’s success.

Ms James left Bethany Cosmetics in 2008 and pursued a career in interior design, which eventually led her to James Said.

The new business opened its first store, in Nedlands in 2016 and a second opened in Sydney in 2018.

With a restaurant, concierge and interior designers instead of sales staff, Ms James said she wanted the Melbourne outlet to provide a unique retail experience.

“You can order food anywhere in the store so you can eat in the restaurant or you can sit up here at the browsing bars,” Ms James told Business News.

“You can order a glass of wine, a cheeseboard and you can be served up here; hubby can read the paper and have a beer if he wants to.

“We really want to encourage people to feel welcome, to feel relaxed and make use of the talented designers that we have.”

Ms James said she hadn’t originally sought out a space as large as the new 1,400 square metre Melbourne store, but the 1920s theatre became available and matched the brand.

“What we sell is mid-century furniture that’s been reproduced with a modern twist, so given our furniture has this nod to the past it really just matched our brand,” she said.

Ms James said she had learned not to pay attention to what other people were doing or what trends were popular in a certain city or with a competitor.

“Every time I would look at what other people were doing and I would emulate that I would be unsuccessful, so I’ve learned my key to success in this business has been to be 100 per cent authentic,” she said.

“I sell products that resonate with me and that I feel passionate about … I’m not influenced by a city’s certain style.

“Melbourne and Sydney do have completely different styles but we haven’t changed who we are – we are 100 per cent ourselves.

“We look different to other businesses, we act different, we really are just running our own race and doing our own thing and I think that’s the key to our success.

“So when people walk into a James Said store it feels fresh and it feels unique.”

Starting with one staff member in 2012, Ms James said the business had grown to employ 14 staff, six based in Western Australia.

Despite a lot of business being generated on the east coast, Ms James said she would keep her business headquartered in Perth because this was where it began.

However, said she was cautious about opening another store.

“At the end of every shop fit I always say ‘no, no, this is enough’ but the pattern seems to be every 12 months I get itchy feet and want to do another one,” Ms James said.