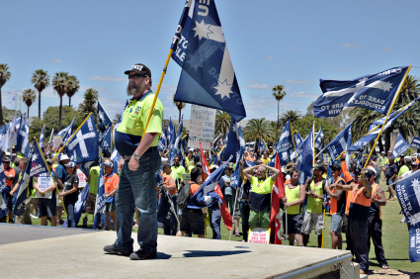 The Construction, Forestry, Mining and Energy Union has been fined more than $8500 in penalties by the Federal Magistrates Court for making misleading statements regarding workers obligations to join the union.

The ruling comes nearly four years after CFMEU organiser Walter Molina told employees of a contractor working on the Coles-Myer Distribution Centre building site at Perth Airport that they could not work on the site unless they became union members.

Mr Molina also told the contractor’s industrial relations manager that the employees could not return to the site unless they signed up to the union.

In handing down his ruling Federal Magistrate Lucev said the union had not expressed contrition and had failed to take any corrective action.

“Corrective action was peculiarly within the union’s capacity to implement, and it has failed to do so,” Magistrate Lucev said.

“Moreover, the union’s submissions at the penalty hearing that there was no need for corrective action compounds the union’s failure.

“Furthermore, the fact that the contravention has occurred, albeit in circumstances that it did, but that the union has not taken, and sees no need for, corrective action, manifests an attitude indicative of a lack of concern about ongoing disobedience to workplace relations legislation.”

Australian Building and Construction Commissioner Leigh Johns said the ‘no ticket, no start’ policy promoted by some union members was out of date.

“Every Australian worker has the right to choose whether or not to join a union and they should be able to go about their work without being pressured one way or the other,” Mr Johns said.

“Union representatives are permitted to inform workers about the benefits of joining a union but a legal line is crossed if they tell workers they have to sign up as a condition of working at a particular site, as occurred in this instance.”