Daniel Pano and his family are looking to replicate the success of the original Rosso Espresso in their new venture. Russell Quinn reports. 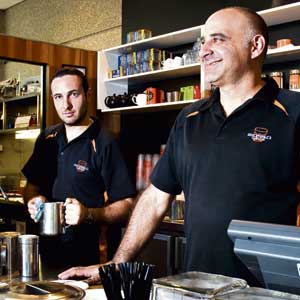 THE Pano family, which owns St Georges Terrace cafe Rosso Espresso, has opened up a second Rosso-branded cafe only a stone's throw away from the first - and business is already booming.

In fact, takeaway coffees were running out the door before the fit-out was finished at the new premises, in the foyer of the AMP Building at number 140 on the terrace.

Daniel Pano, his father, Gabi, and cousin Marwan have been going through as much as 35 kilograms of coffee a week from their new cafe during the past two months.

That's quite an accomplishment, considering they were scheduled to move into the location a little over a fortnight ago.

"AMP, through Colliers (the building manager), approached us and asked if we would be interested in setting up some sort of temporary coffee cart because everyone knew that Rosso was coming and was looking forward to it, and didn't want to wait for us to finish the shop fit," Mr Pano told Gusto.

"We had two metres of bench space, so I got a machine in straight away, brought the grinders in that weekend, bought a temporary display fridge, bought milk and coffee and started making coffee from day dot."

The family bought the original cafe at 89 St Georges from Micahel de Marte more than three years ago.

"We saw Rosso, we liked it, we did our homework and we thought it was the right business for us and we went from there," Mr Pano says.

"To get into that you've got to be confident, you can't buy a business that was one of the best at that time because you've got more to go down than up.

"But we were confident.

"My dad taught me how to make coffees, we didn't go to coffee school and no-one's got more experience in the food industry than my dad, not that I know of anyway."

Mr Pano is referring to the past nine years during which his parents ran Primo Café in East Perth, which followed his father's 20-year stint at the helm of a cafe-cum-deli in Riverton.

This vast experience fuelled ideas to improve what was already a very successful coffee shop, despite the high levels of staff turnover.

"If the owners aren't there busting his chops, do you expect the staff to do it?"

Recruiting quality staff and then leading them through hard work wasn't the only measure implemented.

"When we bought the business they had just started printing one size of their cups, which is a big step for a small operator," Mr Pano says.

"We then took it to the next level and got all three of the sizes.

"We've gone the next step again and getting all your bags and serviettes printed, so we're trying to compete now with the bigger players, but still be a family business."

But the greater challenge came in managing people's expectations after taking over a popular CBD cafe.

"It's hard for customers to give it a go, especially establishing a name when there's one already there, but you've got to sit and say well, 'you give it a go and let me know, good or bad, I'm happy to take both'," Mr Pano says.

He cites good customer service and top quality produce as the core elements for success - as illustrated by doubling the trade at the first cafe, which now sells 70 kilograms of coffee a week - and firmly believes ideas like loyalty cards are over-rated.

"No point paying for nine bad coffees to get one free bad coffee," Mr Pano says.