A Nedlands-based tech startup that is aiming to raise $15 million next year has been chosen as joint winner in global finals for international startup competition Pitch@Palace at St James’s Palace, London. 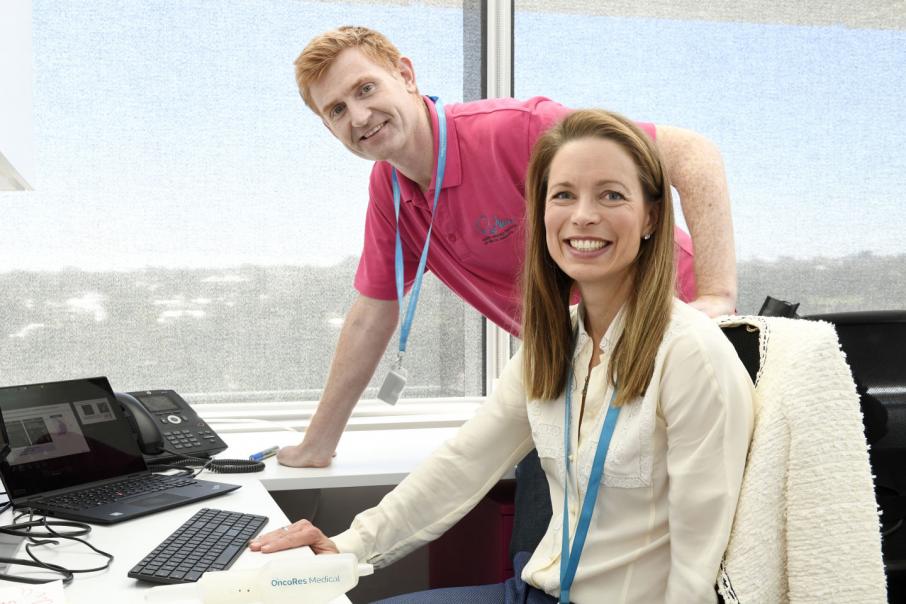 Brendan Kennedy, Katharine Giles and the OncoRes Medical team are the joint winners of Pitch@Palace.

A Nedlands-based tech startup that is aiming to raise $15 million next year has been chosen as joint winner in global finals for international startup competition Pitch@Palace at St James’s Palace, London.

OncoRes Medical was announced as one of three ‘Entrepreneurs of the Year’ following a pitch overnight to an international audience that included Prince Andrew, the Duke of York.

The startup is developing an imaging tool to improve the outcome of breast cancer surgery, providing real-time guidance to surgeons by delineating breast cancer tumour from healthy tissue at a microscopic level.

Surgeons are provided with an image identifying residual cancerous tissue remaining within the breast so it can be removed during surgery, reducing the need for repeat surgery, which currently happens in 30 per cent of cases.

In a recent diagnostic accuracy study, the technology recorded 95 per cent accuracy in detecting cancerous tissue across a sample of 70 patients.

OncoRes Medical is seeking to raise $15 million in series B financing early next year to help it progress through FDA approval and pivotal clinical trials.

OncoRes Medical emerged as one of two finalists from last week’s Australian round of the international Pitch@Palace competition comprising 42 entrants, before progressing to the global finals in London.

Overnight, the team was given two minutes to pitch to a room of influential investors, tech entrepreneurs and industry professionals against 22 other startups.

While there is no cash prize associated with Pitch@Palace, it provides exposure to an influential global audience and guarantees the winners will be actively promoted to the Pitch@Palace network.

“Global recognition for our technology is hugely beneficial not only for OncoRes, but also for Australian and Western Australian medical research,” she said.

“Success at events like Pitch@Palace enable us to provide exposure to the high-level medical innovations that have been coming out of Australia for a long time, but have not historically received the support needed to grow and commercialise their technology locally”.

OncoRes Medical’s chief scientific officer Brendan Kennedy, who is affiliated with both the University of Western Australia and the Harry Perkins Institute of Medical Research, said it was fantastic for the company to receive such recognition.

“Our clinical studies and technical development have gone really well this year and this is the icing on the cake,” he said.

“We're looking forward to pushing on next year and moving closer to product launch".

“As a surgeon, the problem is not being able to identify the extent of a cancer at operation and thus the risk of leaving cancerous cells behind,” she said.

“We believe this technology has the potential to overcome this, leading to more efficient and effective surgery for the many hundreds of thousands of people who undergo cancer surgery globally each year”.

Moving forward, the team plans to use the technology in the fight against other cancers and to be used in robotic surgery.