Empty shopfronts in some of Perth’s high-profile retail strips are a sign of WA’s wider economic malaise. 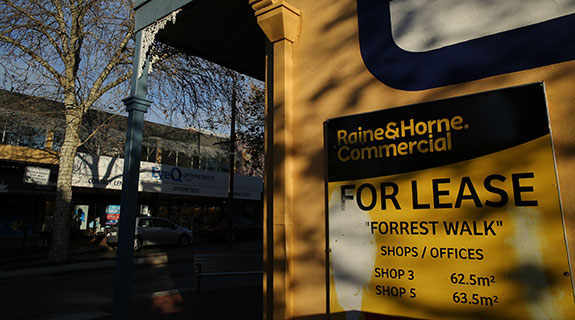 EVERY downturn brings a familiar set of economic problems, such as job losses and falling asset values; but this downturn is proving particularly difficult for retailers, as a stroll down some of Perth’s best-known suburban shopping streets makes clear.

Rokeby Road in Subiaco and Bay View Terrace in Claremont are very much old-school strip retail locations, flowing off the Perth to Fremantle rail line into high-quality residential areas.

At various times of Western Australia’s development these locales have been home to some premier retailers, with empty shops a rare sight – but not today.

The vacancy rate along both Rokeby Road and Bay View Terrace is running at around 15 per cent, with 15 shops closed on the Subi strip and nine closed in Claremont. Vacancies off the main street are probably higher, but that’s harder to see.

Interestingly, a third strip of shops on the same rail line, those along Napoleon Street in Cottesloe, does not appear to have been hit as hard with just one shop currently empty out of 30, a 3 per cent vacancy rate.

This unscientific test of retail vacancies, which consisted of walking all three on one of Perth’s recent blustery days, raises a series of questions, all of which must be of concern to retail landlords, shopkeepers and the respective local councils.

The common problems, and there’s not much that can be done about them, are the rise of internet shopping and the sharp slowdown in WA’s important resources sector, with the western suburbs of Perth home to some of the once better paid mining company executives who are now ‘between jobs’.

Just how severe the resources decline has become can be seen in the Bloomberg commodity index, which tracks the prices of 22 raw materials from oil to copper to iron ore with its latest reading a 13-year low, back to 2002 levels.

However, rents, council rates and labour costs are certainly not back to 2002 levels, which is why retailers and other businesses are feeling the squeeze.

More realistic rents is one move that could keep more shops open, and councils could help by improving services to encourage retail traffic along the historic strips, which are also suffering from the competition of more convenient shopping centres.

Rents are probably the biggest bugbear of shop owners; Subiaco retail rents are said to be roughly double those of Napoleon Street, with the difference showing up in the 15 per cent versus 3 per cent vacancy rate.

In time, Subiaco landlords will be forced to make concessions to their tenants, with early indications that rent reductions are being offered in isolated cases, including anecdotal evidence of one shopkeeper winning a 33 per cent reduction after threatening to not renew a lease.

Just how tough retailing has become in WA was demonstrated last week in an analysis of state economies by the investment bank, Goldman Sachs.

That study included the remarkable claim that retail jobs in WA had declined by around 20 per cent, a rate roughly three times higher than job losses in mining and double the rate of Queensland, the other state with a hard-hit resources sector.

It was the Goldman Sachs state-by-state review that led to my shopping strip walkabout and the discovery of a high number of empty shops – a picture likely to be repeated across Perth, and perhaps magnified in less affluent suburbs.

Finding a solution to the depressing scene of empty shops will not be easy. And it’s a fair bet that the situation will get worse before it gets better, because shoppers shy away from high-vacancy areas. Not only is there nothing to buy, empty windows are a miserable sight most people avoid.

As well as the state-wide slowdown and the dated nature of shopping strips compared with modern centres, car parking is a big issue in the older suburbs of a city with a well-developed car habit.

What needs to happen is for the interested parties to work together, because without a united effort everyone loses, including the local council (and certainly the landlords and shopkeepers).

NO commodity is better at producing conspiracy theories than gold. If it isn’t a plot by the world’s central bankers to depress the price, it’s a plot by China to hide its gold.

The first conspiracy theory, that involving the US Federal Reserve and the Bank of England, is old hat, though it lingers on in the internet chat rooms of gold bugs – those people who obsess about the importance of gold as the world’s ultimate reserve currency.

The second, China’s hidden gold, is a new one that lies behind a theory that China has a stash of gold much bigger than the 1,658 tonnes revealed last week in a rare report from the Peoples Bank of China, keeper of the country’s bullion.

The latest official gold report from China indicates an increase of 604t since 2009, a figure the gold bugs reckon is about 3,000t short of what the increase should be, because they believe China has been a major buyer of gold for the past decade.

Easy as it is to dismiss this latest ‘missing gold’ conspiracy as another flight of fantasy by the gold bugs, there is a local angle that makes the situation quite interesting; and that’s the newfound role of Australia as a direct provider of gold to China.

Until a few years ago, most of China’s gold flowed in via Hong Kong. Today it arrives from Switzerland, Hong Kong and Australia – but where it goes after delivery is one of the Chinese secrets that can make that country so difficult to understand.

A FINAL word on things in decline, this time one that might be good for your health, and that’s a surprise fall in the rate of alcohol consumption in Australia.

The ageing population could be the cause in a fall from an average of 10.6 litres of alcohol per head in 2009 to 9.88L last year with all categories down, led by beer, which has dropped by 3.6 per cent.

Wine consumption is down 1.5 per cent and spirits 1.3 per cent. The only category to rise over the past five years is cider – perhaps a sign that some people have found a new way to get their apple a day.