It has been 90 years since Clough Ltd was founded, and Harold Clough has been an integral part of the company’s story. 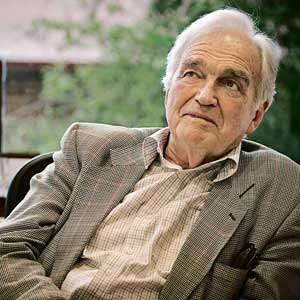 HE may be aged 83 years, but there's still a glint in his eye and he goes into the office every day.

Meeting Harold Clough today, the abiding impression is of a man who retains enthusiasm and passion for his work.

His modesty belies his track record as one of the great figures of post-war business in Western Australia, turning a small building firm into one of the state's top engineering and construction contractors with extensive international operations.

That company, Clough Ltd, turned 90 last month and its former chairman and chief executive was invited to speak at a staff and stakeholder functions to help celebrate the occasion, even though he severed his ties two years ago.

When Mr Clough goes into the office these days, it's to the very modest Nedlands premises of his family company McRae Investments, rather than the city office of Clough Ltd.

There is no pretence with Mr Clough: he occupies a small office, uses a battered but trusty black satchel and drives an average car, yet his achievements far outweigh the many Perth entrepreneurs in fancy suits and flash cars.

When reflecting on his career, Mr Clough comes alive when he starts talking about some of the innovative engineering projects he worked on during the past 50 years, such as the Narrows Bridge, which is pictured next to his desk.

His personal journey is closely intertwined with the business his father, Jack, and uncle, Bill, established as a building firm in 1919.

The growth and diversification of that business is, in turn, closely intertwined with the state's economic development.

Mr Clough joined the business in 1954, when it had just three staff, including his father.

By that stage, he had travelled to California after receiving the Fulbright Scholarship for engineering. He studied at Berkeley then worked for engineering firm Bechtel, opening his eyes to some of the opportunities for the family business.

One of the company's first big breaks came in 1955, when it won the contract to build the National Mutual Building at 81 St Georges Terrace. The 12-storey building was the first high rise to be built in Perth since World War II.

Its next big break was winning the contract to build the Narrows Bridge, in joint venture with Danish company Christiani & Nielsen.

"That was the project that took us from a building company to an engineering company," Mr Clough says.

He recalled that, up to the 1950s, all public infrastructure was built by the government's public works department, and The Narrows was a radical departure.

The opportunity arose only because of Mr Clough's business development initiative.

"When I was with Bechtel, it made me realise how little these firms knew about costs in foreign countries. I knew that as a local partner we could add a lot of value," he says.

"On that basis I got a handbook from the Institution of Engineers in the UK and wrote to half a dozen bridge builders that had advertised in that. We got two responses and decided to go with Christiani & Nielsen."

In the 1960s, Clough rode the iron ore boom. Again, it was helped by linking up with an international partner, in the form of Royal Netherlands Harbourworks.

The joint venture's first project, in 1965, was Hamersley Iron's Parker Point jetty and since then they have completed 12 marine construction projects.

Clough was also an early mover in the oil and gas sector, winning a submarine pipeline contract for the Barrow Island oilfield development in 1965.

Mr Clough recalls that his company was able to employ home-grown ingenuity to address the challenges of this project, and in particular the fact that it didn't have a pipelay barge.

Its solution involved connecting pipeline sections on the seabed, which prompted the Texan who was managing the overall project to comment that: "you've turned this thing into a plumbing job".

Clough expanded its oil and gas activities in the 1970s and 1980s, winning work on landmark projects such as Woodside's North Rankin A platform, which was its first major offshore construction project.

It has since won work in Indonesia, the North Sea, New Zealand, Thailand and the Gulf of Mexico, among other locations.

As a member of the Kellogg joint venture, it has also worked on the North West Shelf venture's expansion project and Chevron's Gorgon project.

On the corporate side, Clough listed on the stock exchange in 1998. The Clough family retained a majority shareholding until 2004 when South African group Murray & Roberts bought into the company.

M&R progressively upped its stake, as it was forced to pump more money into Clough to deal with financial problems. The family sold out of the business in 2007.

Over the past two years, Mr Clough has been working with his son, Bill, who has interests in several mining companies, including Mirabella Nickel, which is developing an iron ore project in Brazil.

Mr Clough has been closely involved in a privately owned nickel project in Indonesia, which was briefly very profitable when nickel prices were high but has since been mothballed.

Outside of the engineering business, Mr Clough has been a supporter of university research and technology venture.

His involvement with the University of WA, where he served on the senate, actually led to the establishment of one of WA's first venture capital funds, TechStart Ventures.

He has seen many technically brilliant innovations in WA but has learned the hard way that achieving commercial success is a greater challenge.

People trying to commercialise new innovations usually prepare a range of projections on how long it will take to achieve success in the market.

"You take the most pessimistic assumption, multiply that by 10, and that's how long it will take," he says.