Middle Island Resources’ punt that the ground surrounding its Sandstone gold project in WA might be harbouring rich pickings appears to be paying off after the Perth based company experienced some extreme success with the drill bit recently. The best result from the latest drill campaign came in at an exceptional 4 metres grading nearly three ounces to the tonne gold from the McClaren prospect. 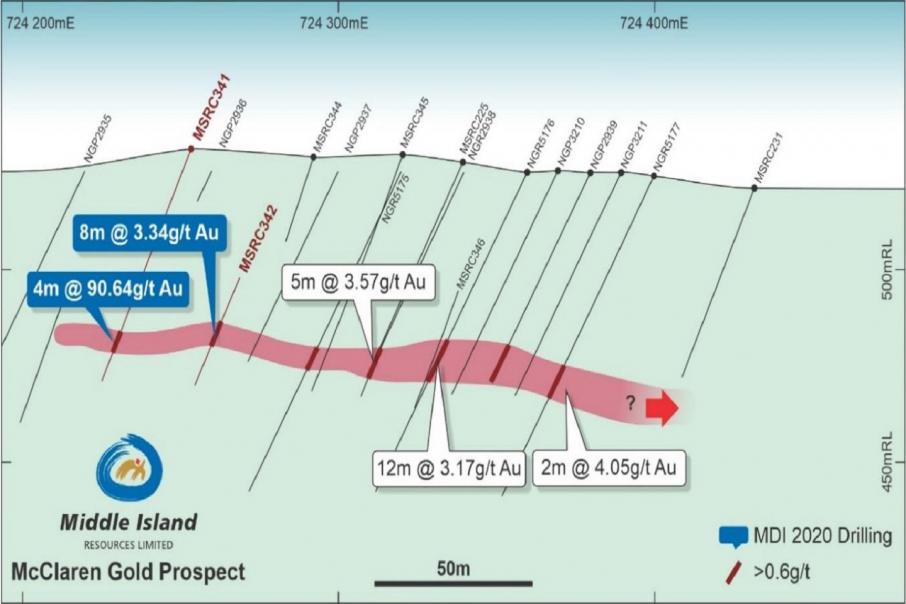 Middle Island Resources’ punt that the ground surrounding its Sandstone gold project in WA might be harbouring rich pickings appears to be paying off after the Perth based company experienced some extreme success with the drill bit recently. The best result from the latest drill campaign came in at an exceptional 4 metres grading nearly three ounces to the tonne gold from the McClaren prospect.

Another solid result from McClaren, which is about 600km northeast of Perth, came in at 8 metres grading 3.35 grams per tonne gold. The company said this week that McClaren may even shape up to be a standalone open pit in its own right that would act to supplement the nearby Sandstone gold project.

The bonanza results from McClaren are from adjacent drill holes and samples are from four metre composites, which are yet to be broken down into the standard one metre samples. The company also averaged out its latest results at a slightly higher cut-off grade 0.6g/t gold, which would seem to be in a sign of good faith in its grade.

Many exploration companies use a 0.5g/t cutoff for RC drilling and sometimes even 0.1g/t for reconnaissance methods such as air core.

Middle Island has only drilled ten holes into McClaren so far, which is just 2.5km from its Sandstone processing plant and importantly, it already sits on a mining lease.

The McClaren prospect has always been a standout out with residual, manganese-rich, lateritic ironstone hosting abundant coarse, platy free gold appeared to indicate something was nearby according to Middle Island.

The Ridge and McIntyre prospects are nestled around McClaren and all were historically pinned by reconnaissance drilling. Old prospecting has also turned up fine gold around the sub-cropping ironstones with results going an impressive ounce to the tonne.

The primary gold mineralisation at McClaren is hosted by a near-flat lying ironstone, which starts at about 50m below the surface and currently extends about 250m to 300m in strike. The lode is 4m up to 20m thick, presently defined to a lateral extent of 100m and is still open to the northwest and southeast according to Middle Island.

Nearly 13,000 metres of RC drilling is planned to roll out across 14 very prospective open pit gold targets that according to the company, have the potential to lift existing mineral resources ahead of another update to the project’s pre-feasibility study.

Two Mile Hill is the flagship Sandstone project deposit, where a near-vertical gold mineralised tonalite spans about 250m by 90m and plunges to as-yet-unknown depths but is at least 700m deep.

Drilling at Two Mile Hill, has returned a new extensional intercept, outside the tonalite in basalt.

This new result is well outside the optimised A$2,500 per ounce pit shell, which would seem to provide encouragement that further extensional results may boost the economics of the project.

According to Middle Island, optimisation studies indicate the northeast quadrant of the Two Mile Hill deposit is sensitive to the addition, or subtraction of resources, particularly for any mineralisation within the basalt. Therefore, any further encouraging results may deepen the overall pit by at least 20m and as much as 40m, according to management.

With a 600,000tpa CIP treatment plant already on-site and the ability to restart it at an estimated cost of just over $10 million, the company has shaken off the Coronavirus blues and is well funded to keep the rods turning as it shoots for an economic ore body that can be run through the existing plant without too much fuss.