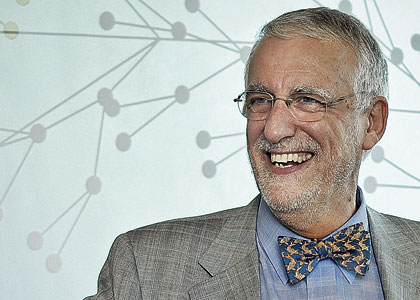 FAMILY TRUST: Carrillo Gantner is in the third generation of the Myer family and is chair of the Sidney Myer Fund, among other professional director roles. Photo: Grant Currall

BORN into the iconic Myer dynasty, Carrillo Gantner did his best to avoid the family business by training as an actor and pursuing a career on the stage.

He pursued qualifications in arts administration and a masters in fine art, studies that were followed by extensive experience running numerous arts organisations and production companies.

Eventually, however, Mr Gantner stepped back into the family business, becoming involved in the philanthropic side of things as chair of the Sidney Myer Fund.

Each year, the Sidney Myer Fund (established in the 1930s) and the Myer Foundation (1959) distribute $11 million to charities.

“We believe that a creative society is a more dynamic and interesting one because through the arts we learn about our own lives and the lives of others and get alternative models for how we might live our lives,” Mr Gantner said.

“We think people aspire through a range of tools – religion and culture is another important one; we aspire to be more than economic beings.

“Whether we know it or not, we subscribe to the Richard Florida theory of creative cities, that the cities in this world that are doing the best are the ones that invest in creativity … and the arts are a very important part of that.

“They are good for the economy, they are not only a big employer, but the non-profit arts are the creative feeding grounds for a whole range of creative industries, which include television and film, IT, advertising, the fashion industry and a whole host of others.”

Mr Gantner said each generation of the Myer family had introduced a new focus for the two charitable organisations, with his generation keen on environmental issues.

“I am not quite sure what the next generation will have, but philanthropy is very much a part of the culture of the family, it is sometimes called the glue that holds people together,” he said.

Not all the causes that family members are passionate about can be supported by the Sidney Myer Fund and the Myer Foundation, so 13 private ancillary funds have been established across the different families under the Myer family tree to grow private family support and allow family members to direct support to family-specific causes.